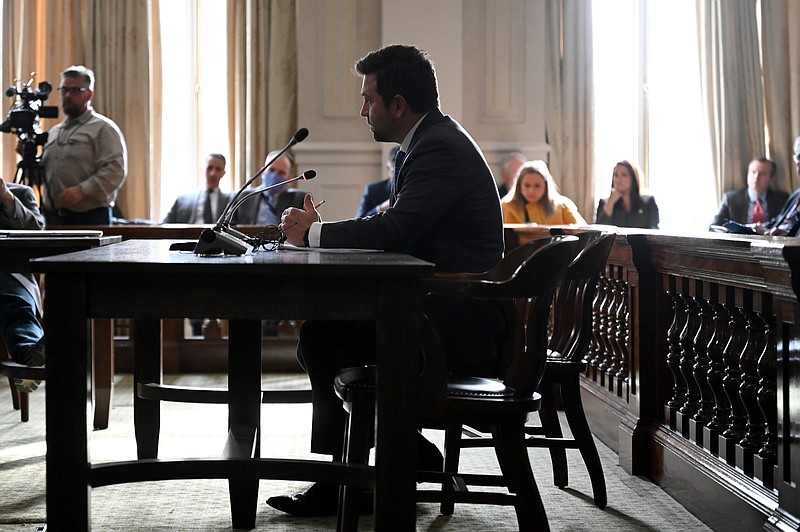 Arkansas Senator Jonathan Dismang, R, answers questions about SB1 during discussion of the bill in the Senate Committee on Revenue and Taxation on the first day of the special session on Tuesday, Dec. 7, 2021. See more photos at arkansasonline.com/1208session/..(Arkansas Democrat-Gazette/Stephen Swofford)

Arkansas is competing against Alabama and Mississippi for the proposed $3 billion project and "we're in the driver's seat and we're in the lead," Wallace told the Senate tax committee.

This legislation "keeps us in the game" and gives the state an opportunity to win the project that would create 900 jobs with an average annual salary of $106,000, state Department of Commerce Secretary Mike Preston told the House tax committee.

The committees' actions came on the first day of the special session called by Republican Gov. Asa Hutchinson primarily to enact what potentially would be the largest tax cut in the state's history.

Dismang told the Senate committee that SB1 would foster income tax fairness, simplification and competitiveness, and benefit every taxpayer.

"I believe the plan strikes a fair balance between working Arkansans and also job creators," he told the Senate tax committee. The state has the most complicated income tax structure in the nation, he said.

Dismang said Arkansas is falling behind its neighboring states with its tax structure and reducing the top individual income tax rate from 5.9% to 4.9% in the next four years would help close that gap. Tennessee and Texas don't have state income tax.

"It looks like for the foreseeable future we can afford these tax cuts," he said.

"The impact on the state budget is the big issue," he said, citing estimates by the Washington, D.C.-based Institute on Taxation and Economic Policy that the cuts eventually would reduce revenue by about $600 million a year.

Huddleston said too many items in the state budget are underfunded or not funded, ranging from reducing the waiting list for care for the developmentally disabled to the shortage of Department of Human Services caseworkers.

"We are doing the best we can," he told Huddleston. "You are never satisfied. Tell us how much you want."

Huddleston said his first suggestion would be for the Legislature not to approve the cuts.

The identical bills aimed at persuading U.S. Steel to expand in Mississippi County would create a new project type for steel manufacturers to qualify for an income tax credit for waste reduction, reuse or recycling equipment.

State law now provides an income tax credit for 30% of the purchase price of waste reduction, reuse or recycling equipment for a qualified manufacturer of steel.

The project also would be required to have a positive cost-benefit analysis from the Arkansas Economic Development Commission and the Department of Finance and Administration; an incentive agreement with the commission with performance and clawback provisions; begin on or after Jan. 1, 2021; and a closing date of necessary debt and equity financing before July 1, 2023.

The income tax credits could be for up to $11 million a year for 14 years and the state could purchase them back at a 20% discount, or $8.8 million a year, said Wallace.

A qualified project that has a public retirement system as an owner or shareholder will divide their tax credits between the credits that can be sold to the state and the credits that will be claimed on the taxpayer's return, according to the finance department.

The Joint Budget Committee on Tuesday morning endorsed Senate Bill 5 by Senate President Pro Tempore Jimmy Hickey, R-Texarkana, and House Bill 1002 by House Speaker Matthew Shepherd, R-El Dorado, that would allow the transfer of up to $50 million from the general revenue allotment reserve fund to the Quick Action Closing Fund for economic development investment incentives to a qualified steel manufacturer.

The $50 million would provide infrastructure for the site of the U.S. Steel expansion, said Rep. Lane Jean, R-Magnolia.