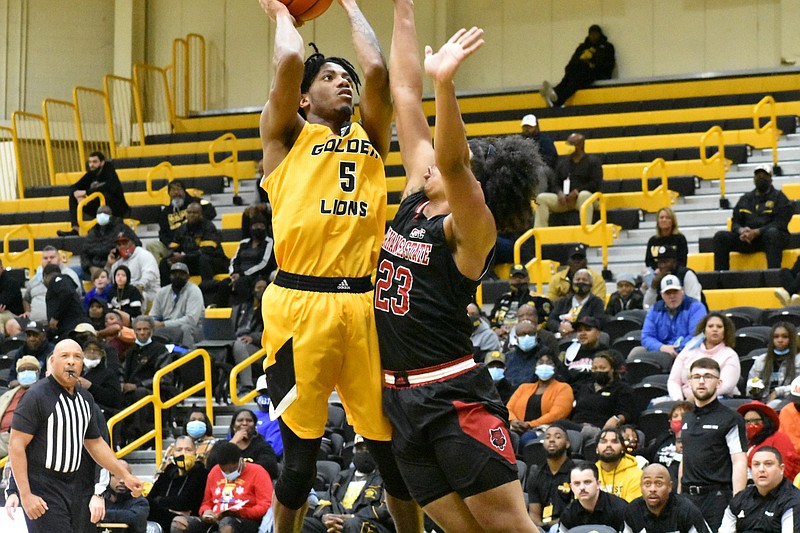 DeQuan Morris of UAPB shoots a jumper against Marquis Eaton of Arkansas State in the first half Wednesday at H.O. Clemmons Arena.

DeQuan Morris returned to the University of Arkansas at Pine Bluff lineup for the first time in nearly a month Wednesday.

Sills scored 25 points, Marquis Eaton had 20 of his 22 points in the second half, and the Red Wolves overcame a 10-point halftime deficit to knock off the Lions 84-73 at H.O. Clemmons Arena.

Arkansas State (7-2) avenged a 1-point loss at home to UAPB last year and earned its third straight victory in its first visit to Pine Bluff. The Red Wolves shot 30 for 59 (50.8%) from the floor, including a 6-for-18 clip from the arc, with Sills and Eaton taking over the second half.

UAPB (1-10) has lost three straight after winning its last home appearance on Nov. 29 over Arkansas Baptist College. The Lions led by as much as 35-21 with 7:03 left in the first half after Brandon Brown grabbed one of his 11 rebounds for a putback.

Brown, who had started in Morris' absence, led the Lions with 21 points off the bench for his fourth double-double (at least 10 points and 10 rebounds) of the season. Brown shot 9 of 17 from the floor.

Morris scored 19 points, shooting 7 of 11, after being sidelined with a knee injury.. Trey Sampson added 11 points and Shawn Williams had 8.

Sills, the University of Arkansas transfer and point guard, had 15 points at halftime, but left it up to Eaton and the Red Wolves' fast break to key a second-half surge.

Sills brought a relatively quiet UAPB student section to their feet when he sank a 3 off a crossover to give Arkansas State its first lead, 61-59, since it was 6-4.

Brown helped the Lions avoid a blown opportunity when he rebounded a wide-open missed dunk by Morris and put it in to draw UAPB within 77-71 with 2:02 left, but that was as close as the Lions would come.

Norchad Omier finished with 14 points and 12 rebounds, Caleb Fields scored 13 and Keyon Wesley pulled down 10 points to go with 5 points for the Red Wolves.

UAPB will take on its third Big 12 team in 2 weeks when it visits the University of Texas for an 8 p.m. tipoff Tuesday. That game will air on ESPNU.

Green, the 6-2 redshirt junior guard and Texas A&M University transfer, was named Player of the Week. She averaged 13.5 points and 7 rebounds in two games the past week, a win over Tulane University and loss to the University of Miami.

Hudson, a 5-8 senior guard who last played at the University of Tennessee-Martin, averaged 12.5 points, 2 assists and 1.5 rebounds per game to earn Impact Player of the Week honors.

UAPB will visit the University of Alabama at Birmingham next Wednesday. 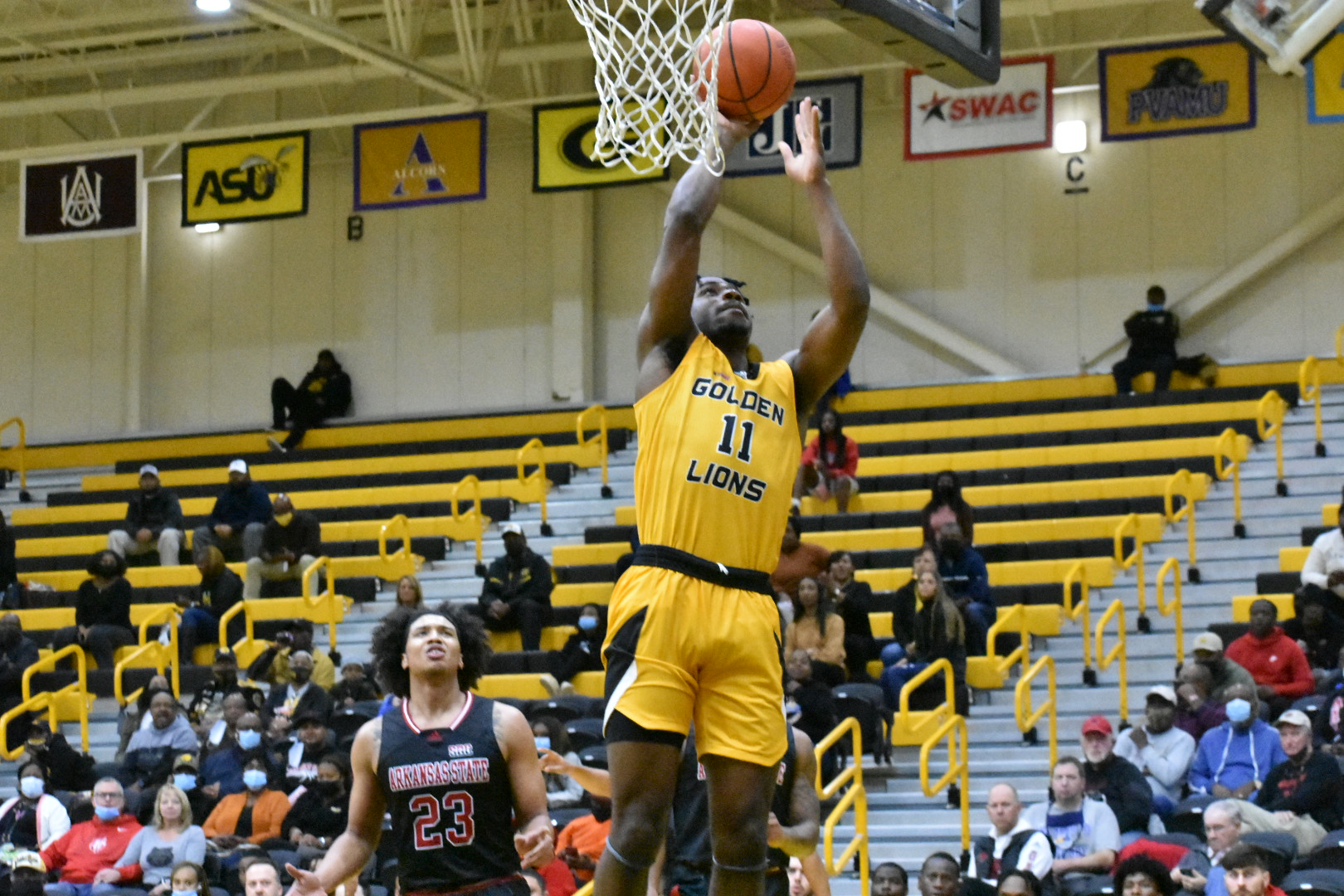 Brandon Brown of UAPB shoots a layup as Marquis Eaton of Arkansas State looks on in the first half Wednesday at H.O. Clemmons Arena. 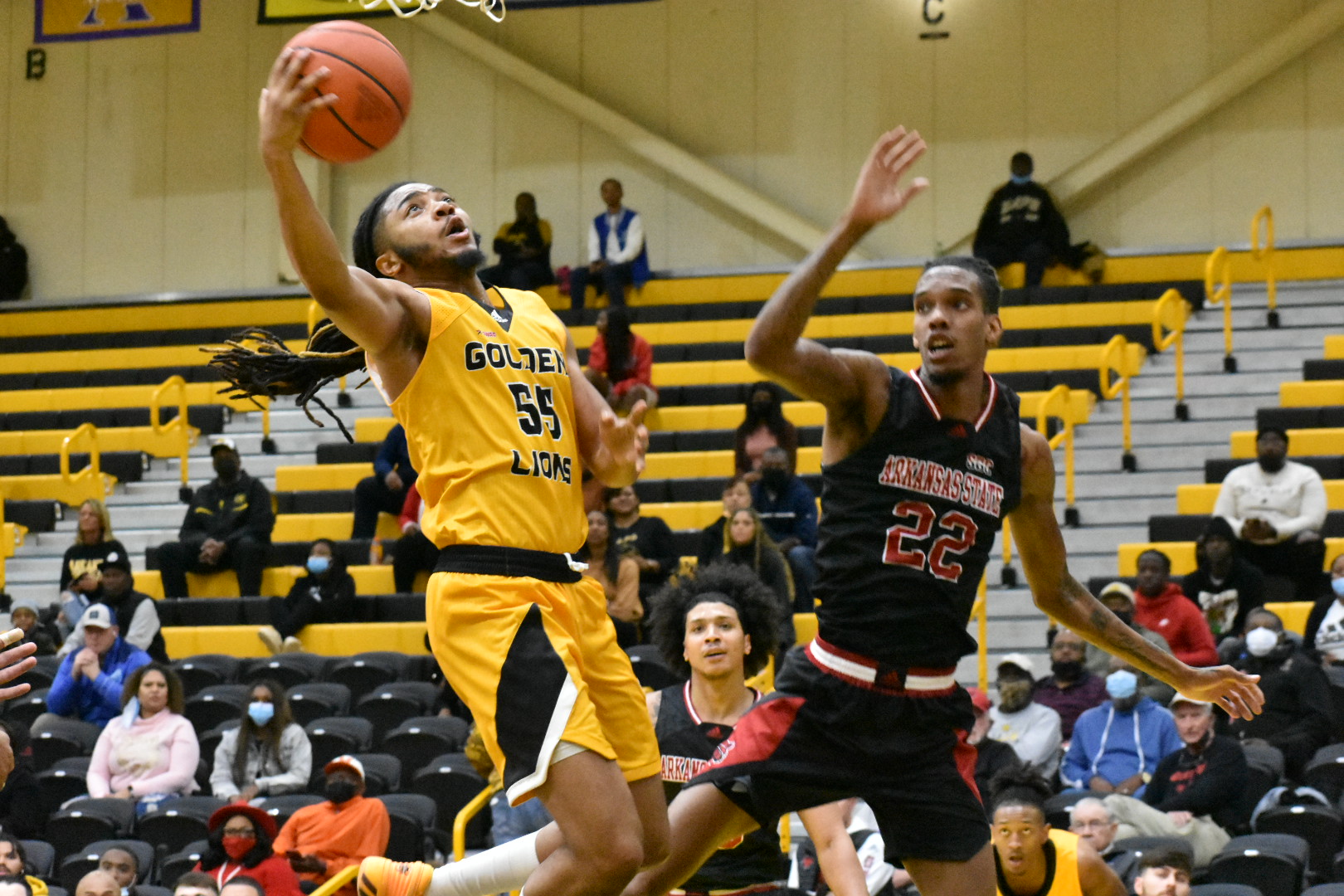 UAPB guard Shawn Williams drives to the basket against Keyon Wesley of Arkansas State in the first half Wednesday at H.O. Clemmons Arena.