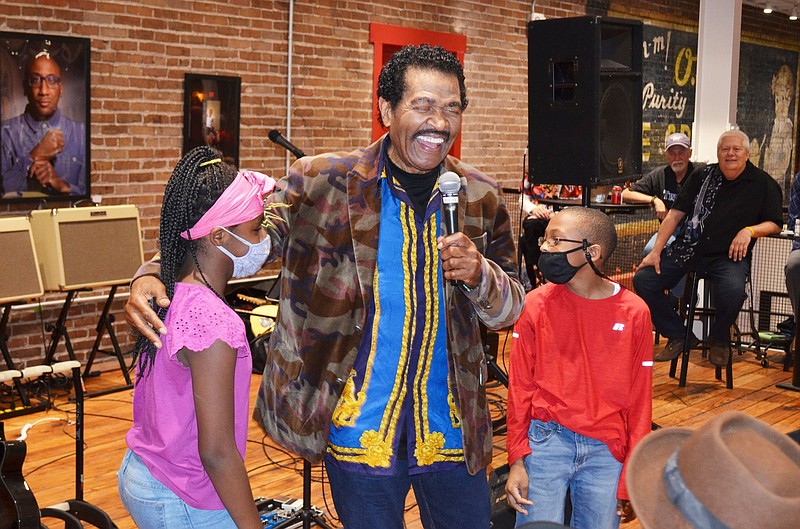 As always, Bluesman Bobby Rush recognized and encouraged the young people in his audience. (Special to The Commercial/Richard Ledbetter)

Bobby Rush returned to his childhood home of Pine Bluff, bringing his autobiography, “I Ain’t Studdin’ Ya” to the ARTSpace on Main, 623 S. Main St.

The Delta Rhythm and Bayous Alliance sponsored the “Catfish Friday Blues & Soul Night” combining art, literature and music, which ran until the evening.

The threat of impending storms didn’t dampen the enthusiasm of a diverse crowd in the loft gallery of the ARTSpace, a facility of the Arts and Science Center for Southeast Arkansas.

Folks from 8 to 80 came to celebrate the region’s rich heritage with soul food, folk art, lbues music and a spectrum of cultural literature.

A “Freedom, Blues & Chitlin’ Circuit Art Show” made up of mixed media, paintings and blues artist portraits done by University of Arkansas at Pine Bluff students and faculty was on exhibit.

“We’re a non-profit working to develop a travel corridor between Pine Bluff and the Greenville/Leland, Mississippi area,” said organizer and emcee, Jimmy “Catfish” Cunningham. “We want to highlight the music, arts and geographical distinctions in what has now been named by the states of Arkansas and Mississippi as the Delta Rhythm & Bayous Highway along U.S. 65 and 82 between Pine Bluff and Greenville.” He welcomed the crowd to “Catfish Friday Blues & Soul Night.” “This is a wonderful way to celebrate the music and heritage of our area and what better way than with the king of the ‘Chitlin’ Circuit,’ Bobby Rush,” Cunningham said. “Bobby made his bones over seven decades working the juke joints and blues festivals up and down the highways of the South.” Cunningham went on to tell of local efforts.

“One of the things we are doing is the development of an arts district in downtown Pine Bluff between Second and Forth avenues and Walnut and Alabama streets,” Cunningham said. “Within those few blocks you had the Theatre District on Second street while Fourth played a major role as a transportation hub. Third street had all the juke joints, including the Gala Room, Eddie’s Bar & Grill, the Green Door and Jittie Bugs.” “We want to highlight the folks who began their careers in Pine Bluff and Bobby Rush is one of those as well as one of the last living legends of the blues who began his professional career here earning his first dollar as a Blues man in Jittie Bugs,” Cunningham said.

Cunningham acknowledged Rush’s storied career recognizing his 397 recordings, six Grammy nominations resulting in two Grammys and 18 Blues Awards. Rush was also awarded a doctorate of music degree from Memphis’ Rhodes College on May 15 of this year.

During his portion of the program, Rush told his captivated audience about his history.

“My first experience on stage was right here, and I want Pine Bluff to know this is where I got my start. When I began I never could have imagined that one day I’d be back here talking about my book and my career. I played juke joints here until Sheriff Paint Booker locked me up,” Rush said.

He explained how he left the South after that and headed to Chicago where he thought he would find freedom as a Black man in the North.

“My first job in Chicago in 1951 was working for Caesar Capone, Al Capone’s brother. We played every night from behind a screen because White folks wanted to hear our music but they didn’t want to see our faces,” Rush said.

Rush went on to say, “When you look at some of the crap I’ve taken over the years, I know you’ll relate to similar situations in their own lives. I want folks to know that just because you’re Black or have come through hell or maybe haven’t got the good breaks, never give up. I started out in Pine Bluff playing for three dollars a night. Then I went up to seven dollars for a full band. The point being, if I can make it out of that, you can too. You don’t have to sit around feeling sorry for yourself. Get out there and make a difference with your life.” Rush related how “I Ain’t Studdin’ Ya” continues to sell well.

“I sold 1,800 books at a private event in Jackson, Mississippi last night,” he said.