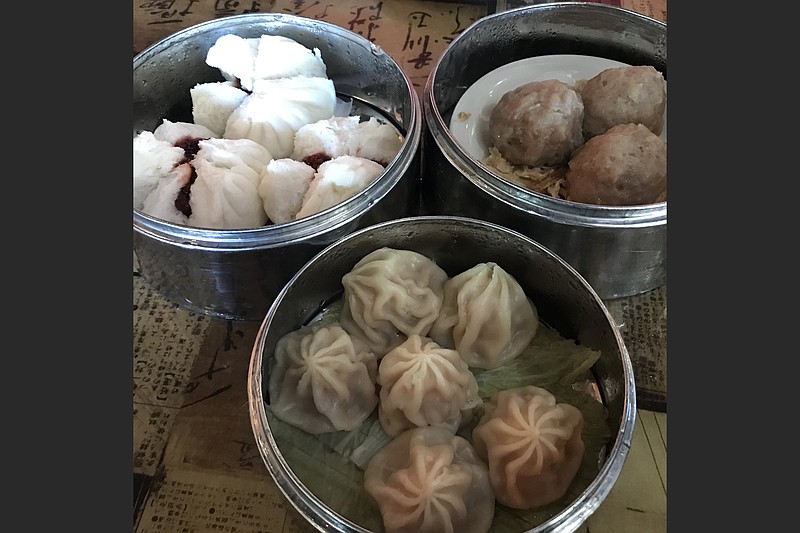 Dim sum, like these steamed meatballs (clockwise from top right), pork dumplings and barbecue pork buns at the original west Little Rock Chi’s, will be on the all-day menu at Chi’s Baohouse. (Democrat-Gazette file photo)

We'd previously reported that Chi Restaurant Group had been planning to put a second location of Lulu's Seafood Kitchen in the former La Madeleine Country Fresh Cafe, 12210 W. Markham St., Little Rock, but that the covid-19 crisis contributed to any number of delays.

Now, says managing member Jacob Chi, he is instituting a whole new fast-casual concept in the offing for that space: Chi's Baohouse, with a target to open in February or March. That, he says, "depends on what it takes to get equipment in."

"We were looking forward to bringing Lulu's to that location, but the economics of seafood changed dramatically during the pandemic," Chi explains, adding that there will still likely be another Lulu's location somewhere, "when things even out a bit."

The four-prong menu will feature:

◼️ All-day dim sum, which had been served for weekend brunch-lunch in the original Chi's at West Markham and Shackleford (now a clinic for his brother, Jasen, a rheumatologist) and off and on at Chi's Chinese Cuisine, 17200 Chenal Parkway, Little Rock.

◼️ A selection of signature Taiwanese baos, lotus-leaf-based buns surrounding meat, bean paste and other fillings. That'll include the barbecue pork bun that people are used to from the dim sum carts, plus a number of filled buns that are "a little bit more along the lines of what Chinese families in Taiwan are used to eating," Chi explains.

◼️ Three or four noodle soups, including his mother's recipe for beef noodle soup, plus pho and ramen options.

◼️ A range of boba teas.

Chi says the inspiration for the menu comes from his parents' Taiwanese origins (materfamilias Lulu Chi who died in 2018, had been running Chinese and other Asian restaurants in Little Rock since the late '70s, with help from paterfamilias Bill) and their holiday and special-occasion dishes.

Chi says he has a Rogers Baohouse in the works, to open four to six months farther down the line, with plans for additional outlets, including one in downtown Little Rock, which will eventually go into the ground floor of the building the family owns at 319 W. Second St., across from the Pulaski County Courthouse.

All those restaurants will be open until 8 p.m. Christmas Eve, and closed Christmas Day. See our (still incomplete) list below.

Meanwhile, speaking of bao, construction delays have held up the opening of the second location of Three Fold Noodles & Dumpling Co., in the former Panera Bread space in the Pleasant Ridge Shopping Center, 11525 Cantrell Road. Look now for a target opening of what the Three Fold folks colloquially refer to as "Three Fold West" in February, says Three Fold manager Rebecca Yan. The original, now at 611 S. Main St., Little Rock, is doing well in the meanwhile, she says.

Dickey's BBQ Pit, 9401 N. Rodney Parham Road, Little Rock, apparently was open Dec. 9 — a post on the Facebook page (facebook.com/DickeysLR) showed photos of a slab of ribs and the legend, "Just taking some ribs out of the pit." However, when we ran by Monday, the door was locked, the lights were out and several calls during business hours to the listed phone number, (501) 223-3425, produced only a rapid busy signal.

Co-owner Peter Loibner, looking to open Blackberry Market, a cafe and bakery, with his wife, Whitney, in March or April in North Little Rock's Argenta District, fills in some additional details, including the street address — 315A Main St., the left side (as viewed from the street) of a current facade-less hole in the block that used to be a furniture store. (The right side, we're told, will be an auxiliary space for the Argenta Community Theater.) Peter Loibner has 17 years at Starbucks under his belt; Whitney Loibner, he says, has substantial food experience but not in the restaurant business. His sister operates cafes serving breakfast and lunch in the Chicago suburbs of Glen Ellyn and La Grange, Ill.; the Argenta menu will be similar (baked goods, a range of breakfast options, soups, salads and sides; visit blackberry.cafe), but Loibner says he's looking at keeping his cafe open later than 5 p.m., in part to take advantage of Argenta's active nightlife (for example, Argenta Community Theater shows and Simmons Bank Arena concerts). The cafe's Instagram and Facebook pages (instagram.com/blackberry_ar and facebook.com/blackberryar, respectively) are up; a website is in progress.

Meanwhile, across Main Street, Nana's Organix, a vegetarian/vegan restaurant and grocery store operating inside Galaxy Furniture, 304 Main, announced Sunday via Facebook that "it is with Great Sadness" that it will be closing Dec. 30. "We moved to Argenta in hopes of filling a grocery void in the community after two long years of trying, [but] we can no longer operate without being supported by Argenta," the post continues. Groceries are in the process of liquidation; most in-store items are going for half off. The phone number is (501) 864-6148.

It could be yet another week before we see the opening of TOPDOG Hot Dogs and Beer in the "shotgun" space at 308 Main St., Little Rock, that had previously been a deli outlet for next-door Bruno's Little Italy and subsequently Donuts & Deli. Management says they are hoping to be running before Christmas, and to be fully operational before New Year's Day. The website, topdoghotdogcompany.com, shows the food lineup to include 100% Angus beef hot dogs, Korean-style corn dogs, "smash time" burgers, a cheesesteak and a chicken sandwich; presumably it will also serve beer (there's a pending-license announcement posted on the front door).

We reported a couple of months ago that Ben Brainard, late of Yellow Rocket Concepts, would be the co-owner/operator of Little Rock's first Big Bad Breakfast, in the former Arvest Bank building at West Markham Street and Bowman Road, behind David's Burgers. According to business reporter Noel Oman, that's one step closer to happening: A building permit has been filed to remodel 3,849 square feet of existing commercial space at 101 S. Bowman Road for $578,850. Brainard has forecast a target opening for early 2022.

Oman has also spotted a building permit for $140,000 for a Pizza Hut carryout/delivery space in Mabelvale Plaza.

Here's our admittedly limited list of places that will be open on Christmas Eve and/or Christmas Day, or are offering advance Christmas dinner prep. To put your establishment on the updated list Dec. 23, please contact us ASAP via the email address below. With Christmas Eve on a Friday and Christmas on a Saturday this year, it's likely that more places will be open even in the midst of a pandemic than otherwise might.

Some of our information comes from restaurants, some from various forms of social media and so we cannot guarantee its accuracy. In the past, most hotel restaurants stayed open on Christmas Day, but mid-pandemic, that is unclear.

So we definitely recommend double-checking to avoid disappointments before venturing out; most, if not all, of these places strongly recommend making reservations. And remember that we're still in the midst of a pandemic, and situations are subject to change with very little notice.

We suspect there are more restaurants and caterers prepping Christmas dinner for the cooking-challenged or uber-busy, but there are the two we've actually seen:

◼️ Denny's, 24/7, including Christmas Eve and Christmas Day, but it's a good idea to check ahead.

◼️ McDonald's, open Christmas Eve for sure, but Christmas Day is not guaranteed; hours may vary.

◼️ Starbucks, some outlets will be open.

◼️ Waffle House, of course, is open 24/7/365, but in mid-pandemic, staffing problems could curtail hours.