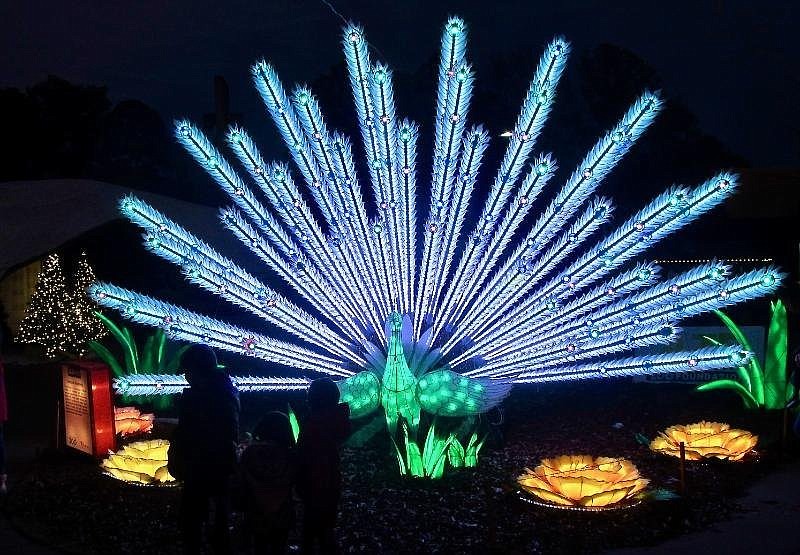 A lighted bird spreads its feathers near the entrance to GloWild. (Special to the Democrat-Gazette/Marcia Schnedler)

The Little Rock Zoo is playing host this holiday season to two dozen giant pandas, along with a killer whale and a gargantuan octopus.

Normally far off the radar of Arkansas' largest zoo, these glow-in-the-dark creatures are attracting families and others to War Memorial Park. They're portrayed in three of the 30-plus tableaux in GloWild, an extravaganza open on 17 more evenings through Jan. 15.

The pandas, orca and octopus are large silk lanterns that depict the living species they resemble. So are the other mammals, birds, reptiles, amphibians, sea life and insects in this bountiful menagerie illuminated by 50,000 LED lights.

"We wanted to bring something new and exciting to the Little Rock Zoo," says Susan Altrui, the zoo's director. "We also wanted something fun and engaging for families during the holiday season. The silk lanterns are true works of art, created by our partner Tianyu Arts & Culture. They hail from the traditional lanterns lighted during the Chinese New Year."

Altrui reports that GloWild "is attracting people of all ages — couples, parents with kids, grandparents with kids and young adults. The light show has really helped our zoo bridge generation gaps."

Visitor favorites vary widely, she says: "Some people really like the interactive features in the Nature Play Area. Others really like the pandas or the sea creatures such as the large octopus or the crab that blows bubbles. Guests are also having a lot of fun with the photo stops. I'm a big fan of the rhinoceros family because our zoo has a new baby rhino."

Some lanterns replicate animals kept at the Little Rock Zoo. Others do not, including those of all the sea species. There is a reason for displaying the pandas and other creatures absent from the zoo's collection, as Altrui explains:

"GloWild features endangered and threatened animals and also includes information about them for guests to read along the path. The show not only takes you into a world of light, but also educates you about the plight of many of these beautiful animals to understand more about their perils."

Chicago-based Tianyu Arts & Culture is a subsidiary of a Chinese company based in Sichuan Province. The Arkansas Zoological Foundation and Keep Arkansas Beautiful are providing support. 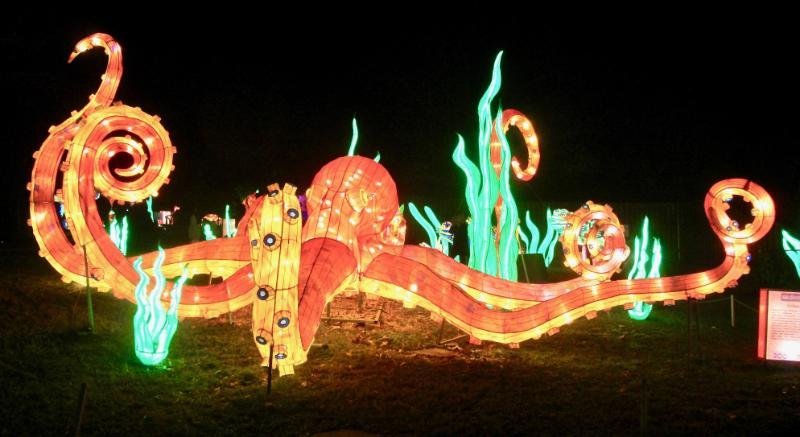 The huge orange octopus is a favorite of some Little Rock Zoo visitors. (Special to the Democrat-Gazette/Marcia Schnedler)  GloWild has separate admission fees from the zoo's regular day visits, which continue to operate. The evening program requires paid admission even from zoo members, although at a lower price than for the general public.

Visitors are required to wear masks indoors to the Africa Cafe and gift shop, both open during evening hours. After-dark parking is free. Along with the lights, says Altrui, "visitors can catch views of some of our late-night party animals," including spider monkeys, alpaca and elephants.

GloWild has been enough of a success so far, she adds "that we plan to bring it back bigger and better next year. We've gotten great feedback from our guests and we are already talking about ways to enhance the show for 2022. I think we have found a new holiday tradition for Little Rock."