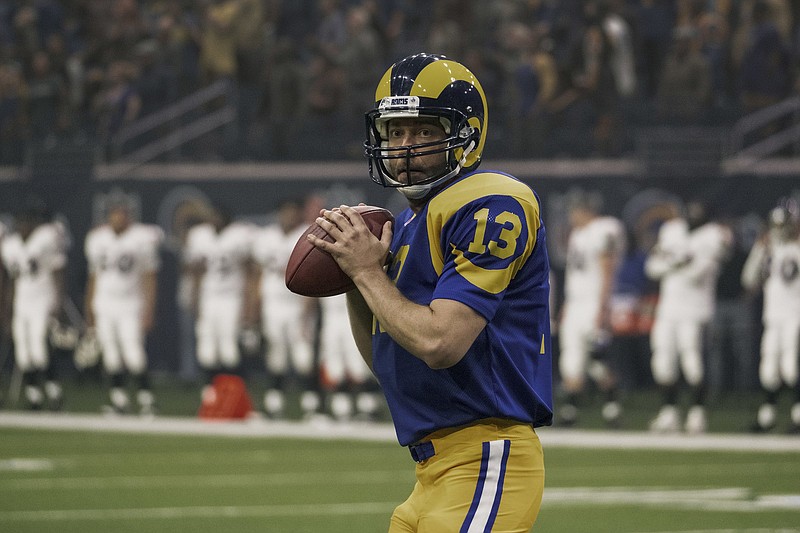 The rise of Kurt Warner (Zachary Levi) from grocery store clerk to starting quarterback of the Los Angles Rams is detailed in the inspirational “American Underdog” by brothers Andrew and Jon Erwin.

Rating: PG, for some language and thematic elements

NFL quarterback Kurt Warner's journey from stocking shelves at a grocery store in Cedar Falls, Iowa, to being inducted in the Pro Football Hall of Fame in Canton, Ohio, is nothing short of remarkable. The personable, faith-driven graduate of the University of Northern Iowa spent four years after college fearing his dream of playing pro football was over. But when a near providential opportunity came his way, Warner went from the supermarket to the Super Bowl.

"American Underdog" sets out to tell the story of Warner's rise to football stardom, chronicling the numerous highs and lows that made his journey such an inspiration. To add a little more context to his career, after finally getting his foot in the door, Warner would go on to play 12 seasons in the National Football League. As quarterback for the St. Louis Rams he led a powerhouse offense which became known as "The Greatest Show on Turf." Warner would go on to win two league MVP awards and was named the Most Valuable Player of Super Bowl XXXIV.

The pointedly titled "American Underdog" is directed by Andrew and Jon Erwin whose faith-based catalog includes movies like 2018's "I Can Only Imagine" and last year's "The Jesus Music." With this film the brothers deliver the rare sports bio-pic that really is about the man more than his accomplishments. That doesn't mean it avoids all of the usual sports movie trappings. There's plenty of melodrama and of course we get the overly dramatic "big game," complete with swelling music and obligatory slow-motion. But at its heart, the movie sticks to the personal side of Kurt Warner's story which proves to be the right move.

This is one of those movies that's hard for me to dislike even with its noticeable flaws. I'm a sucker for true underdog stories and Warner's is undoubtedly one of the most amazing in sports history. Here he's played by the effortlessly likable Zachary Levi ("Shazam") who may be a tad too old for the film's early scenes, but who quickly sinks into his role. He gives an earnest and committed performance that highlights Warner's character yet doesn't shy away from his shortcomings.

By focusing more on Warner's personal journey, screenwriters Jon Erwin, David Aaron Cohen and Jon Gunn hand Levi a surprisingly meaty role. While football certainly has its part in the story, the movie is really about overcoming impossible odds to succeed. More than that, it's about grasping what's truly important in life. We learn that for much of Kurt Warner's life, football was most important. But it takes losing his dream and meeting his future wife Brenda Meoni (played with a striking mix of strength and vulnerability by Oscar-winner Anna Paquin) to finally open his eyes to what matters most.

The film's early scenes touch on Warner's time as a fifth-year senior quarterback for Northern Iowa. After sitting on the bench for four years, Kurt is finally named the team's starter. Soon he's cutting his own "highlight" reels to send out to pro scouts. But an unknown quarterback with only one year of college experience at a small Division I school automatically sets him up as an underdog.

It's during this time that he first meets Brenda, a divorced single mother raising two kids, one being her legally blind son Zack (Hayden Zaller), an underdog in his own right. Despite there being a clear spark between them, Brenda fears a repeat of her painful first marriage, and is quick to push Kurt away. But the movie's inescapable predictability kicks in (the first of several times) and the two eventually become a couple.

While none of the film's major plot points will surprise you, it's what happens in between them that gives the movie its heartbeat. Football takes a backseat to Kurt and Brenda's struggles. We see them buying groceries with food stamps and scrapping together loose change just to put gas in the tank. They're hit with tragedy and hardship leading Kurt to finally swallow his pride and accept a job playing quarterback for the Iowa Barnstormers, a new team in the fledgling Arena Football League. At one time Kurt smugly looked down on the Arena League with its wild play style and raucous crowds. But not only does it help pay the bills, it finally opens the door to his dream of playing in the NFL.

Interestingly, the last 20 minutes are all we get of Warner's NFL career. We see him get the call to St. Louis where he faces the ire of offensive coordinator Mike Martz (Chance Kelly). "You're too old to be a rookie. You're too green to be a pro," Martz barks. But Kurt has one powerful ally -- a gravelly voiced Dennis Quaid playing Rams head football coach Dick Vermeil, yet another fellow underdog who believes Kurt is ready for his shot.

Strangely, "American Underdog" downplays the spiritual side of Kurt Warner's journey, something he himself has been very vocal about. It's definitely woven throughout the movie, but there seems to be a concerted effort to be as subtle with it as possible. Perhaps it's to avoid the schism that often comes with "faith-based" movies. At least it's there and it helps give a well-rounded and honest portrayal of the man beyond the touchdowns and accolades. A man with a truly inspiring story worth being told.