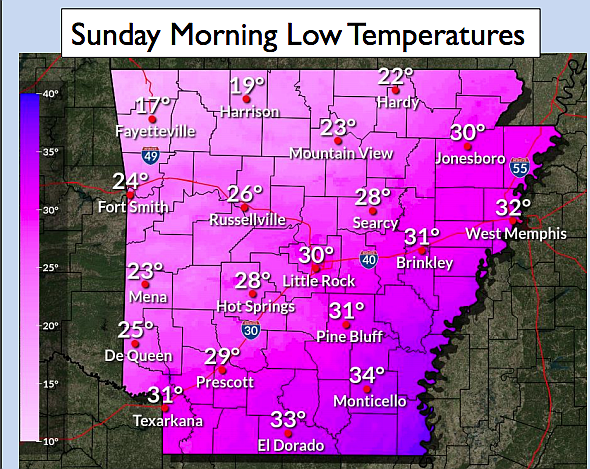 There is some potential for snow across the state Sunday, according to the National Weather Service.

A few rounds of thunderstorms will be possible in the next few days with the potential for severe weather on Wednesday and Friday into Sunday night, according to a Tuesday morning briefing from the weather service.

Above average temperatures and moisture will fuel thunderstorms, as a cold front and upper level storm system approach the state, the briefing states. The front is expected to move across the state Saturday into Saturday night, when significantly colder air will move in, forecasters say.

The low temperatures for Sunday morning will be in the high 20s to low 30s, according to a forecast map from the weather service. North Arkansas will see temperatures in the high teens to low 20s.

Those conditions include hail up to the size of a quarter, up to 60 mile per hour winds and low tornado potential, according to forecasters.