For coaches, team not playing is a cop out 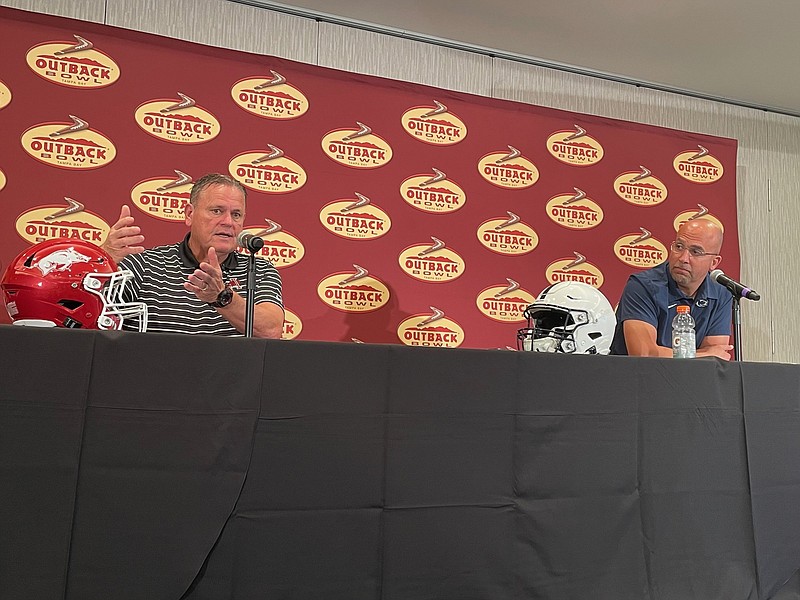 Arkansas Coach Sam Pittman (left) speaks during a news conference Wednesday in Tampa, Fla., as Penn State Coach James Franklin listens. The No. 21 Razorbacks meet Penn State for the first time Saturday in the Outback Bowl as they look to win nine games for the first time since the 2011 season. (Arkansas Democrat-Gazette/Tom Murphy)

TAMPA, Fla. -- Sam Pittman made the only comment about covid-19 when he and James Franklin met for the final press conference before Saturday's Outback Bowl.

The Razorbacks are doing everything they possibly can to stay away from it.

No doubt Franklin and the Nittany Lions are, too. Florida is a hotbed for the virus.

The virus has been with us almost two years, and yet, we are entering 2022 with the same old problems in sports that were there from the start.

Games, from junior high to the professional leagues, are being canceled or postponed coast to coast.

It is like some people don't understand, as long as covid lives, there will be new strains, however, it is definitely not the only thing affecting bowl season.

Opt-outs are the hot subject. UCLA and Texas A&M are the biggest names who opted out of a bowl game, citing illness and opt-outs.

As Power 5 programs, that just seems like a weak excuse not to play.

Penn State has had six starters opt out for the NFL, but the Nittany Lions are here with their 114 other players and planning to burn redshirt seasons if necessary to play.

Arkansas lost two of its best players, one on offense and one on defense, and the Razorbacks are here and gung-ho to play Saturday.

At that final press conference, Pittman and Franklin were asked if it crossed their minds to not play. Both were careful not to point fingers at those who, by not playing, basically told the remaining players they just weren't good enough to win.

They sure didn't show any animosity for the players who made a career decision.

"We thought we were done with it. It's happening again this year. I don't really want to get into it because I can't really speak for other people, what they are doing.

Pittman: "I think it says a lot about Penn State's Coach Franklin. He's had several guys. If you look at it, if we played in the regular season, the teams would be different. I mean, they're just different because we've had a couple leaving for the NFL.

"Once you wrap your mind around that the teams are different, you're going to field a different football team, you're probably going to find some surprises both ways from who's out there.

There is a deep, intense rivalry between the Big Ten and the SEC. No doubt the last dozen or so years the SEC has been the most powerful football conference, but Saturday will be yet another showdown for bragging rights.

Until game time though, two coaches came together privately at the bowl and had an open dialogue about what is going on in college sports.

The last two years have been tough for everyone, and there doesn't seem to be much more coaches and administrators can do about covid.

As for teams opting out of bowls when they still have more than 100 players, that has to be fixed sooner than later.