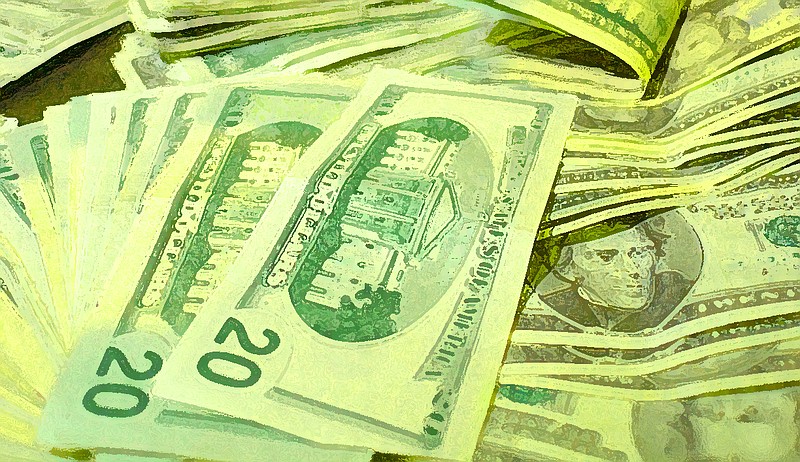 Fueled by rising individual income tax collections, Arkansas' general revenue collections in January increased by $68.3 million, or 10.4%, over the same month a year ago to $722 million.

The state Department of Finance and Administration reported the figures in its monthly revenue report released Tuesday morning.

The state's total general revenue collections in January are a new high for the month, beating the previous high of $653.7 million collected in January 2020, said Whitney McLaughlin, a tax analyst for the finance department.

Individual income tax and sales and use tax collections are state government's two largest sources of general revenue. General revenue helps pay for state-supported programs such as the public schools, colleges and universities, the state's Medicaid program, prisons and the Arkansas State Police.

Gov. Asa Hutchinson said the monthly revenue report continues to be good news, with revenue exceeding the forecast in both income tax and sales tax collections.

"We are now 7 months into the fiscal year and our surplus over forecast is over $400 million," the Republican governor said Tuesday in a written statement. "This means people are returning to work and showing confidence in the economy. I expect our economy to be robust in the coming months as well."

January is the seventh month of fiscal 2021, which ends June 30.

During the first seven months of fiscal 2021, net revenue increased by $298.7 million, or 8.4%, over the net revenue in the same period in fiscal 2020, to $3.85 billion. That exceeded the state's April 2 forecast by $421.8 million, or 12.3%. That's a record amount to exceed the forecast after seven months of any fiscal year, according to department spokesman Scott Hardin.

The finance department noted that these results include net collection increases from the state shifting its individual income tax filing and payment deadline from April 15 in fiscal 2020 to July 15 in fiscal 2021 to coincide with the federal government shifting its deadline in response to the economic turmoil of the coronavirus pandemic.

On April 2, the finance department cut its net general revenue forecast for fiscal 2021 by $205.9 million, to $5.68 billion, citing a projected recession triggered by the pandemic.

In its fiscal session in April, the Arkansas General Assembly enacted a $5.89 billion general revenue budget for fiscal 2021. The April 2 forecast will provide $5.68 billion in general revenue for that budget, leaving $212.2 million of that budget unfunded.

Sen. Jonathan Dismang, R-Searcy, said Tuesday that he views the matter of net general revenue beating the forecast by $421.8 million so far in fiscal 2021 as largely one-time money, spurred by activity stimulated by federal coronavirus payments, unemployment benefits and loans. He said it "should not be anything we rely on for budgeting purposes."

"Hopefully, that helps us get through the situation that we are in, but I would anticipate some of that getting eaten up before we actually close out the fiscal year," said Dismang, who is a co-chairman of the Joint Budget Committee.

In November, Hutchinson proposed a $5.84 billion general revenue budget for fiscal 2022, a $161 million increase over the current funded budget. Fiscal 2022 begins July 1. Most of the increased general revenue would go to human services, public schools and the colleges and universities.

The General Assembly will set that budget during its regular session, which started Jan. 11.

The governor has proposed the General Assembly approve $50 million a year in income tax cuts for moderate- and low-income Arkansans and reduce the top rate from 5.9% to 4.9% for new residents for five years, with the eventual aim of reducing the top rate for everybody else to 4.9% over a five-year period. State officials project cutting the top rate to 4.9% would reduce state general revenue by $275.6 million a year when fully implemented.

According to the finance department, January's general revenue included:

Collections from estimated payments increased by $24.4 million from a year ago to $110.8 million, outdistancing the forecast by $43.1 million.

Collections from returns and extensions slipped by $300,000 from a year ago to $9.5 million, exceeding the forecast by $1.8 million.

• A $12.6 million, or 5.6%, increase in sales and use tax collections over the same month a year ago to $236.9 million. That beat the forecast by $16.5 million, or 7.5%. Sales tax collections in January are largely based on purchases made in December for which taxes were remitted to the state in January.

• A $12.4 million, or 32.3%, increase in corporate income tax collections over the same month a year ago to $51 million, outdistancing the forecast by $23 million, or 82.3%. That was due largely to increased estimated payments last month, which "means our large firms are doing well," Shelnutt said.