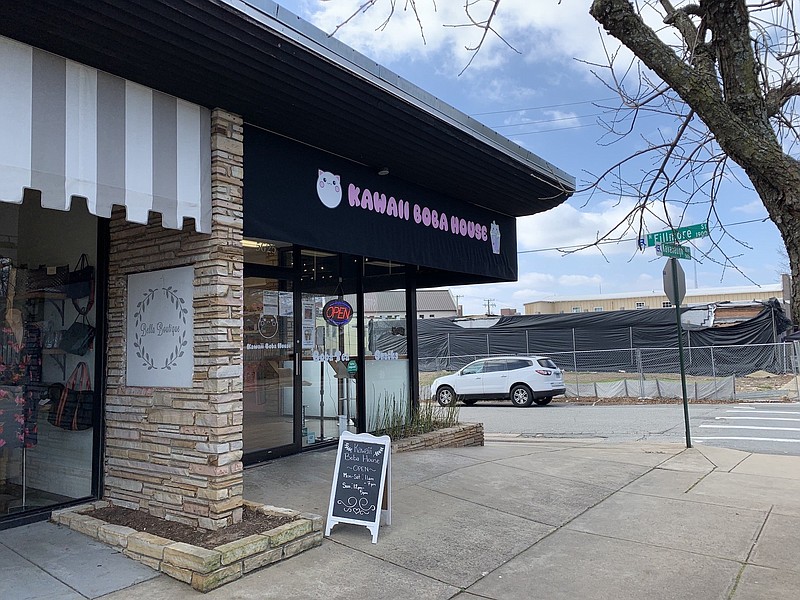 If you need evidence that we don't get out as much during the pandemic, we missed the December opening of Kawaii Boba House at 5625 Kavanaugh Blvd. (corner of Kavanaugh and Fillmore Street), in Little Rock's Pulaski Heights, formerly The Cupcake Factory and Cupcakes on Kavanaugh. Offerings include milk tea and fruit tea flavors with an array of boba additions (starting with classic tapioca and getting increasingly exotic from there), plus eight specialty drinks and a couple of food items (bao — Asian filled buns — and an Asian ice cream sandwich, plus some grab-and-go packaged pastries). Hours are 11 a.m.-7 p.m. Monday-Saturday, noon-5 p.m. Sunday. The phone number is (501) 615-8888; the website, kawaiibobahouse.square.site, right now only lets you order from the older location at 1310 Prince St., Conway.

Minute Man President and Chief Executive Officer Perry Smith says he has been working on staffing and logistics to speed up service from the Minute Man Mobile after early customers experienced lengthy waits at the food truck's opening a couple of weeks ago on a parking lot at West Fourth Street and Broadway in Little Rock. He says now that for the most part, they're putting out burgers at approximately 2-3 minutes per order. Meanwhile, the better to serve the demand from the many towns that used to have Minute Man outlets, he's working on adding a second mobile unit, which, under the best circumstances, could be on the road within 4-6 weeks.

Smith, who opened the first Minute Man redux in Jacksonville in September, says the original plan, pre-pandemic, was to open three restaurants in fairly short succession, but that after a planned west Little Rock location fell through last year, "we decided that we have to go mobile."

The Farm 2 Table Project, a nonprofit "Community Style Farm" incorporating Hatchling's Chicken Ranch that, according to its Facebook page (facebook.com/Farm2TableProject), provides access to "Healthy Fruits and Vegetables" while helping people experiencing hunger, is working on a restaurant project on its site, 25 Prickly Pear Loop, Holland, to be called The Garden of Eat'n, with a target to open in May or June. Owner Patrick Colb says it'll be a log-cabin-style building with an open kitchen where diners can watch the staff cook "with flame and smoke." The menu will change daily based on what the farm produces, but everything will be freshly harvested; even the meats will be fresh, he says — for example, steaks will be cut to order. They're making their condiments in house; if you're vegetarian, Colb says, you can call ahead and he'll fix your vegetables himself. And rather than having a set price schedule, you can pay on one of three tiers: "pay what you can," "pay it forward" or "volunteer," in kitchen or on farm, with the hours geared toward the value of the meal. Right now, Colb says, they're serving large portions out of a food trailer on the site and are feeding a lot of repeat customers. The project's phone number is (501) 796-1083; the website is hatchlingschickenranch.org.

We lack details, but we're told that James Blackwood, who used to operate Blackwood's Gyros & Grill in Conway, is apparently resurfacing in Morrilton, where his Blackwood's Landing and Tavern is replacing El Penjamo at 102 W. Broadway.

The Fayetteville Flyer is reporting that JJ's Beer Garden and Brewing Co., better known as JBGB, 3615 Steele Blvd., Fayetteville, could be making a comeback. The restaurant/brewery/concert venue/hang out closed in late 2019, but "sister company" JJ's Grill has tweeted that a planned patio expansion project is "still alive" and that "[c]onstruction of our enclosure officially started [in January] with a completion date around early Fall, possibly late summer." The brewery meanwhile has remained in operation.

And MSN Lifestyle lists The Neighborhood Diner, 1112 N. Main St., Harrison, as the best hole-in-the-wall diner in Arkansas in a recent survey (tinyurl.com/y6ongbso), based on "reviews on sites such as Yelp and TripAdvisor as well as rankings by expert food writers." The survey cites customer reviews in reporting that "There's not a whole lot of elbow room at this roadside diner with its red-checkered floor, but there's enough good food to make up for the tight quarters. In keeping with their old-school style, this diner takes only cash or checks, and due to the pandemic seating is outside-only." And it suggests what to order: "Go for some biscuits and gravy with a side of hash browns if you're stopping in for breakfast. Later in the day, down a chili dog or the Frito Pie."