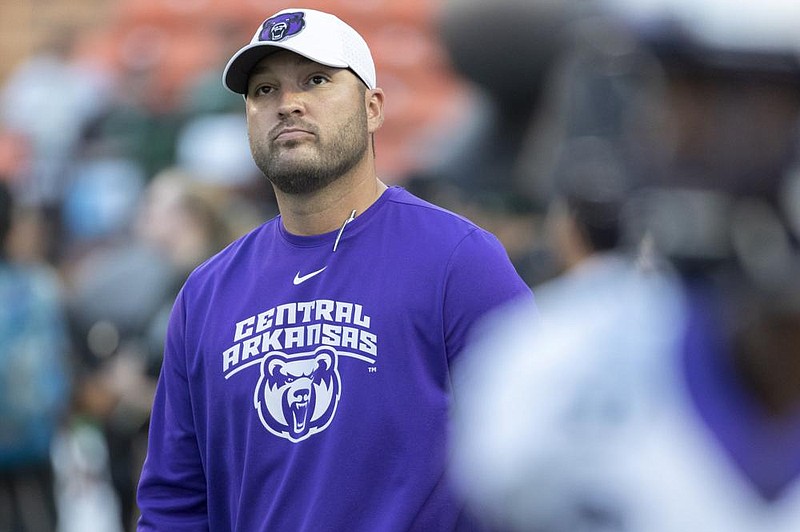 The University of Central Arkansas filled out much of the remainder of its 2021 signing class Wednesday as the regular signing period got underway.

After inking 13 recruits in the early period -- three of whom already have enrolled at UCA in junior college transfer KC Clark, Cabot quarterback Tyler Gee and Darius Hale, a running back out of Pearland, Texas -- Coach Nathan Brown and the Bears announced eight more signees.

Wednesday's additions were highlighted by three in-state signees, including Bryant's Hayden Schrader, a 6-3, 210-pound WR/TE who won three Class 7A state titles with the Hornets. He was a member of the Democrat-Gazette All-Arkansas Preps first team in 2020.

"I really enjoyed the coaching staff, just the way they respected me and showed that they cared," Schrader said. "That was big for me."

Schrader racked up more than 1,400 yards this season for Bryant and totaled 33 touchdowns in his career, epitomizing two of the characteristics Brown emphasized when describing his latest recruiting class: production and winning.

"We talk about culture here constantly," Brown said in a Facebook Live announcement. "You want to get guys from winning programs."

The same can be said of both Texas recruits who put pen to paper Wednesday. Montrell Smith, a 6-4, 220-pound tight end from Carthage, Texas, was a three-time Class 4A state champion at Carthage and was twice a first-team All-District 10 honoree.

Sean Smith, a product of Mansfield Summit High School, will bring speed to the Bears' defensive backfield as they look to replace first-team All-American Robert Rochell. According to Brown, Smith runs a 10.4-second 100-meter dash, and the Class 5A state semifinalist held offers from the likes of Arkansas State University and Missouri State.

UCA has signed eight in-state prospects out of the 21-man class.

It's also notable the Bears signed just one player from Florida after having 12 players from there on last year's roster. In announcing UCA's move to the Atlantic Sun Conference, Brown highlighted the opportunity to expand the Bears' recruiting footprint -- the ASUN includes four Florida-based schools.

Brown acknowledged Wednesday that covid-19 restrictions affected where he and his staff looked to target players in this year's class.

"[Covid] totally changed and flipped our world upside down," he said. "The months of December and January ... we would [normally] be on the road five, six days a week and then we'd be back in Conway on the weekend hosting official visits.

"Geographically, pushing to the ASUN Conference and really recruiting toward that, we've already been pushing more southeast."

Outside of Arkansas, six signees are from Texas, three from Mississippi, two from Alabama, and one each from Tennessee and Florida.

With 21 of UCA's 25 spots filled, Brown said there's a possibility the Bears could either add a few late signees from the high school ranks or perhaps a transfer or two as the regular signing period progresses.