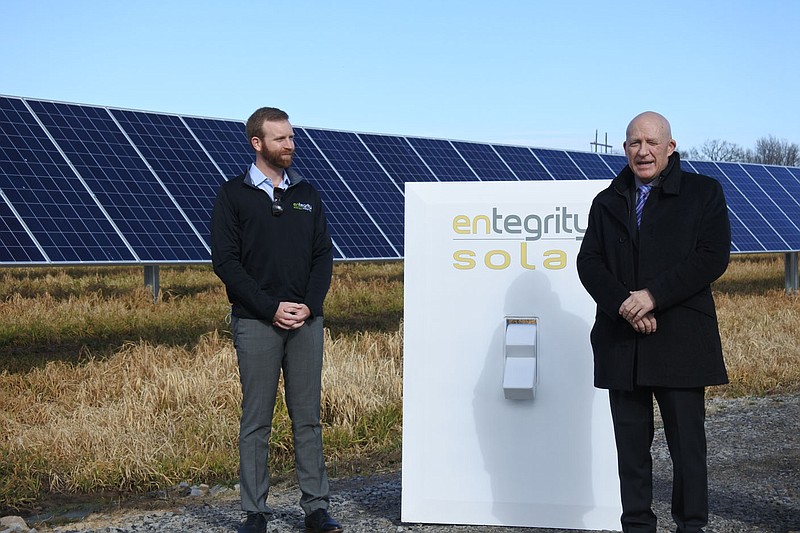 Alma Mayor Jerry Martin, right, speaks while Sam Selig, director of operations for project development at the Little Rock-based company Entegrity, listens during a “Flip the Switch Event” for Alma’s new solar array at its wastewater treatment facility at 2500 Orrick Rd. Friday. This new array comprises the first phase of a 25-year solar services agreement between the city of Alma and Entegrity. (NWA Democrat-Gazette/Thomas Saccente)

ALMA -- The city completed the first part of a project designed to save millions of dollars by using the power of the sun.

The city held a "Flip the Switch" event for its new solar array Friday. The array at 2500 Orrick Road will power the city's wastewater treatment facility, as well as a lift station that the city owns.

"We had a piece of property out there by the wastewater facility that was unused and actually not suitable for a lot of things, but very suitable for this solar array," Mayor Jerry Martin said.

Martin explained that with a smaller water system such as the city's, it's difficult at times to generate sufficient revenue to take care of the infrastructure and other necessities while still making the system affordable to the average user.

The solar array will help the city slow the increases in fees for its water customers, as well as give Alma "a little bit of a cushion" to allow it to do what it needs to do for its water system, he said.

"This is going to be very, very beneficial moving forward to our water customers," Martin said.

Th new array is the first phase of a 25-year solar services agreement between the city and the Little Rock-based Entegrity Energy Partner. The City Council gave Martin permission to sign the agreement in December 2019.

Sam Selig, director of operations for project development at Entegrity, said that through the agreement Alma purchases solar energy produced by the array from Entegrity. Entegrity not only built the facility but owns, operates and maintains it.

The second phase of this project will involve building another solar array that will power the rest of the city's municipal buildings, according to Martin. As with phase one, building this facility will come at no cost to the city.

Martin said the city expects to save more than $2 million over the course of its agreement with Entegrity.

The new array at Alma's wastewater treatment facility is a roughly 500-kilowatt, direct current facility, according to Selig. It's made up of 1,568 panels and will produce about 900,000 kilowatt-hours of energy annually.

Selig said construction for the array started in about October and ended in January, with the project costing Entegrity about $1 million. The array will offset about 80% of the consumption of all ot the city's Arkansas Valley Electric accounts, he said.

Martin said it isn't yet known when construction for phase two will begin.

"We ran into a little bit of an issue with some property where we originally was going to put it, so we've been actively seeking an alternative site, and I believe we are very close to having that in place," Martin said. "We are hoping that that phase will get underway here within the next couple of months."

Selig said the second solar array, an 850-kilowatt direct current facility, will offset the city's Oklahoma Gas and Electric consumption and produce about 1.5 million kilowatt-hours of energy per year.

Selig estimated that both phases of the 1.3-megawatt direct current project will cost Entegrity about $3 million. The project was designed to offset about 80% to 85% of the city government's total electric consumption.