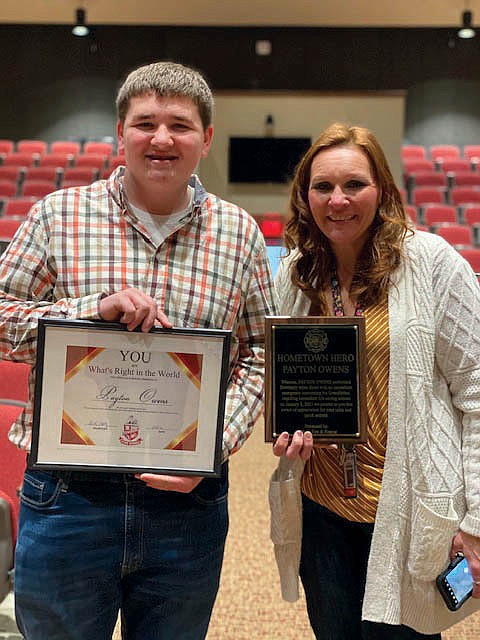 Payton Owens poses for a picture with his mom, Vicki Owens, after he received the “You Are What’s Right in the World” certificate on Jan. 22. The award was given to Payton after he saved his grandpa’s life Jan. 8 by using a homemade tourniquet

HEBER SPRINGS — When Payton Owens, a junior at Heber Springs High School, took a health class last year, he never thought he would actually use that knowledge in a real-life situation, but he discovered that one small lesson can change a person’s life.

On Jan. 8, he and his brother were leaving his house to go to football practice when his mom, Vicki Owens, called.

“She said my grandpa was bleeding out,” Payton said. “So we go down to my grandpa’s house, [which was about 100 yards away], and when we got there, there were big pools of blood in the kitchen, bedroom and bathroom.

“He had an ulcer on his leg that looked like a big pimple, and he is currently on blood-thinner medication,” Payton said. “When he stood up, the ulcer popped, and he started bleeding everywhere.”

Vicki said her dad, Verlon Abram, has chronic venous insufficiency, which is improper functioning of the vein valves in the leg.

Payton said that when he found his grandpa, he was lying unconscious.

“I saw that his leg was oozing blood, so I took a towel and wrapped it around his leg to stop the bleeding,” Payton said.

He said he eventually grabbed a sheet out of the closet and used a wrench to make a homemade tourniquet and cut off the circulation to Abram’s leg. When the paramedics arrived 15 or 20 minutes later, they were impressed and said Payton had saved his grandpa’s life.

“They were blown away,” Vicki said. “They gave Payton lots of praise and were impressed with the job he had done under pressure.”

Payton took the health class in January 2020, soon before the COVID-19 pandemic shut the schools down. The class is taught by Sammie Hudspeth, a nurse at the school, and Dale Cresswell, the head cross-country and track coach.

On Jan. 22, the school held an assembly to honor Payton and his heroics.

“Payton is an amazing young man who showed great composure and maturity in a stressful situation,” Hudspeth said. “His actions are a great reminder that our youth really are paying attention to what we are teaching, even when it’s something they think they will never use.

“We’re grateful to have been a small part of teaching him and thankful that he reminded us that one small lesson really can change — and sometimes save — a life.”

Vicki said she is thankful that the class was taught in-person because she doesn’t think it would have been quite as effective if students had to learn the material virtually. However, if it was a normal school day (pre-COVID-19), Payton wouldn’t have been home to save his grandpa’s life.

“Payton has been a little restless and sleepless, worrying over this little recognition,” Vicki said. “He is very deserving, but it is hard for him to accept it.

“He is on the baseball and football team, and some of his classmates watched the segment on the news with him. We have received very kind support from the community.

“But at 16 years old, this is very unique and different for him right now.”

“I’m not a huge attention seeker,” Payton said. “I like to chill out in the back.”

Abram lost about 30 percent of his blood before his grandson showed up. He is still pretty weak and is at home recovering. Payton said it will take about two weeks for his grandpa to replenish all the blood that he lost.

Vicki, who is a second-grade teacher at Heber Springs Elementary School, said she is so proud of her son.

“When I walked into my dad’s house, it was very graphic, and it just blows me away that [Payton] was able to keep it together and be cool as a cucumber,” she said. “I was very impressed with his demeanor.”

“I watch a lot of murder shows, so I guess I am desensitized to it,” Payton said. “In class, we practiced making tourniquets on dummies, so I was kind of confident that I could help him.

“I knew he was close to death because there was so much blood everywhere. I knew I had to help, because otherwise, he would die. I thought he was dead when I walked in there.

“When I took this class, I never expected to use it. I didn’t know anybody who had ever used a tourniquet except maybe on a show or something. I never thought I would use it.”