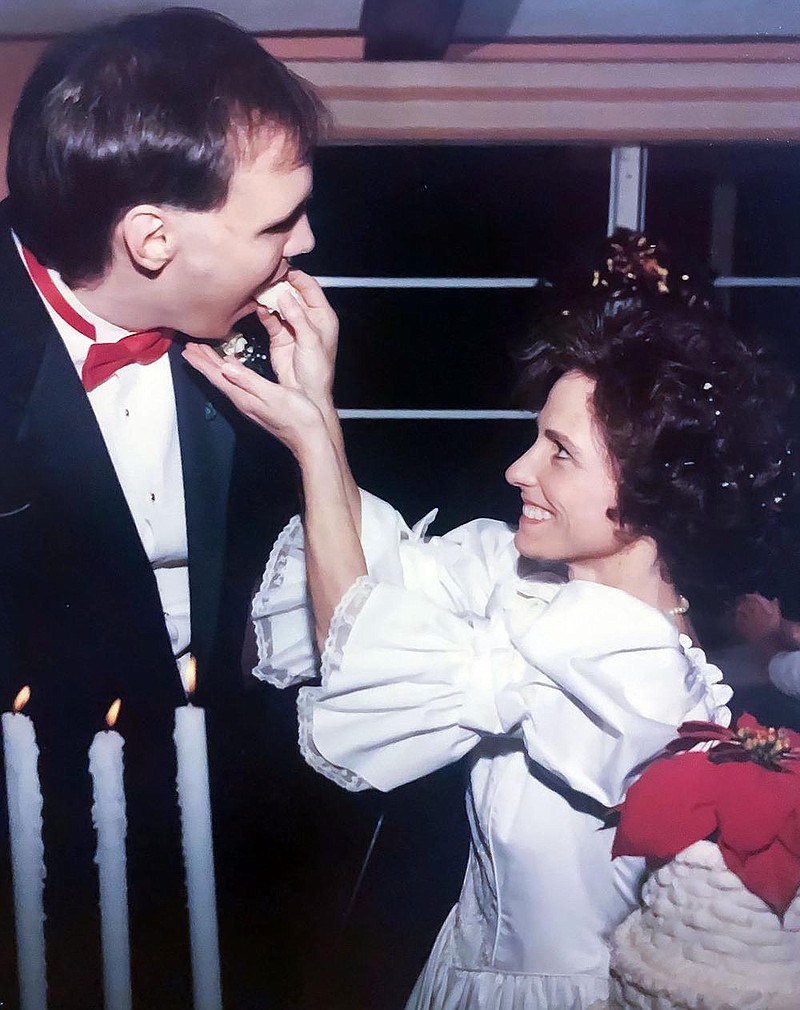 Bob Stobaugh jokes that when Shelia Upton Baxley handed him a defibrillator the first time he saw her, his heart skipped a beat.

Shelia didn't notice Bob then; he had just started working as an orderly at the hospital in Batesville around 1980 and she was a nurse.

"I just remember she was the sweetest thing and asked me to help and I did," Bob says.

When his part in handling the patient emergency was done, he made a beeline to the nurse's desk to ask who she was. But it would be years before they became friends and then started dating.

Almost a decade later, they had become close friends and often went out for dinner with a group.

"I realized there was a spark first when we went to a dance and I remember how safe and comfortable I felt with him as we danced together," Shelia says.

For their first date, they drove the almost two hours from Batesville for dinner and dancing at Cajun's Wharf in Little Rock. That became a frequent destination for them.

Soon after, Shelia invited Bob to join her for a weekend at her parents' home in Guion, a little town in north central Arkansas.

"She wrote out just explicit directions on how to for me to drive because she was already there," he says. "I just remember thinking, 'Oh, my lord, this is complicated,' but I made it."

They hadn't been together long, Shelia says, when her best friend, Pat Collins, noticed that Bob always had his arm around her and that they seemed blissfully happy.

"She said, 'You both make the sweetest couple, you should get married,'" Shelia says.

Shelia and Bob were at Cajuns one night when they decided that was exactly what they should do.

"We were out back. I think this was before they even built the deck," he says. "You could walk around behind and you could kind of see the river. That's when I asked her and she said yes."

He hadn't known going into that night that he was going to propose, so he didn't have an engagement ring to give her yet.

"I had kind of heard through the grapevine what her friend Pat had said and I thought, 'I like that idea, too,'" he says.

They exchanged their vows on Dec. 1, 1990, in First United Methodist Church of Batesville. Their reception was at the Batesville Country Club.

"We had a Christmas wedding so the church was all decorated and filled with poinsettias," Shelia says.

Bob sang to her during the ceremony.

"It's funny because I'm a singer but I don't memorize things well, so I had to hide the words to this song in the greenery around the unity candle," he says.

Bob has sung at many weddings and thus considers himself a wedding cake connoisseur. They chose a woman from the church to make their wedding cake and he insists it was the best he ever had. For the groom's table, Bob's grandmother made an apple sauce stack cake, a family recipe involving 13 layers of sugar cookie and homemade apple butter sauce.

Bob had been in a car wreck a few weeks before he and Shelia were married and had injured his hand, to the point that he couldn't properly hold utensils in the dining room of the ship during their honeymoon cruise to the Bahamas.

"So Shelia, my new bride, was cutting my steak up for me and people looked at us funny, like she was really spoiling me rotten," he says. "I just couldn't use my hand."

Bob had moved to Little Rock by then, so they settled there after the honeymoon and both went to work for Baptist Health.

In the early 1990s, Shelia was diagnosed with cancer.

"For several years she had many surgeries and then it went in remission. We didn't think she would live but with positive attitudes and prayers from friends and family, she is a survivor," says Bob, clinical quality analyst at Baptist Health. "At the time of her diagnosis she was working in the coronary care unit at Baptist Health. Being unable to continue her career in nursing, she now spends her time rocking babies at Second Presbyterian Preschool. People call her the 'Baby Whisperer' since she can calm the most cranky and irritable baby."

They have returned to Guion almost every Christmas Eve to spend the holiday with Shelia's parents.

"That has been a special tradition," he says.

Shelia's mother died in October and Shelia and Bob leaned on each other in grief.

"Shelia said something then about how I was 'her person.' It just made me realize, 'Well, gosh, you're my person, too.' That was just kind of emotional, after 30 years, to hear that," he says. "That's just important. We've been through a lot in the last 30 years and it's just nice to have somebody like her to be 'my person.'"

He says: “I thought she had the most sparkly eyes.”

She says: “He went into the bathroom to change and he didn’t come out. Someone finally went in to check on him and he was having trouble getting dressed because he had hurt his wrist.”

He says: “It was just the most pleasant, wonderful, spiritual day that I think I’ve ever had. Yeah, everything was just absolutely perfect. It might have just been because I was in love but I think it was all just perfect.”

She says: “Don’t go to bed mad at each other. Always tell each other goodbye when you leave in the morning and give each other a kiss.”

He says: “Don’t stop saying ‘I love you,’ to each other when you leave the house and when you go to bed at night.”