Cold, ice to set in across state 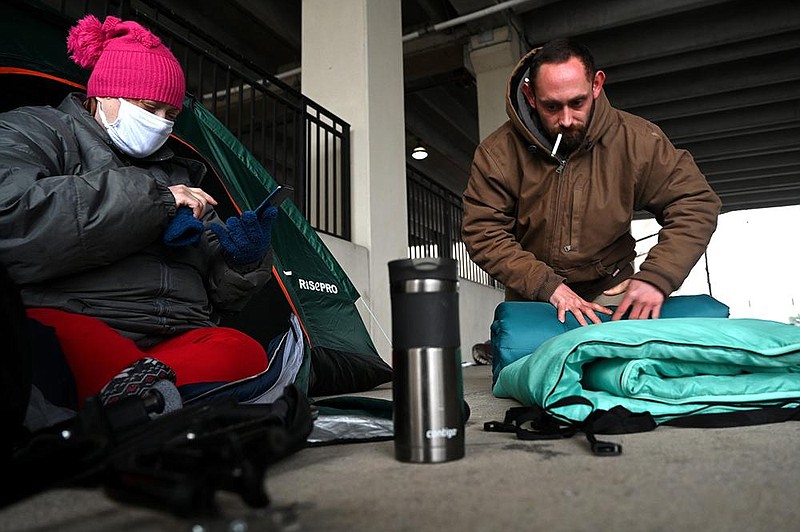 Jenifer Cloud, 37, and her fiancÈ Alax Young, 31, pack up their tent as they prepare to go to the warming shelter for the night on Tuesday, Feb. 9, 2021. (Arkansas Democrat-Gazette/Stephen Swofford)

State and local officials were preparing Tuesday for winter weather that the National Weather Service says could impair roadways, lead to power failures and put the homeless population in jeopardy.

The National Weather Service in North Little Rock has issued an ice-storm warning for northeast Arkansas and a winter-storm watch for central parts of the state. Both are to expire Thursday.

Meteorologist Dylan Cooper said starting late today and into Thursday, freezing rain is expected to glaze a region from Little Rock to the northeastern part of the state with a quarter-inch to a half-inch of ice.

Cooper said Tuesday that it was hard to predict conditions for the capital city, but that areas northeast of Little Rock likley will get a heavier hit. Amounts greater than a half-inch are possible in localized areas.

Dangerous cold also will stretch across the entirety of the state for a prolonged time, Cooper said. Northwest Arkansas could get some of the lowest temperatures Sunday at or below zero. Little Rock could have lows around 13 degrees, and southern portions of the state could dip to 17 degrees.

Ice is expected to affect travel across a significant portion of the state and the prolonged cold will slow melting, Cooper said.

Dave Parker, spokesperson for the state Transportation Department, said districts and every piece of equipment are ready to go, but treatment of the roads could be tricky.

"We are trying to apply the salt brine," Parker said Tuesday. "If it doesn't rain too much we can get it down and let it begin to work. However, if the rain picks up, as it is supposed to tomorrow, it will be difficult to put it down."

Parker said the brine can lower the freeze point on roadways by as much as 18 degrees, making it harder for ice and snow to stick, but if the brine doesn't go down a layer of rock salt won't help the roads.

Other options could include mixing the brine with beet juice or, as a last resort, placing sand on the roads.

"If it moves fast it is going to be a problem and we are going to have some icing conditions," Parker said. "We are doing, from a process standpoint, every single thing we can do."

Parker said motorists should prepare now and if possible plan to stay off the roadways at least through Thursday, but he added that work on the roads might still be needed Friday.

Cooper said there is also a chance of ice accumulating on trees and power lines, which could lead to widespread power failures from Little Rock into the northeast part of Arkansas.

Entergy Arkansas said in a news release Tuesday it is staging crews in strategic spots for quick response, which includes the use of additional resources from outside Arkansas.

Michael Considine, Entergy Arkansas' vice president of customer service, said the company is equipped to repair broken poles and downed lines as soon as it's safe to do so, and will continue the work until power is restored to all of its customers.

Volunteer organizations and officials also rushed Monday and Tuesday to assist the state's homeless population, which was last estimated at 2,717 by the U.S. Department of Housing and Urban Development in 2019.

Pastor William Holloway with the Little Rock Compassion Center said the organization has added 125 beds to its typical 250 that are available nightly. Extra precautions for sanitation also are being taken as a coronavirus measure.

"I know what it feels like to be in colder weather like that," said Holloway, who was once homeless. "People don't realize that you can get frostbitten. If you've been drinking, you may not realize that."

Johnny Ross, 50, wrapped himself in blankets Tuesday afternoon while inside a tent near East Eighth and Main Street in Little Rock. He said he planned to stick out the cold as long as he could, but said the cold Monday night was already making it difficult to sleep.

"It is my choice," he said when asked why he would choose to stick it out instead of going to a shelter.

The Blytheville native said he gave his sleeping bag to another person in need and that he's been living on the streets since October. He said it isn't his first time, as he's battled addiction for years.

"You just have to have hope," Ross said of sleeping on the street in the cold. "Just don't push the panic button."

Because of the pandemic, Little Rock has decided not to open any of its community centers as warming stations as it has in the past, city spokesperson Stephanie Jackson said in an email Monday.

"However, we do know that the city's warming/cooling centers have been significantly underutilized by those needing shelter from the frigid temperatures in the winter and extremely hot weather in the summer," Jackson said.

Jackson said the city has been working since last week to identify additional bed space. In addition to the Compassion Center, Union Rescue Mission has made an additional 40 beds available at Dorcas House for women and Nehemiah House for men. His Throne will add 34 beds.

"The City is helping with [personal protection equipment] and supplies, and Jericho Way and City staff have shared information about the availability of these beds with people experiencing homelessness," Jackson said.

The Little Rock Police Department also has been working with groups, such as Jericho Way, to inform the homeless about the approaching cold weather.

Several tents away from Ross, Jennifer Cloyd rubbed a leg that had been amputated because of her methamphetamine addiction.

The 37-year-old said she planned to stay at the Compassion Center through the cold spell with her fiance, Alax Young. She said volunteer groups had notified them of the approaching weather conditions.

Cloyd and Young have survived on the streets partly with the help of donations from organizations like The Van, she said.

Street Ministry Luke 9:58, another volunteer group in Little Rock, has 300 sleeping bags it is distributing to homeless people who are refusing to go to shelters, organization co-owner Gala Tallent said Tuesday. Another 200 are on the way, she said. The group has been working to transport anyone willing to stay in a shelter.

In Northwest Arkansas, Salvation Army Capt. Joshua Robinett said the organization is taking extra precautions because of the pandemic.

"Our normal capacity is somewhat limited because we've had to format our shelters and space to align with CDC guidelines and recommendations," Robinett said. "Folks will have to wear masks, and we will be screening people for symptoms."

A quarantine area will be set up for testing, he said.

Hotel vouchers also have been secured in case shelters in Washington and Benton counties reach capacity, Robinett said. The shelters are at 219 W. 15th St. in Fayetteville and 3305 SW I St. in Bentonville.