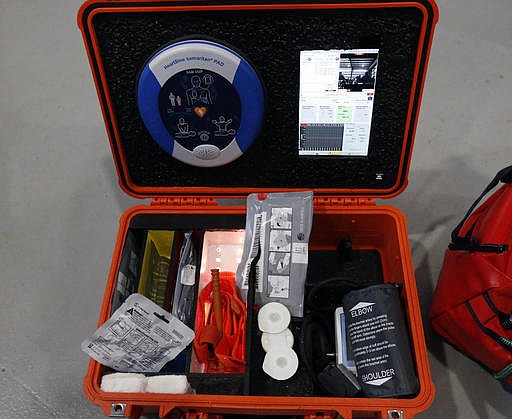 A properly equipped multi-person medical kit is shown during a live telemedicine demonstration at John Bell Williams airport in Bolton, Miss., in this Dec. 6, 2016, file photo.

Legislation aimed at protecting medical providers' "right of conscience" won the approval of the Arkansas Senate on Wednesday over a warning from an opponent that it would clear the way for any medical provider to withhold treatment for most reasons.

The Senate voted 27-6 to send Senate Bill 289 by Sen. Kim Hammer, R-Benton, to the House for further consideration. The bill is called the "Medical Ethics and Diversity Act."

Hammer said the bill is modeled on laws in Illinois and Mississippi.

"What this bill does is it provides a remedy that those medical providers who have a conscientious objection to be put in a situation that they prefer not to, that it provides them a means to defend themselves," he said.

Hammer said he wants to make clear that the bill wouldn't relieve health care providers from their obligation to provide services in emergency situations.

"This just addresses the priority of elective procedures where people have time to make a decision, but it will protect the providers who are being asked to do something against their conscientious determination," Hammer said.

The purpose of the bill is to protect all medical practitioners, health care institutions and health care payers from discrimination, punishment or retaliation as a result of a conscientious medical objection, according to the bill.

They would have a right not to participate in a health care service that violates their consciences, and would not be civilly, criminally or administratively liable for such a decision, under the bill. The right of conscience wouldn't include the right to deny emergency care under federal law governing such treatment.

Religious entities would have the right to make employment, staffing, contracting and admitting privilege decisions consistent with religious beliefs under the bill.

Under the bill, health care payers would be required to file their conscience policies annually with the state Insurance Department.

Sen. Clarke Tucker, D-Little Rock, said he views the bill as allowing any health care provider to refuse to provide any health care service for any reason except for emergency situations. He added that Hammer is probably right that federal law covers, among other things, race and national origin.

The bill would allow medical care providers to refuse to provide treatment to a patient, diagnose that patient's condition or refer patients based on their conscientious objection, he said.

Tucker said conscience would be defined in the bill as including any religious, moral, ethical or philosophical belief and "that pretty much covers everything under the sun."

Hammer said the bill was vetted by the Alliance Defending Freedom's attorneys, who "are not fly-by-night attorneys."

"This law stands in two other states," he said. "If the concerns that have been expressed here today in opposition to this bill have risen to the level that they have been presented, why have there not been multiple lawsuits in a liberal state like Illinois or a conservative state like Mississippi, which represent both of the extremes of the spectrum?"

Similar legislation was filed in Arkansas in 2017 and 2019, but neither bill made it out of committee. Opponents said it would give wide berth to medical providers to use religious, moral or philosophical beliefs to deny care to lesbian, gay, bisexual and transgender patients.

The bill "is a blatantly discriminatory attempt to strip LGBTQ people of basic rights," Eric Reece, the Arkansas manager for the Human Rights Campaign, said in a statement. "Health care should be available to all who need it, not withheld by providers because of hate and fear."

Reece said the bill could be used to allow pharmacists to deny fertility drugs to lesbians or for a doctor to deny hormone treatment for a transgender person needing inpatient care for an infection.