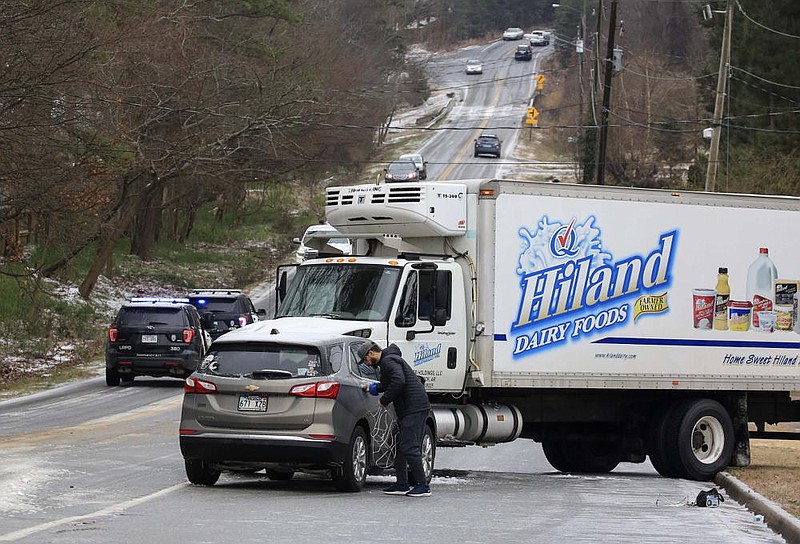 A motorist puts cables on his tires Thursday on a treacherous stretch of Bowman Road in Little Rock. Most roadways in the state were passable since the state got more sleet and snow overnight than freezing rain. More photos at arkansasonline.com/212weather/. (Arkansas Democrat-Gazette/Staton Breidenthal)

A thin layer of sleet, snow and freezing rain coated much of Arkansas on Thursday, but it was nothing compared with what's around the corner.

"It looks like we're going to get our first winter storm as early as Sunday evening, then really kind of ramping up Sunday night into Monday morning," said Dylan Cooper, a meteorologist with the National Weather Service in North Little Rock. "We are looking at the potential of up to several inches of snow. This could be the biggest snow we've had in several years."

"It looks like the entire state is going to pick up some snow," he said.

By Tuesday, temperatures will plummet into the teens and even single digits across the state, Cooper said.

Northwest Arkansas is likely be the coldest, with its low temperature bottoming out around zero degrees Tuesday, he said. In Fayetteville, with the wind-chill factor, it will feel more like minus-10 to minus-15 degrees.

"We're going to have all of winter all at one time," said Cooper.

[Video not showing up above? Click here to watch » https://www.youtube.com/watch?v=lGBiSlqZqdQ]

But until Sunday, Arkansans can bask in high temperatures in the 30s, according to forecasts. That will help melt anything left over from Thursday's front.

On Thursday, a band of sleet and freezing rain stretched from West Texas to the Atlantic Ocean, covering the southern two-thirds of Arkansas.

Near Fort Worth, six people died in a pileup of about 100 cars on an icy Interstate 35, according to The Associated Press. And in Pennsylvania, an airplane with 77 people on board slid off a taxiway before takeoff at Pittsburgh International Airport, but no injuries were reported.

Dave Parker, a spokesman for the state Department of Transportation, said salt brine was applied to highways as a pre-treatment, and Thursday workers were adding mostly rock salt. But if the temperature drops into the teens, water could still freeze on the roads, he said.

Some welcomed the sleet.

Marvin Day, the county judge in Craighead County, said he was happy to wake up Thursday to sleet instead of freezing rain.

"The roads really were in great shape at 5 this morning," he said. "The sleet was so frozen it would make you think it [was] almost like an aggregate. It was a little slicker by mid-morning."

Day said he was concerned the melted areas would refreeze Thursday night.

"When the sun goes down, we're concerned that it will be a mess," he said.

"The main threat right now is that overnight temperatures will refreeze the water," he said.

Noting that Helena-West Helena has many trees and historic homes, "We're a little worried about trees falling on power lines and houses," Smith said.

There were some ice-related accidents in Arkansas on Thursday.

A tractor-trailer rig snagged a sagging ice-covered power line hanging over Interstate 55 south of Blytheville. The truck broke two utility poles, closing both lanes of the highway for a while Thursday morning, according to Entergy.

The utility said the accident caused an outage for 482 customers, a fraction of those without power at some point Thursday.

"The sleet and freezing rain that interrupted service to nearly 5,000 Entergy Arkansas customers over the last 24 hours had mostly passed through the state by Thursday afternoon," Brandi Hinkle, an Entergy spokeswoman, said in a news release late Thursday. "Crews were working to restore power to approximately 840 customers that remained without electricity, and those customers were expected to be restored by 10 p.m."

The hardest-hit areas were in and around Helena-West Helena, Hazen, Blytheville, Wilson, Harrisburg and Brinkley.

Smith said Entergy reacted quickly to restore electricity to a pumping station that supplies water to Helena Regional Hospital and a nursing home.

"Thank God Entergy showed up in time, like the cavalry," the mayor said.

Electric Cooperatives of Arkansas also had outages throughout the state, with C&L Electric in Star City the hardest-hit. Overall, the southeastern counties served by the co-ops had about 2,800 outages by early afternoon. Lincoln County was reporting the most, with 1,500 customers without power.

"The current outages are due to limbs on the power lines that have caused the line fuses and breaks to cease the flow of electricity as they are designed to do," Rob Roedel, a spokesman for the Electric Cooperatives of Arkansas, said via email. "There are minimal areas with downed power lines, however no broken structures have been reported."

Many government offices across the state were closed because of the weather, and many schools shifted to remote learning for the day.

The General Assembly decided to take the day off. Gov. Asa Hutchinson closed state office buildings except for critical operations in the Little Rock metro area.

In Pulaski County, many people were working from home similar to the way they did when more stringent covid-19 restrictions were in place, said Cozetta Jones, a spokeswoman for the county government.

"We are already set up and we've been set up going on 11 months now," Jones said. "The treasurer's office, the assessor's office, are totally able to work remotely."

Jones said nearly all of the county's services are accessible online with the possible exception of court hearings.

Shelters in Northwest Arkansas, Little Rock and Jonesboro were offering warm places for people to stay for the duration of the frigid weather.

Pastor William Holloway said 200 to 225 people stayed at Little Rock Compassion Center on Wednesday night. He said that is about a 20 to 25 percent increase in the shelter's typical population.

"It is cold and they are wet," Holloway said. "They need to be in places where it is dry and warm. Most are just happy to be inside."

Holloway created extra beds in anticipation of the storm, and the center can hold up to 300 if needed. However, he said it is unlikely the center will see the population increase much even as temperatures are expected to drop further.

"Wherever people are at, they are going to stay hunkered down now," he said.

The shelter has maintained covid-19 practices such as social distancing and the use of masks.

Day, the Craighead County judge, said he's not sure what to think about predictions that east Arkansas could get 7 inches of snow. 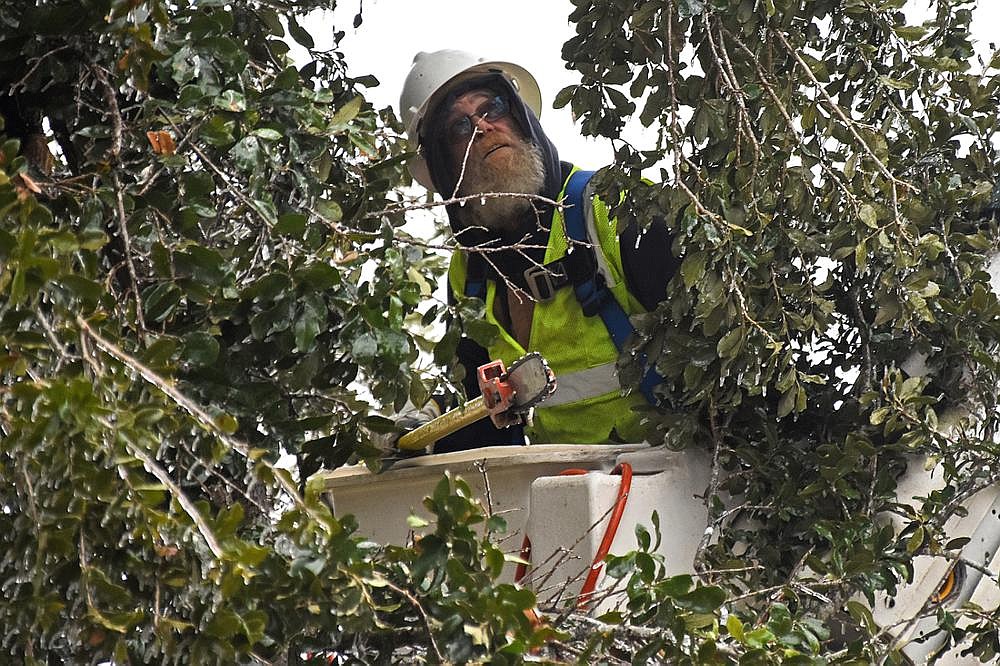 Rick Ingram, a foreman for West Tree Services, works amid the ice Thursday as he trims branches around a power line in Jefferson County. More photos at arkansasonline.com/212weather/. (Arkansas Democrat-Gazette/Staci Vandagriff) 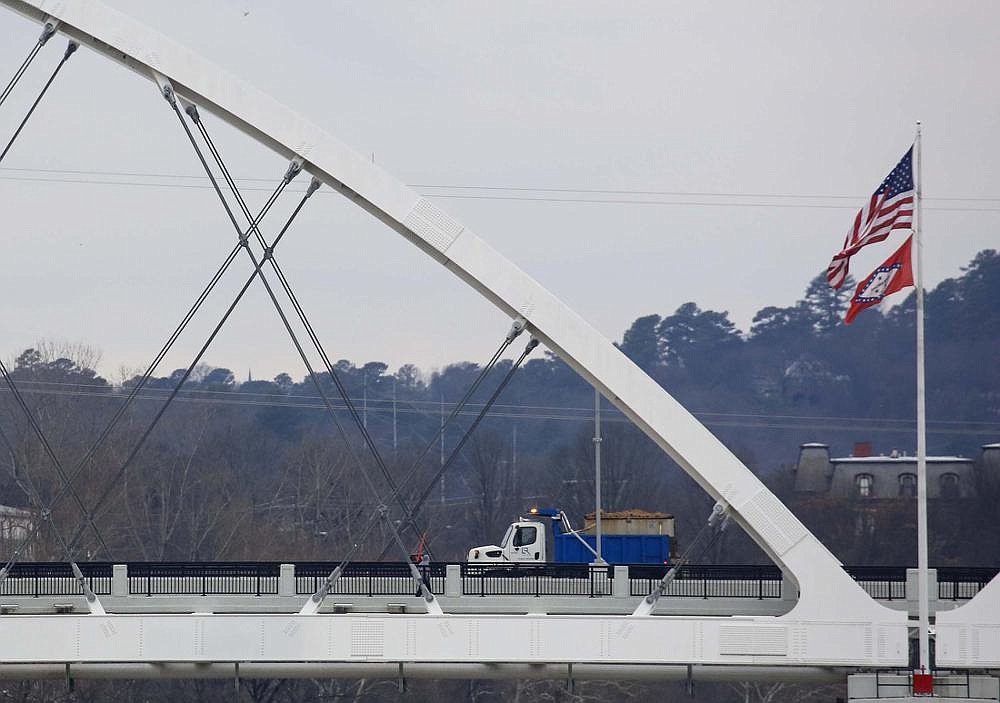 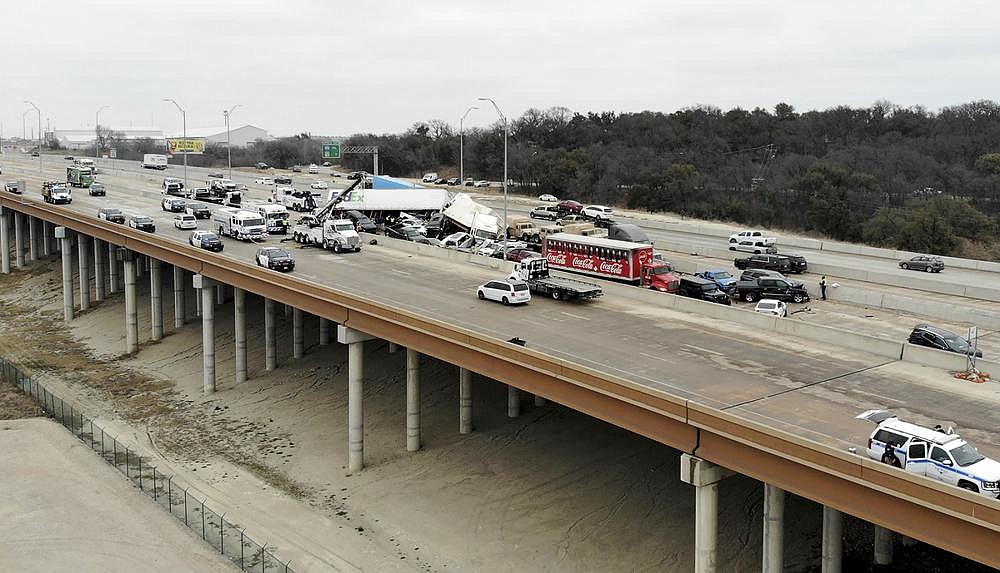 Emergency crews respond to a pileup of about 100 cars Thursday on icy Interstate 35 in Fort Worth. Police said at least six people were killed. At the airport in Pittsburgh, a jetliner with 77 people aboard slid off an icy runway, but no injuries were reported. More photos at arkansasonline.com/212usice/. (AP/Star-Telegram/Amanda McCoy)
ADVERTISEMENT