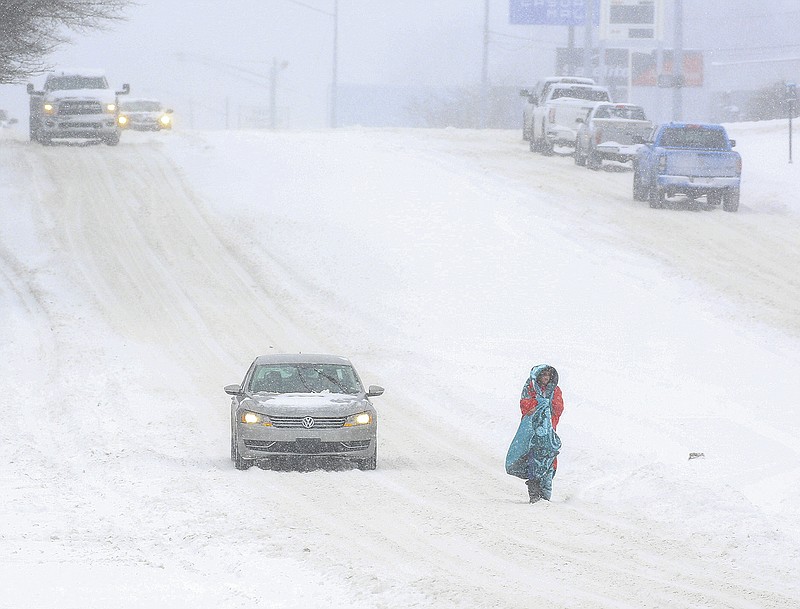 Power companies struggled to keep up with demand, hospitals treated hypothermia patients and tow services were delayed by hours Monday as temperatures dropped and a winter storm blanketed Arkansas with anywhere from 4 to 11 inches of snow.

Among the highest snowfall totals Monday were 11 inches in Vilonia and Greers Ferry, 10.9 inches in North Little Rock and 10 inches in Conway. More is on the way, with another weather system moving into the state this evening that could bring as much as another 6 to 10 inches of snowfall across most of the state.

"This will be on top of the snow that is already on the ground," said Thomas Jones, a meteorologist with the National Weather Service in North Little Rock. "It is going to be so cold there is going to be minimal melting between storms."

"The last time that I can personally think of that we had temperatures below zero was back in the 1990s," Jones said.

Monday's winter storm closed state government, and the Arkansas House said in a news release Monday evening that the General Assembly will be in recess until next Monday.

Little Rock officials said in a news release Monday that city offices will be closed today and public meetings have been canceled through Wednesday.

Garland County Judge Darryl Mahoney said it may be several days before county offices and services are restored to full service.

"I'm not real hopeful about having full services until maybe Friday or next week," Mahoney said. "We'll wait and see this afternoon what kind of progress gets made on our roadways and see if we can open any of the offices at all [today]."

Snow shut down most of Hot Springs' city offices Monday, with services limited to police, fire and utilities. Roadways weren't heavily trafficked, but several motorists were stranded on Central and Grand avenues and Higdon Ferry Road, according to the Hot Springs Police Department.

Roads in Texarkana were extremely treacherous as well. Police dealt with several cars that slid off the roads early Monday and were asking people to not drive unless it was an emergency.

Sgt. David Stout with the Jonesboro Police Department said they'd had a few accidents Monday, mostly people "dropping off into ditches because they couldn't see them." With snow blanketing the ground, it was hard to tell where the edge of the road was.

"We've had a lot of luck today over here because it's all powdery snow," Stout said. "It's not a big, wet snow. Mainly here we've just been dealing with the cold weather. "

Power companies across much of the state struggled to keep up with demand Monday, with some using planned outages in an effort to conserve energy.

Entergy Arkansas reported 3,000 power outages in the state as of early afternoon and asked customers to reduce their electricity usage between 5 and 9 p.m. Monday, saying in a news release that the load forecast was approaching an all-time peak.

"Most of the outages are from usage," spokeswoman Brandi Hinkle said. "There is an unprecedented demand on energy right now."

Midcontinent Independent System Operator, the regional regulator for most of Arkansas, said freezing temperatures and high energy demand pushed utilities in the South and Midwest to their limits Monday.

"We fully committed every available operating asset before the event to lessen the impact on our system, but conditions eventually deteriorated to a point where demand exceeded supply," Executive Director Renuka Chatterjee said in a news release. "The accelerated change in conditions led us to our last resort in order to maintain grid reliability, and we are in direct communication with our members to support their restoration efforts in the affected areas."

"It doesn't mean we will stay there," said Mike Ross, a senior vice president with Southwest Power Pool. "As you know, record-low temperatures, record-high demand for energy, and inadequate gas supplies are some of the reasons that not only us but other grid operators across the country are facing this unprecedented challenge."

Rob Roedel, spokesman for the Arkansas Electric Cooperative, said co-ops around the state were struggling with similar issues.

"We've got an inability to get natural gas to our natural gas power plants due to high demand, and that gas that we're getting is extremely high-priced," Roedel said. "Natural gas is a commodity that is traded, of course, and we've begun to shutter coal-based plants, putting more demand on natural gas."

Roedel said cooperatives have worked with industrial customers who are large users to curtail usage. He said reduction at the industrial level will help reduce the risk of power outages at the residential level.

Dave Parker, a spokesman for the Arkansas Department of Transportation, said temperatures Monday were too cold for rock salt and brine to work well on roadways, so workers concentrated on plowing the snow from interstates and state highways.

But for a while Monday morning it was snowing too hard to clear highways in central Arkansas.

"By the time the plow would make its turn for another swing, the lane it just plowed was snow-covered," Parker said.

Forecasts that call for clearing skies and temperatures in the 20s today in parts of Arkansas will offer a better opportunity to apply rock salt and brine, in addition to plowing, before the next wave of winter precipitation arrives tonight and Wednesday.

Hospitals were seeing some patients suffering from frostbite and hypothermia Monday because of the extreme cold, as well as an increase in emergency room visits brought on by falls on slippery surfaces outside.

"We have seen an increase in orthopedic cases as you might expect," said Dr. Roddy Lochala, chief medical officer for Unity Health, which has hospitals in Searcy and Newport. "With the unprecedented weather, we are concerned about our elderly neighbors."

"The temperatures outside are dangerous," Lochala said. "Any loss of power could be catastrophic."

Like other hospitals across the state, Unity Health has employees staying in its hospitals to ensure there are no staffing shortages because of hazardous travel conditions. It closed its outpatient clinics Monday, while an urgent care clinic and emergency departments remained open, Lochala said.

"Our staffing is OK right now because of pre-planning," he said.

"The people who are most susceptible [to hypothermia] are the most vulnerable, which are those with comorbidities and those who do not have access to proper conditions," Pahls said.

He added that people should seek medical attention if they begin experiencing "severe shivers, lack of coordination, muscle aches or mental confusion."

About 100 University of Arkansas for Medical Sciences employees spent the night on campus or in nearby hotels Sunday night, spokesperson Leslie Taylor said.

UAMS set up cots in conference rooms and offices for those staying on campus. It also opened its fitness center showers for nurses, doctors and support staff to use and ordered additional food in case delivery trucks were not operating Monday.

"We are being told by our primary vendor that it may be Friday before they are able to deliver more food to us," Taylor said in an email, adding that UAMS has reached out to additional food providers and that deliveries are scheduled for today.

Covid-19 patient numbers have decreased, with 40 in the hospital and 12 in the intensive care unit Monday, Taylor said. UAMS closed its public vaccination clinic Monday and today as well as its drive-thru testing center on the campus.

"The one thing that does happen is an ambulance trip that might normally take an hour now is taking upwards of two hours," Swanson said.

Yancy Price, general manager of Phillips Brothers Towing in North Little Rock, said the company was backed up for at least three or four hours Monday. He said things had been nonstop from about 10 a.m. to 3 p.m., and customers were being advised to call another towing service for assistance.

Price said drivers were going into ditches or attempting to go up hills in two-wheel-drive vehicles and expecting a tow to get up the hill.

"We tell them, 'If your light car is too heavy for that, our heavy truck's going to slide down there, too,'" Price said. "So there's just not a lot we can do."

Jonathan Matson, operations manager of North Little Rock-based Arrow Plumbing, said the company did not put trucks on the road Monday because of the dangerous conditions.

He estimated the company had received approximately 150 calls Monday about frozen pipes, plus about another 50 to 75 calls Sunday, but because Arrow Plumbing does not have a dethawing machine, it couldn't help.

"Even if we could get our trucks out on the road, with frozen pipes, you know, there's not a lot you can do without a dethawing machine," Matson said.

He said the company was hoping to be able to send trucks back out on the road this morning.

Numerous flights were canceled Monday out of the airports in Little Rock and Northwest Arkansas.

As of Monday afternoon, approximately 10 inbound flights had been canceled and two or three others had been delayed at Northwest Arkansas National Airport, said spokeswoman Alex English. Approximately six scheduled departures from the airport were canceled Monday.

Deicing aircraft was a major challenge because of the constant snow, English said.

At Little Rock's Bill and Hillary Clinton National Airport, 33 flights had been cancelled by late afternoon Monday, spokesman Shane Carter said. Two flights arrived in the afternoon, and a few arriving and departing flights were still scheduled through Monday evening.

Zack Triplett, the store leader at Kroger's location on East Roosevelt Road in Little Rock, said that in light of customers trying to do last-minute grocery shopping, "it's been fun, but crazy at the same time."

The store was very busy Sunday, he said, but only a handful of people could be seen in the store Monday afternoon. There were no plans to close the store early, Triplett said.

Common items people were trying to buy included bread, milk, water and eggs. "Those are the basics," he said.

Triplett said employees were stocking goods as they arrived.

"As fast as we're putting it out, they're taking it," he said.

People also took the opportunity to go sledding -- or at least to buy a sled and wait for it to warm up a few degrees.

River Rice, a salesman at Gene Lockwood's, an outdoor store in Little Rock, said they sold out of more than 500 sleds in two hours Friday morning.

Raymond Rowland of Modern Kreations Custom Woodworking in Jonesboro, posted Friday on Facebook that he was going to make some wooden sleds. He received hundreds of orders from people as far away as Memphis and Missouri.

"It was overwhelming," he said.

With help from some friends, Rowland made about 300 sleds over the weekend. He finally stopped taking orders late Sunday.

"The messages are still coming in today," he said Monday. "If I was able to build another 300, they would get sold, but we are just so tired."

"We got to see some kids in the shop," he said. "One little boy just bear-hugged the sled as he walked out with it."

Information for this article was contributed by Lara Farrar, Joe Flaherty, Neal Earley and Brianna Kwasnik of the Arkansas Democrat-Gazette; David Showers of The Sentinel-Record in Hot Springs; and Lori Dunn of the Texarkana Gazette.