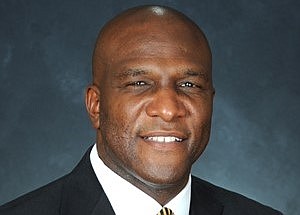 The coronavirus changed the landscape of college athletics in the past year, and it also altered how athletes, coaches and administrators interact with one another.

That alteration led to Chris Peterson's retirement as athletic director at the University of Arkansas at Pine Bluff.

Robinson, a former UAPB quarterback, began his duties as interim athletic director Tuesday. The 49-year-old was executive senior associate athletic director since January 2020, when Peterson was hired at UAPB.

Peterson said Robinson sold him on the school when he first visited the campus. Now, Peterson is giving Robinson his endorsement to become the full-time successor.

"I can't publicly go out and campaign," Peterson joked with a laugh. "But the bottom line is Chris Robinson is an unbelievably fabulous ambassador for the University of Arkansas at Pine Bluff, and his beautiful wife Kim," Peterson said. "They are UAPB. I sure hope that works out."

Robinson indicated Tuesday that he will apply for the permanent director's role.

Robinson is best remembered for leading the team to the 1994 National Association of Intercollegiate Athletics Division I title game. He's also been an assistant coach at UAPB and led the school's student of recruitment for six years before Peterson talked him into athletic administration.

"This is my alma mater," Robinson said. "This is where I played. This helped me become a man at the university, and I want to do my part to help the university as much as I can because I can. Also, I played here and a lot of teammates, a lot of guys I coached – I coached here for a while, extensively, and was in administration here – I just want to provide a product my former teammates including myself, my parents and my administrative staff would be proud of. So I will put my name in the hat to see if I can contribute in that manner to give our former athletes a reason to come back to the university where they chose to bring their talent and provide them something they're proud of. We hope they'll be willing to support it financially as well."

Robinson said UAPB has made "considerable" renovations within the athletic department in the past including upgrades to the J. Thomas May Field House and the weight room for the football program. He's hoping to add some facilities for the baseball and softball programs, as well as provide additional support for track and soccer.

The ongoing winter event in Pine Bluff has made it "a prime time" for UAPB to have an indoor football facility, Robinson said. The Golden Lions will kick off a six-game spring sports schedule Feb. 27 at Simmons Bank Field against Texas Southern.

"All those things would be great to have for safety and for our kids to be proud of and our former athletes and alumni," Robinson said.

But fundraising is not the No. 1 goal in Robinson's mind at the moment.

"The goal for the end of this year is safety," Robinson said. "That is the No. 1 priority right now, to provide the best possible environment for our student athletes, coaches and administrators as well while we represent the UAPB brand. We have a lot of new norms. Although we're excited about numbers [of covid-19 cases] going down ... our No. 1 goal is to make sure our kids are safe for now and the future. Covid has taught us a lot, but one thing, I commend our coaches and our players for being resilient and understanding and making the adjustments. I would say we did a commendable job of training."

Peterson said if he were younger than 65 -- the minimum age for which people without underlying conditions are considered at risk for coronavirus -- he probably would have been around student-athletes and personnel a little more.

Before becoming athletic director at UAPB, Peterson came out of an earlier retirement from a similar role at the University of Arkansas at Little Rock to assist former University of Arkansas standout Anthony Lucas in coaching wide receivers at Pulaski Academy. He hasn't ruled out such a possibility for his future plans.

"I'd love to help kids and coaches," Peterson said. "I was an assistant high school coach when I came out of retirement. Anything to do with coaches and young people, that's what I'm all about. I grew up a son of a coach on the field, in the locker room and the gym all my life. The administrative side of things is something I moved into over the years, but I've always been a coach at heart."

The interaction Peterson was missing did not affect Robinson in his assistant role.

"We were extremely hands-on, other than snow," he said. "It was a hands-on position to be able to work with Coach Peterson via satellite plus being in the office as well. It was a good combination."

In addition to sports management and coaching, Robinson has experience in the corporate world as Walmart area distribution manager and regional and national sales manager in pharmaceutical sales. He also consulted sales representatives during the latter part of his 10-year run in pharmaceutical sales before returning to UAPB.

"It's a unique mix because of being in the arena of athletics for a while," Robinson said. "I was in the office of recruitment, but I did a lot of things with athletics and work hand-in-hand to assist where I could."

When the football season kicks off, Robinson will get to root on his two sons, both of whom are receivers on the Lions' football team. Christopher Robinson earned his bachelor's degree at UAPB and is playing as a graduate student, and Kylan Robinson transferred from the University of Central Arkansas for his junior season.

"I look back at where they are and where I was. They're much further along than where I was from a social standpoint," Robinson said. "I'm just excited about them that they're able to get that feel and love from UAPB that I got and their mom, also."