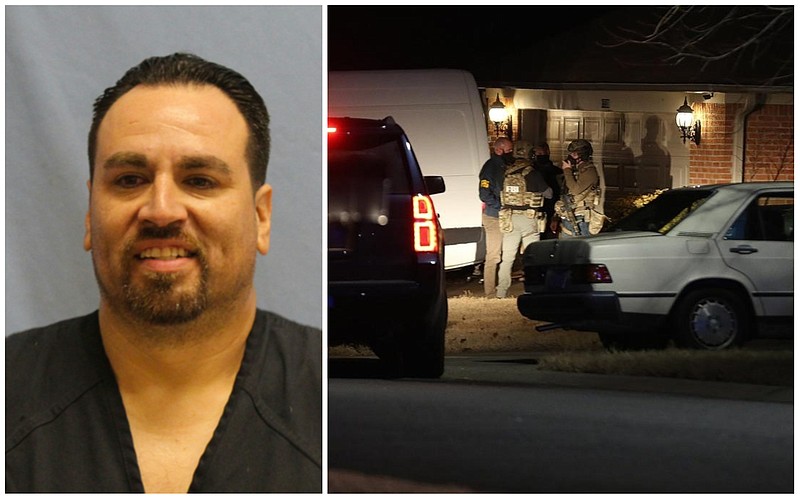 A federal grand jury in the District of Columbia has indicted a Conway man on seven charges -- including assault -- after authorities say he was captured on video using an American flag to beat a police officer during the U.S. Capitol riot on Jan. 6.

Peter Francis Stager, 41, used a "deadly or dangerous weapon," a flagpole, to "forcibly assault, resist, impose, impede, intimidate and interfere with an officer," according to the indictment, which was unsealed Wednesday.

The officer was identified as B.M. of the Metropolitan Police Department in Washington, D.C., who was stationed in an archway outside the Capitol building during the melee.

"From this archway, alongside other uniformed law enforcement officers, B.M. observed hundreds of individuals gathered outside," wrote FBI Special Agent Jason T. Coe in the statement of facts filed in the case.

Based on tips and a review of two videos on a Twitter thread, the FBI determined that Stager was beating B.M. with a flagpole that had the United States flag affixed to the other end, Coe wrote.

In one video, a man identified as Stager can be heard saying, "Everybody in there is a treasonous traitor. Death is the only remedy for what's in that building," referring to members of Congress in the U.S. Capitol, Coe wrote.

The Jan. 6 riot escalated from a "Stop the Steal" rally in which supporters of former President Donald Trump entered the Capitol and attempted to stop Congress from certifying the Electoral College vote indicating that Joe Biden had won the presidential election. Five people died during the riot while members of Congress cowered in their offices and bathrooms.

Stager was initially arrested Jan. 14 in Conway on one count of obstructing a police officer from his duties during a civil disorder.

Michael R. Sherwin, acting U.S. attorney for the District of Columbia, said at a Jan. 12 news conference that criminal complaints were being filed as quickly as possible so people could be arrested in connection with the riot, and that additional charges could be added later.

According to the federal court record in the District of Columbia, Stager now faces the following charges:

Besides Stager, the grand jury also indicted two other men accused of assaulting police officers during the Capitol riot: Jeffrey Sabol of Colorado and Michael John Lopatic Sr. of Pennsylvania.

The grand jury returned the indictment on Jan. 29, but it was sealed pending Lopatic's arrest and further investigation, according to a motion to seal.

Lopatic was arrested on Feb. 3, according to a subsequent motion to unseal the case file.

On Jan. 22, Chief U.S. Magistrate Judge J. Thomas Ray in Little Rock ordered that Stager be returned to the District of Columbia and remain in custody "until all charges in this matter are resolved."

Efforts to reach Frank Shaw, an attorney who represented Stager at the Jan. 22 hearing, were unsuccessful Wednesday.