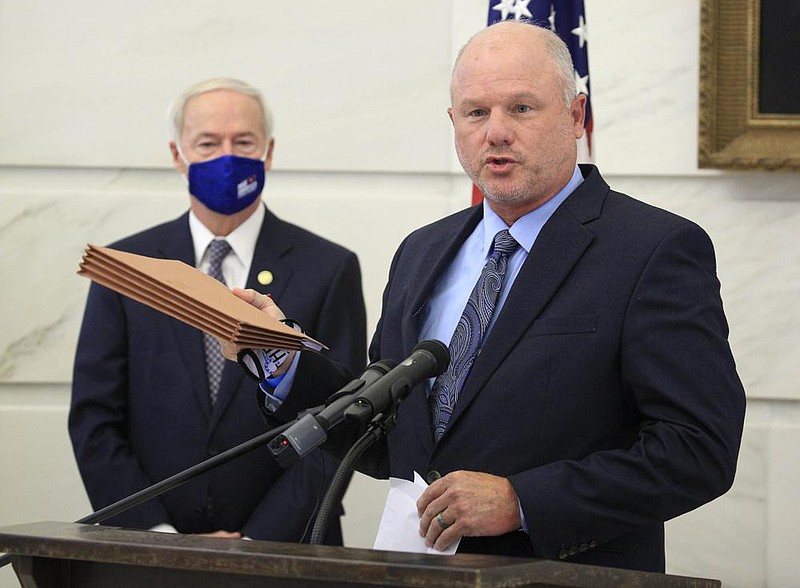 “I am making this decision because my commitment to our state and our country is greater than my loyalty to any political party,” he said in a video posted on Twitter.

Hendren said he’s also founding a group called Common Ground Arkansas to find and support leaders willing to work together ‘’instead of continuing to push us apart.

“We want folks from both parties and like me now no party at all to join us,” he said.

Afterward, Hendren said he doesn’t have a specific timeline for making a decision about running for governor.

“This is not about me starting a governor’s campaign,” he said. “We’ll look at it down the road.”

Having spent 4 years as @ARHouseCaucus GOP leader, 4 years as the @ARSenateGOP leader and last 2 years as @ArkansasSenate President, it was not an easy decision to leave the @GOP but today I announce I’m leaving to become an Independent. Statement below https://t.co/nwyFwhJQQ3

Hendren is the nephew of Republican Gov. Asa Hutchinson, who is barred by term limits from seeking re-election.

Republicans Sarah Huckabee Sanders and Leslie Rutledge and Democrat James Russell are the announced candidates for governor next year.

Sanders is a former press secretary for President Donald Trump and the daughter of former Republican Gov. Mike Huckabee. Rutledge is the state’s attorney general.

In a written statement, Rutledge said: “While I appreciate Senator Hendren’s and his family’s public service, I am disappointed by his decision to leave the Republican Party. As the first woman and first Republican elected Attorney General of Arkansas, I am proud of our accomplishments as the majority party which reflects the views and values of everyday Arkansans. We are all in this together, and I will always fight for our conservative values and constitutional rights to Make Arkansas First.”

Hutchinson said in his own written statement: “I have worked for over 40 years to build the Republican Party in Arkansas, and we have been successful by becoming the majority party and using our majority to lower taxes, reduce regulations, transform government and protect life. Sen. Hendren has been a big part of that success story in leading the senate and working to find solutions. Jim is family and his heart is in service and I know his motivations are pure. While I understand and identify with the concerns expressed by Sen. Hendren, I am convinced that for me the best pathway for continued conservative governance is through the GOP.”

This story has been updated. It was originally published at 9:34 a.m.