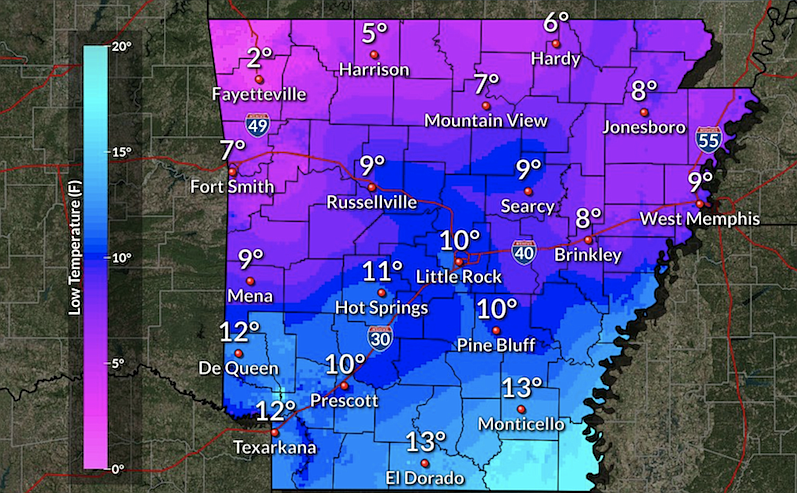 Visit idrivearkansas.com for a live map of road conditions.

The National Weather Service cautioned that snow melting off buildings or roofs could cause large icicle and ice sheet formations to fall in dangerous heavy chunks with sharp edges.

Forecasters also caution against walking on lakes and ponds with frozen surfaces, as it could result in serious injury or death.

Due to inclement weather, area hospitals are making accommodations to ensure their employees remain safe getting to and from work.

At UAMS Medical Center, several employees have stayed at the hospital or in nearby hotels this week, according to spokesperson Katrina Dupins. UAMS provides cots, showers, toiletries and meals, Dupins said.

Whenever there’s a threat of inclement weather, CHI St. Vincent Infirmary allows staff to stay overnight or sleep between shifts when it is not safe for them to travel, according to Bonnie Ward, director of marketing and communications at the hospital.

In inclement weather, the hospital also provides free meals for employees who cannot go home between shifts, Ward added. The hospital coordinates transportation to and from work with volunteer drivers for those employees, Ward said.

The depth of snow measured in Little Rock on Thursday morning tied a record set in 1918, forecasters said.

The snow, measured at Adams Field at the Bill and Hillary Clinton Airport, was 15 inches deep, the National Weather Service said in a Twitter post.

According to meteorologist Lance Pyle not all totals were complete yet, but he said, “there’s probably going to be a lot of records.”

Additionally, most weather warnings had been canceled as of Thursday morning, apart from a “hard freeze warning” in effect for southern parts of the state from 6 p.m. Thursday to 10 a.m. Friday, the weather service said.

After the second round of snow this week, White Hall saw 11 inches of new snow, while 10.8 inches was reported in Bauxite; 8.5 inches in Arkadelphia; 6.8 inches in Cabot and 7.5 inches measured at the North Little Rock Airport, according to Pyle.

Temperatures are expected to get warmer in the following days, Pyle said, with a high of 32 in Little Rock on Friday and a high of 41 on Saturday.

As a result, this weekend should see some ice melting, he added, with the roads getting better each day.

He cautioned nights will still be cold, with a low of 9 degrees predicted Thursday night and 14 degrees on Friday night.