Whiteout, ice cited for I-40 crashes 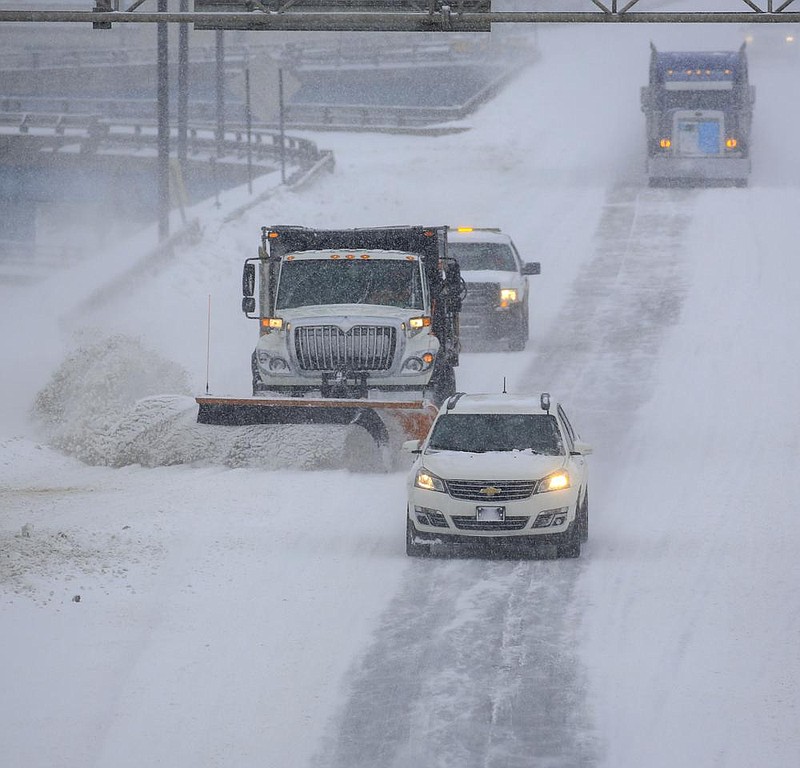 A state Department of Transportation snowplow clears the way Wednesday on westbound Interstate 30 in Little Rock as a second snowstorm socks the state. “We are plowing like crazy,” agency spokesman Dave Parker said, noting the many accidents occurring. More photos at arkansasonline/218snow/. (Arkansas Democrat-Gazette/Staton Breidenthal)

Heavy snowfall blinded motorists Wednesday as vehicles crashed in a slow chain reaction on an icy Interstate 40 near Lonoke.

Arkansas State Police said the accidents were spread over a 30-mile stretch, and involved a state trooper who was parked along the westbound I-40 lanes with blue lights flashing trying to warn drivers to slow down because there was a wreck ahead.

An 18-wheeler jackknifed, hitting Sgt. Chuck Lewis' patrol car, spinning it into a tree line on the north side of the interstate, according to a news release from state police. Neither Lewis nor the truck driver was seriously injured.

"From 10 a.m. to 2 p.m., it was whiteout-type conditions," said Dave Parker, a spokesman for the Arkansas Department of Transportation.

"We've had 22 accidents today, statewide," Parker said Wednesday afternoon. "The problem area has been I-40. First, we had five or six cars collide, and there was a tractor trailer involved near Lonoke, on the westbound side. Then we had a couple of smaller accidents on I-40 behind it.

"Then we had incidents on I-40 eastbound. That was the really big one. Seven tractor trailers near Lonoke."

Parker said he didn't know if the tractor-trailer rigs had crashed or slid off the road, just that they were involved.

Then a tractor-trailer rig stalled in the eastbound lanes of Interstate 40 near Galloway, so the Department of Transportation was routing all eastbound traffic off the interstate onto U.S. 70, where workers had already plowed snow from the pavement, Parker said.

After an ice storm last week, two winter storms moved through Arkansas this week, the first Monday and the second Wednesday, blanketing the state in a foot of snow and plummeting temperatures to well below zero.

On Wednesday, Dennis Cavanaugh, a meteorologist with the National Weather Service in North Little Rock, said he didn't have totals for the two snowstorms because the second one was still underway, with heavy snow falling south of Little Rock, stretching from Pine Bluff to Arkadelphia.

"It's pretty intensely ongoing right now," Cavanaugh said early Wednesday afternoon. "They're probably getting snowfall rates of 2 inches per hour. It's hard to verify because it's hard to get a hold of somebody. Everybody's out trying to help somebody right now."

That was before the week's second winter storm Wednesday, when 6-8 inches of snow was forecast to fall on a large swath of Central Arkansas. Record snowfall for the month of February in North Little Rock is 15.6 inches.

The first snowfall of the week was accompanied by low temperatures, setting an apparent record low of minus-20 at Fayetteville's Drake Field, where weather records have been kept since 1949. Other low temperatures this week include minus-15 at Clarksville and minus-14 at Mena, Cavanaugh said.

Parker said the single-digit weather made it difficult to pre-treat highways with rock salt or brine before the snow started this week.

"Passenger safety is our main priority," said Shane Carter, a spokesman for the airport. "Our terminal remains open for displaced passengers."

The brutal cold and snow put pressure on power grids.

Entergy Arkansas implemented rolling outages Tuesday that affected about 60,000 customers, in groups of 20,000, for 30-60 minutes, said Brandi Hinkle, a spokeswoman for the utility.

"No customers had more than one forced outage," she said Wednesday in an email. "If we do it again, we will work to keep it at less than 60 minutes, but could affect a larger number of customers and more at a time. It's all depends on how much power we need to shut down and how quickly."

"We were unable to alert customers beforehand last night, because the MISO direction came through with immediate needs to force outages," Hinkle said Wednesday, referring to Midcontinent Independent System Operator, which delivers electric power to much of Arkansas, along with 14 other states and part of Canada.

"We were afraid that could happen, which is why we encouraged customers to be prepared for potential outages and curtail their use as much as possible," Hinkle said in an email. "There is still a possibility for more controlled outages, depending on demand. They are not scheduled."

Hinkle said Entergy Arkansas tries to alert the media and customers when they know there will be forced outages, but sometimes it's not possible.

"Continued lower energy use will help offset the likelihood of future controlled outages during the remainder of this winter weather period," she said. "There is still the possibility of power outages from weather-related damages to equipment, especially from freezing rain. We are prepared to make repairs and restore power as quickly as we can safely do that."

Entergy Arkansas has about 715,000 customers.

According to poweroutage.us, which monitors outages across the country, only 92 Arkansans were without electricity late Wednesday, compared with 2.4 million in Texas, where snow, ice and low temperatures caused a "catastrophic failure of the state's power grid," according to the Houston Chronicle.

"The Texas power grid, powered largely by wind and natural gas, is relatively well equipped to handle the state's hot and humid summers when demand for power soars," according to the Chronicle. "But unlike blistering summers, the severe winter weather delivered a crippling blow to power production, cutting supplies as the falling temperatures increased demand."

Millions of Texans have been without power for days, and the outages may continue into next week.

Southwestern Electric Power Co., which serves 14 counties in Arkansas, all along the western part of the state, implemented rotating controlled outages Monday and Tuesday, said Peter Main, a spokesman for the utility.

Main said the Southwest Power Pool, which controls the supply of energy in part of Arkansas, lowered its emergency level to EEA1 on Wednesday and didn't request any reduction in load from utilities.

"However, we continue to ask customers to conserve energy as part of the ongoing emergency," he said. "Just a degree or two reduction on the thermostats and less lighting and appliance use can and does make a difference when multiplied by thousands of customers."

SWEPCO's outage map showed 37 Texarkana customers to be without power early Wednesday evening. But the map revealed no other Arkansas outages at that time. Their power was expected to be restored Wednesday night, according to the website.

At the peak, Arkansas' 17 local-level electric cooperatives had about 14,000 outages Tuesday morning, said Rob Roedel, a spokesman for the Electric Cooperatives of Arkansas, which has more than 500,000 customers in Arkansas and surrounding states. That number had been reduced to about 20 by the end of the day Tuesday.

Late Wednesday, Roedel said "we have scattered outages at Ashley-Chicot Electric in Hamburg."

But that was it.

The winter precipitation will move out of the state today, according to the National Weather Service.

"Temperatures will warm up to near freezing across much of the state on Thursday and will continue to climb above freezing into this weekend resulting in a fairly rapid snow melt on Saturday and Sunday," according to the forecast. 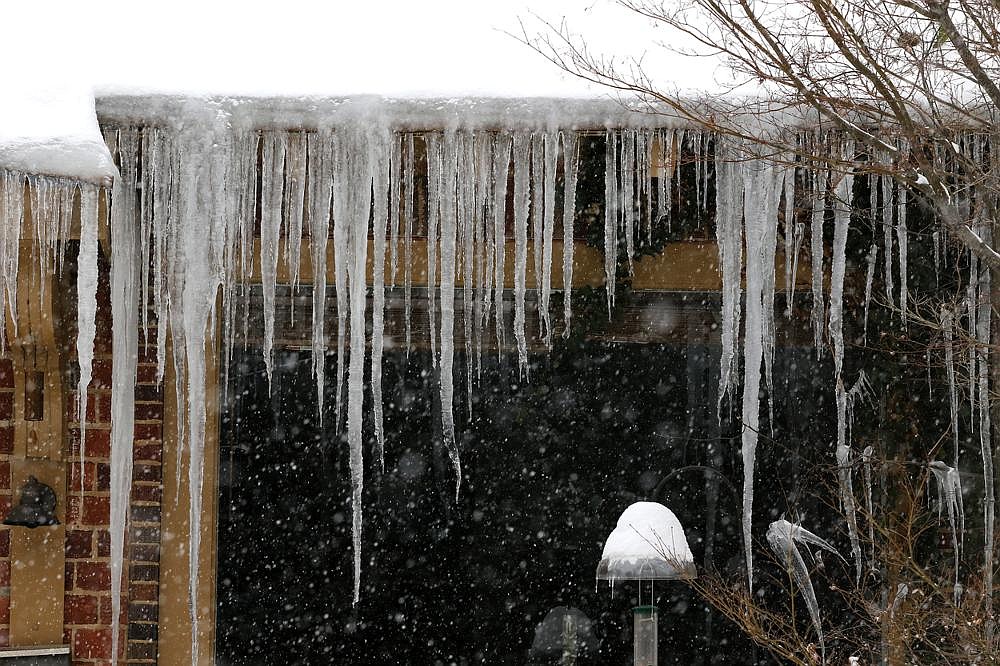 As snow picks up Wednesday, icicles hang from a house in the Hillcrest neighborhood of Little Rock. (Arkansas Democrat-Gazette/Thomas Metthe) 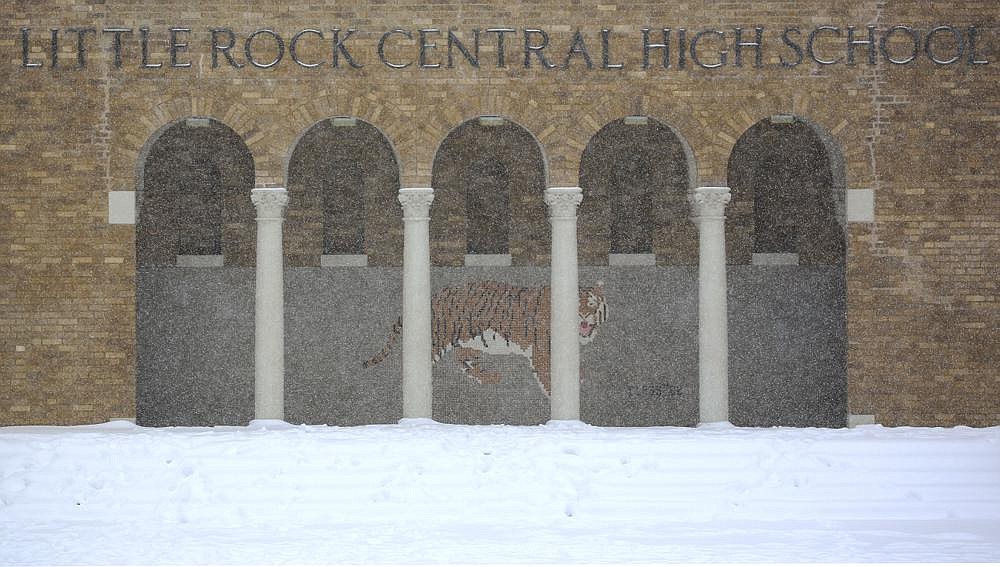 Falling snow layers over the steps at Little Rock Central High School on Wednesday as a second round of heavy snow hits the state. The snow was forecast to end today, but cold weather will continue for another couple of days. (Arkansas Democrat-Gazette/Staton Breidenthal) 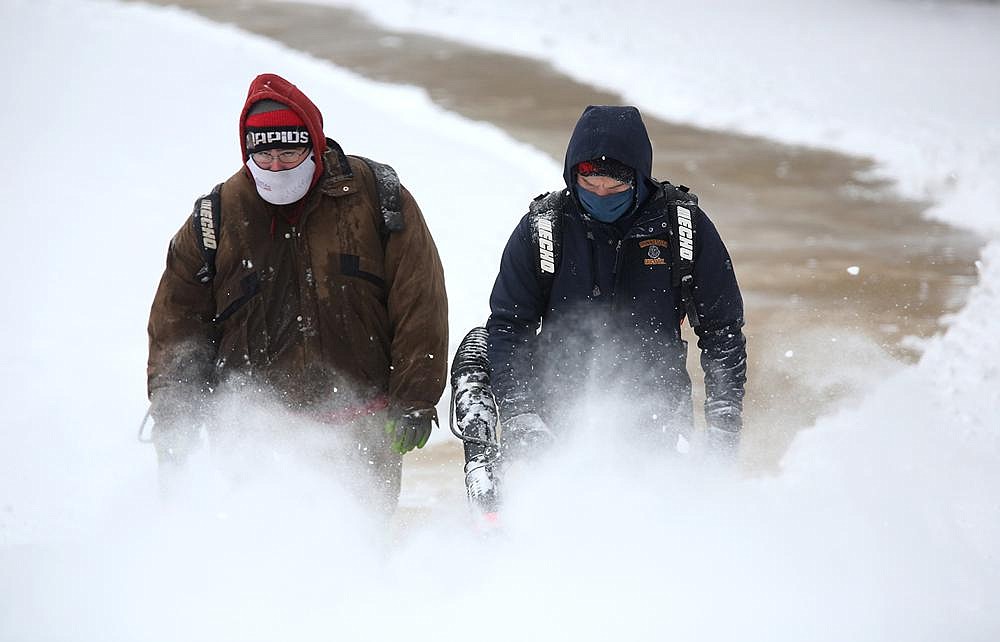 Lee Anderson (left) and Ben Hall of the University of Arkansas facilities and grounds department use leaf blowers Wednesday to remove snow from the northwest corner of Donald W. Reynolds Razorback Stadium on the Fayetteville campus. (NWA Democrat-Gazette/David Gottschalk) 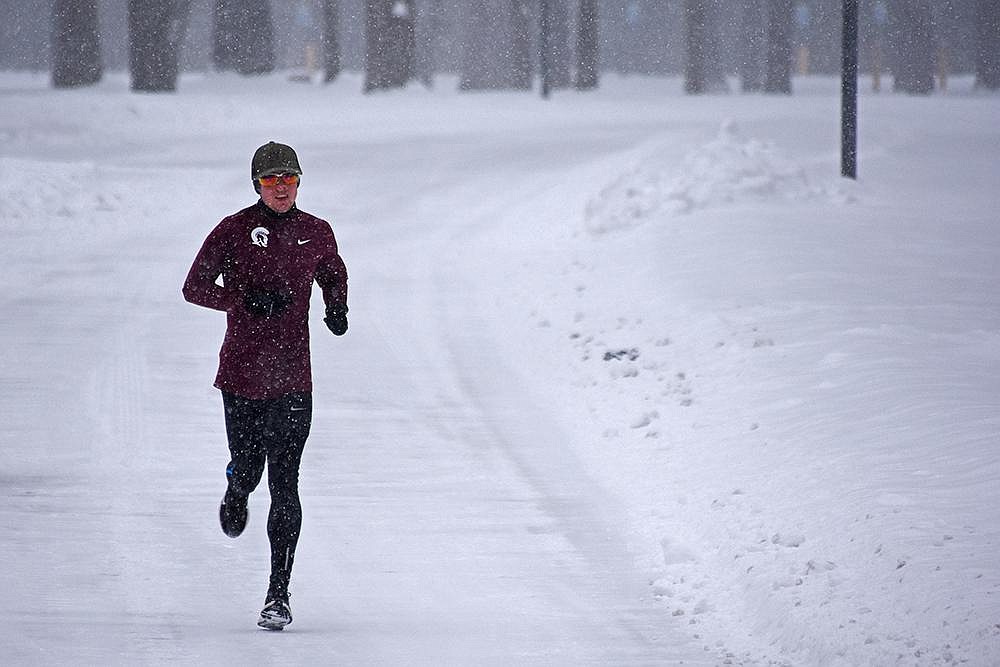 Andrew Payton, a member of the University of Arkansas at Little Rock cross country team, goes for a run around the UALR campus Wednesday. (Arkansas Democrat-Gazette/Staci Vandagriff)
ADVERTISEMENT