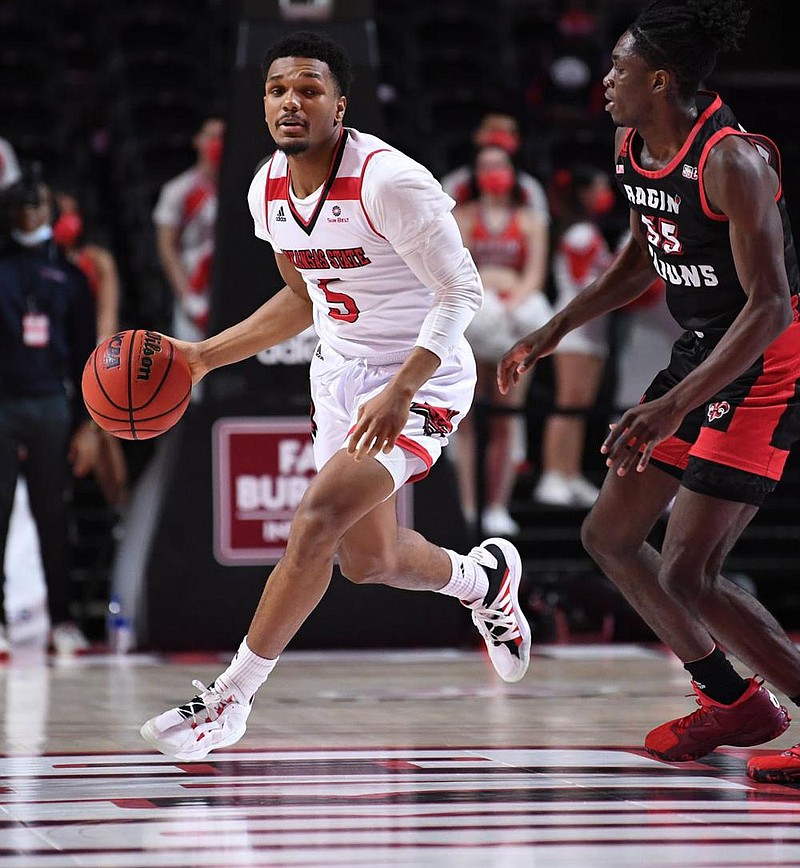 ASU had earned a a 73-62 victory that night, but the redshirt senior finished 1 of 4 from the field with 2 points and 1 rebound in 19 minutes.

"I was leaving the arena, I saw Christian in there shooting," Balado said. "In those times, you kind of leave him alone. He's in his own world. But I knew Saturday he would come in ready to play because he wants to do so well for this program."

In Saturday's rematch against the Trojans in Little Rock, Willis hit a game-winning baseline jumper with 12 seconds to play, propelling the Red Wolves to a 67-65 win and the weekend sweep over their in-state rivals.

The extra shots he'd put up the night before paid off.

"I just wasn't happy with the way that I played [Friday]," Willis said afterward. "I didn't feel like I played to my level. I just wanted to put up a few extra shots so I could be prepared for today."

After a 3-5 start to the Sun Belt season, ASU (10-9, 7-5 Sun Belt) has won five of its last six and sits in second place in the conference's West Division, and Willis has played a big role in the turnaround.

His statistics pale compared to those of teammates Marquis Eaton, Caleb Fields or Norchad Omier, but Willis has put together another fine season in his fifth year with the Red Wolves, averaging 7.2 points per game, and leads the league shooting 56.1% from three-point range. In 22.4 minutes per game, he's provided ASU with a steady veteran hand to lean on in conference play.

"His role is to be the best defender you can be out there and to make shots when needed, and he's doing that," Balado said.

Willis was unanimously voted a team captain by his teammates before the season, and his leadership was crucial after the Red Wolves fell to 3-7 on Jan. 2. Covid-19 kept Willis from ASU's first conference games that weekend, and without him, the Red Wolves were swept by Louisiana-Monroe.

Willis was back when ASU swept the Warhawks two weeks later, and since his return, the Red Wolves have only lost three games. On a team that relies on young players such as Omier, Fields and Antwon Jackson, Willis' presence has had a calming effect.

"You could see the difference in our team when he came back," Balado said. It gave us another veteran that understands how to do this. When you throw in some young guys on the road in this conference, a guy like Christian helps you."

Willis has been hard on himself over the course of the season.

"It's been a very humbling season for me," he said Saturday.

Yet Willis has been vital for ASU, no more than with his late heroics against UALR.

"He's the hardest worker I've had here," Balado said. "The basketball gods they praise guys like that. Those are the guys that end up making big plays."

Arkansas State junior transfer Karolina Szydlowska is averaging 6.8 points and 5.9 rebounds per game in her first season with the Red Wolves (9-9, 4-8 Sun Belt), and has upped those numbers to 7.3 ppg and 7.3 rpg over her last eight games.

Since joining the starting lineup after junior Jireh Washington's season came to an end, Szydlowska is beginning to look more comfortable with ASU.

"She's still trying to adjust to the speed of the game at this level, ASU Coach Matt Daniel said. "It takes junior college players about 14 or 15 games to do that usually. She's finally kind of settled into a groove on most nights."

The 6-0 forward from Poland joined the Red Wolves from Seward County (Kan.) Community College, where she was coached by ASU assistant Lizzie Nessling and chose the Red Wolves over offers from Nebraska, Colorado and Illinois.

Against Louisiana-Lafayette on Feb. 5, Szydlowska showed her ability by pulling down 16 rebounds, and she's proven capable of stretching defenses with her scoring touch, and went 6 of 13 from the field against UALR on Feb. 12.

She holds two more years of eligibility, and Daniel is excited to watch her develop.

"She's a very versatile player," Daniel said. "My hope is she is a 10-15 point scorer and five to seven rebounds a night rebounder. I think she's got the capability of doing that."

Have to win 'ugly'

In order for UCA to qualify for the conference tournament, which is to be played in Katy, Texas, from March 10-14, Rushing sees two key components: Cutting down turnovers and offensive rebounding.

The Sugar Bears' 366 turnovers lead the conference, and ball security is among Rushing's primary concerns. But so is rebounding. UCA shoots worse than all but two Southland teams, hitting 35.5% of their field goals, but outrebounds its opponents by 5.6 boards per game.

To regain their winning form and close out the season on a run, Rushing wants to see her team hold onto the ball and collect its misses.

"This year, a bad shot is better than no shot for us, because no shot means you turned the ball over," Rushing said. "If we turn the ball over, it's a missed opportunity. If we get a shot, we have a chance for a second and third shot."

In search of a win

The University of Central Arkansas' last victory came on Jan. 6 at McNeese State, and the Bears (3-15, 2-8 Southland Conference) have lost eight-in a row as they head to Nicholls State this weekend. The Colonels enter 9-2 in the conference and ride in on back-to-back wins, but the meeting may offer the Bears a chance to snap their losing streak.

The last time the teams met, on Jan. 16, host UCA fell 74-72 to the Colonels at the Farris Center. In one of their closest conference losses of the season, the Bears made use of their size, outrebounding the Colonels 41-34 and finished with 30 points in the paint. Senior forward Jared Chatham scored 14 points and recorded 18 rebounds that afternoon.

"We took advantage of our size," Coach Anthony Boone said. "We'll try to do the same thing this weekend when we have a matchup with someone who isn't used to guarding bigger players."

Six games remain for UCA, and the Bears are still hovering around the final conference tournament spot in the league standings even without a win in nearly six weeks. Against a team it matches up well with this weekend, UCA will seek a much-needed win.

"It would turn the guys minds around right now," Boone said. "I think in the back of their minds they might be thinking 'here we go again' when things start to go bad. We just need something positive to happen."

Redshirt sophomore ShiCoriya Orr is expected to return for the University of Arkansas at Pine Bluff women (2-14, 1-9 Southwestern Athletic Conference) when the Golden Lions travel to Texas Southern on Sunday. Orr, who has played in only three games this season, has been held out with a hip flexor strain since a Dec. 29 loss to Oklahoma.

Orr's return will deliver UAPB team starved for a much-needed scoring threat over the final six games of the season. Orr, who sat out 2019-20, averaged 11.8 points per game at Chattahoochee Valley (Ala.) Junior College and scored 19 against Arkansas State earlier this season.

"She's going to help us with our scoring drought we've had," Golden Lions Coach Dawn Brown said. "She can score at all three levels. That's something that we've been missing in the flow of our offense."

Orr will be limited in her initial return but could be a key contributor to a team that remains on track to qualify for the SWAC Tournament despite losing nine consecutive games.

"We'll see the type of physical shape she is going to be in," Brown said. "That's something we'll keep our eye on as we work her back into the team."