OPINION | JANET B. CARSON: The winter of our discontent 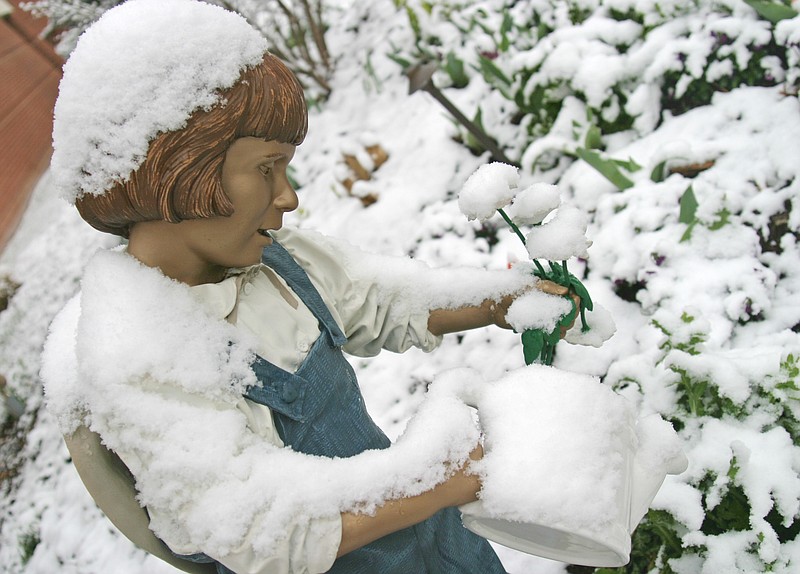 Few of the many plants damaged by the snowstorm need immediate attention, but most should be left alone and assessed in the spring. “There, Now You Can Grow” by sculptor J. Seward Johnson was snowcapped in 2013 at Walton Arts Center in Fayetteville. (Democrat-Gazette file photo)

This past week, gardeners watched with dread as the temperature dropped lower and lower. A mild winter had many plants coming out of dormancy well ahead of schedule, which only added to the worry.

With first forecasts of temperatures in the low 20s, covering that tender new growth seemed likely to help, but then it dropped below 10 degrees, and in some parts of the state, below zero. To add insult to injury, we went almost a week without getting above freezing.

It is doubtful how much good — if any — covering plants did. But for many of us, it may have helped us feel better, and I have to say, I saw some clever ideas.

One gardener had plants wrapped in frost blankets, then encircled with Christmas lights. Another used pipe insulator tubes on fig tree limbs. And I saw entire linen closets covering yards.

Then we got sleet and snow. The snow piled up in huge amounts all across our state. In most parts of the state, it has been a dry snow, which is preferable to a heavy, wet snow. Snow actually can be a good insulator of low growing annuals and perennials, so we will see what we have once it all melts away.

As the snow melts and temperatures rise above freezing, we can start walking the garden and taking a look at our plants. At first glance, we won't know everything that has happened. In fact, chances are pretty good that we won't know the extent of the damage for months.

There are a lot of factors at play. How hardy was the plant? Was it still dormant, or was it beginning to grow?

Winter annuals were covered up by snow, and that insulation may have helped. We still might see cold-burned foliage and blooms, and some dead plants. Some will rebound and begin to grow again, while others might be done for the year.

Winter vegetables, the same. Some tolerate cold much better than others.

If you still find life left in your annuals, wait until the weather warms up a bit and give them a light application of fertilizer to help them rebound. If they didn't make it, new plants will be arriving soon at nurseries and garden centers.

Spring bulbs were in a variety of stages. Those that just had foliage above ground will be fine. The snow actually will have helped protect them.

Those that were in bloom are gone. Some that had bloom spikes with tight buds might still open, but the stems will probably not recover. Snow bends them over or flattens them and they remain lying on the ground. Cut some bouquets and enjoy them inside.

Don't be too quick to prune out damaged growth. Some damage could be merely cosmetic — burned foliage. New growth this spring can cover up those problems.

For sure, we will have some frozen blooms that were open on camellias, flowering quince, winter jasmine and even some blueberries. Any buds that were showing color are probably ruined as well; but we can hope that those that were still tight and dormant will have the potential to bloom.

Wait until things are actively growing before assuming the worst.

One exception requiring immediate pruning action is broken limbs. If you see broken branches, clean them up as soon as they defrost. Don't start while they're frozen and fragile because you could bump and break nearby branches and foliage. But the dead parts must come off: Leaving dangling branches can lead to more damage. If left attached, they could fall off on their own and damage lower plants, or they could rip off, leaving gaping wounds. Try to make as clean a cut as possible and smooth out jagged wounds.

Other than broken branches, stick to your normal pruning schedule.

This weather event was a great example of why we don't prune plants early in winter — damage happens to the tissues most exposed to the cold. Dead limbs act as a buffer for good tissue underneath.

If there has been damage done earlier this winter, before whatever happened this week, we can prune it off later this month. If you had already pruned and the plant was damaged again and required more pruning, there might not be much plant left.

Some branches could be bent or lying down under the weight of the snow. If they are not broken branches, in time they should begin to stand up.

Two plants of special concern are big leaf hydrangeas and fig trees. Both of these plants can suffer winter damage in a cold season, even if they are dormant. This year, many of these plants had already sprouted new growth on the tips of the branches. Chances are good that we will see hydrangeas killed back to the soil line, and probably some major damage to figs.

It wasn't so long ago that many Arkansas gardeners called them "fig bushes" instead of "fig trees" because they froze back so often.

For all of these marginal plants, don't assume the worst and start cutting. Consider them "innocent until proven guilty" — give them a chance to start growing later this spring. If all of the new growth comes from the soil line, then cut off all the dead growth. But we can always hope.

Something else to look for on marginal plants is split stems. If sap was rising in the branches and it froze, sometimes we will see the bark exploding or branches that split. Those branches typically will die within the year, but if they're alive, enjoy any blooms first before pruning.

Arkansas winters have been growing warmer, so gardeners have been experimenting with marginal plants. This year, those experiments might not have fared well. Marginally hardy plants can survive a mild winter, but this past week was anything but mild. Still, stranger things have happened — so give your plants a chance at new growth this spring.

And I hate to be the one to say it, but it is only mid-February. We have to get through March unscathed before it's safe to declare winter over. Let's hope we have nothing else — winterwise — to experience this season.

I have said for years that you aren't a true gardener if you have never lost a plant. Well, I have a feeling there will be a lot of true gardeners this spring as we begin to recover from the Polar Vortex of 2021. Just think, there are so many new plants we can try!