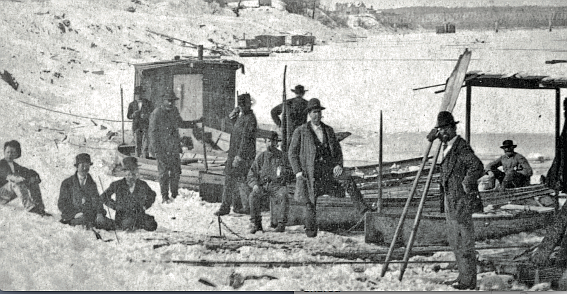 Several men stand beside small boats at the edge of the frozen Arkansas River in Pulaski County during the winter of 1876. (Special to the Democrat-Gazette)

The last time it snowed nearly a foot in Little Rock was Christmas 2012, and then-Mayor Mark Stodola decided to trek home from his mother's house, uphill, in blizzard-like conditions of snow and ice.

Like the snowstorms last week, the 2012 winter storm was one of the more significant to hit Arkansas in years. But Stodola, a native Iowan accustomed to the snowy winters of the Upper Midwest, thought he could drive home.

It was when his van slid backward down the road and into a neighbor's driveway that Stodola opted to lead his wife and three kids on a nearly three-hour trek home through the snow and wind.

"My car immediately slipped into the neighbor's driveway next door, so that was not going to work," Stodola said.

But almost a foot of snow and ice coupled with 30-40 mph wind gusts during the Christmas storm of 2012 didn't compare to what Arkansans experienced last week, meteorologists said. With back-to-back snowstorms, single-digit temperatures and numerous broken records, the weather events of February 2021 are ones for the history books.

"The only thing I can tell you is this is compared to nothing in the past," said Ned Perme, the former chief meteorologist for KATV. "In the 40 years that I've been in the meteorological business and in the 34 years that I worked at Channel 7, I've never seen anything like it."

Not since March 6, 1875, had Little Rock seen so much snow; that day, observers recorded 12 inches of the white stuff.

What made last week's weather historic wasn't just the amount of snow but also the single-digit temperatures. On Tuesday morning, the temperature dropped to zero in North Little Rock, the fifth-coldest temperature on record in the city and the coldest recorded temperature since Dec. 22, 1989.

For Perme, there is no fear of missing out on these snowstorms after retiring in 2018. The esteemed weatherman said he much prefers taking in the storms from the comfort of his home rather than from a television studio.

"It's stressful and exhausting," Perme said of covering winter weather on-air. "And I have to tell you, I am so thrilled that I wasn't involved in it for this storm system."

Within memory for most, Christmas 2012 was the snowstorm of the decade with "near-blizzard" conditions, causing widespread power outages. From that storm, 17.5 inches fell in Perry County, and many locations around the state had their snowiest December on record, according to the weather service.

For Stodola, the blizzard-like conditions nearly trapped him and his family at his mother's house on Christmas Day in 2012. Although he made it home safely, Stodola's work had just began.

Stodola, who served as mayor of Little Rock for 12 years, knows better than most the politics of snow.

The ice and snow that day knocked out power for 85,000 homes and businesses in Pulaski, Garland and Hot Spring counties.

Many of the roads in Little Rock were covered with ice and snow; thousands were without power as Stodola mobilized the city's few snowplows and later took a helicopter ride with executives from electric utility Entergy to survey the damage.

"You know, I have colleagues -- mayor colleagues -- from around the country that will tell you that these snow events are the bane of a mayor's success," Stodola said. "That if you respond to these decisively and quickly and forcefully, citizens really appreciate it."

For those who are a bit older, the snowstorm of January 1988 was a significant one.

Cary Bradburn, then a reporter for the Arkansas Gazette, said he doesn't remember much about the storm that dropped 10-15 inches of snow over parts of Central Arkansas other than trying to get his car up a "dad-gum hill."

But now as a historian with the North Little Rock History Commission, the storm of January 1918 comes to his mind. After researching a fire at the Matthews building in North Little Rock from around that time, Bradburn stumbled across newspaper clippings about a major snowstorm.

Photographs show a frozen-solid Arkansas River and the Arkansas Capitol covered in snow.

Like 2021, 1918 was also a pandemic year, although the Spanish flu pandemic would not kick off for at least another month in earnest. Much of the capital region was shut down due to snow.

Last week's snow depth, measured at 15 inches on Thursday in Pulaski County, is tied with January 1918 as the most measured in the county, according to the National Weather Service. January 1918 was also the snowiest month on record in Little Rock until last week.

The rarity of a major snowstorm is what makes last week's storms so noteworthy. The cause of the storms was the "polar vortex," cold air from near the North Pole that moved south and gave Arkansas, Texas and much of the South a brief taste of what winters in Alaska may feel like.

"That's what brings us some of our rare arctic outbreaks," said Dennis Cavanaugh, a meteorologist with the National Weather Service in North Little Rock. "We're basically getting air that does not get a chance to get modified much from northern Canada all the way south, you know, almost to the Gulf Coast."

Reflecting on the "record-breaking" snowstorms in his weekly address, Gov. Asa Hutchinson noted how the storms knocked out power for thousands around the state, but he also said they "produced beautiful sights and sounds that we don't often enjoy in Arkansas."

"This rare winter storm soon will be history, and I know it has caused a hardship for many, but I hope that it has produced some warm memories as well," Hutchinson said.