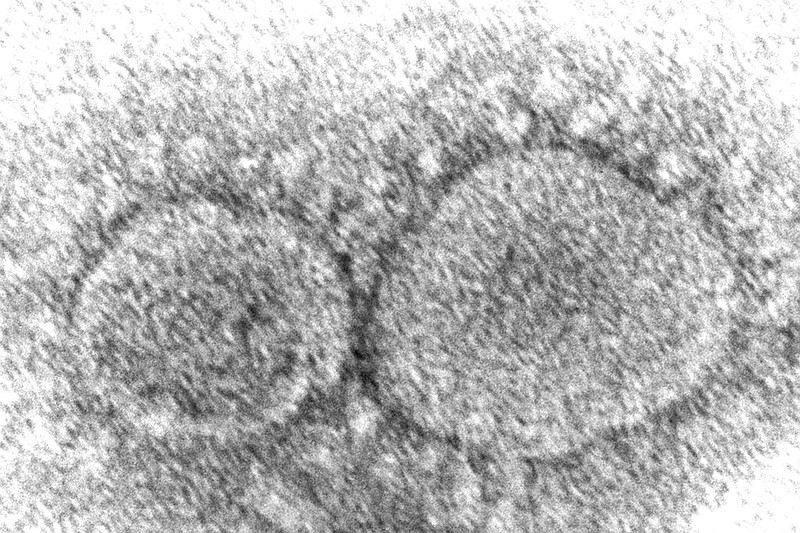 This 2020 electron microscope image made available by the Centers for Disease Control and Prevention shows SARS-CoV-2 virus particles which cause covid-19. According to research released in 2021, evidence is mounting that having covid-19 may not protect against getting infected again with some of the new variants. People also can get second infections with earlier versions of the coronavirus if they mounted a weak defense the first time. (Hannah A. Bullock, Azaibi Tamin/CDC via AP)

The Arkansas Department of Health on Monday reported a total of 480 currently active cases of covid-19 virus in the state's public school districts, 29 active cases in private schools and 158 cases in colleges and universities.

The active-case numbers for public and private schools were just about half the numbers of active cases reported by the state agency Thursday -- near the end of several days in which record-breaking snowstorms and bitter cold closed down in-school instruction through most if not all of the state.

The Fort Smith School District reported 16 active cases among students and employees, followed by the Fayetteville district with 14 cases.

Monday was the eighth consecutive school day of virtual instruction-only in the two districts. The virtual learning days were the result of the inclement weather.

The Little Rock district, in its nearly daily posting of covid-19 cases and quarantines among employees and staff, reported Monday that there had been three people diagnosed with covid-19 and five individuals quarantined between 3 p.m. Sunday and 3 p.m. Monday.

The Arkansas Department of Health's Monday report -- in addition to the decline of elementary and second school active cases of covid-19 -- showed that the number of currently active cases for colleges and universities is down as compared with last Thursday.

There were 158 cases reported Monday, down from the 269 reported late last week.

The University of Arkansas, Fayetteville had 38 active cases among employees and students, bringing the cumulative total of cases on the campus since June 15 to 3,625, according to the report.

The University of Central Arkansas had 17 active cases, according the latest figures. Arkansas Tech University had 11 cases, Lyon College in Batesville had 10 and Ouachita Baptist University in Arkadelphia had nine.