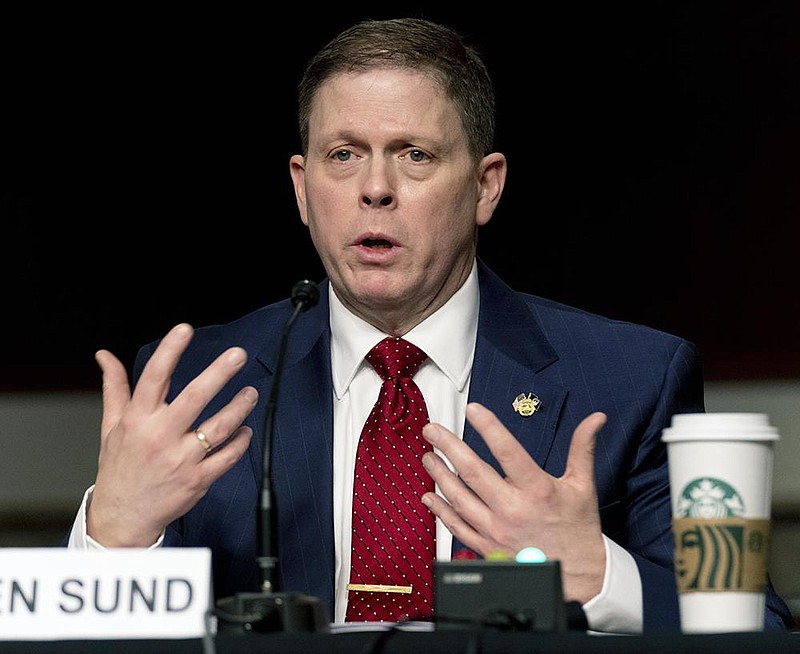 Three former top Capitol security officials and the chief of the Washington police on Tuesday blamed federal law enforcement agencies and the Defense Department for intelligence failures before the Jan. 6 Capitol riot and for slow authorization of the National Guard as the violence escalated.

"None of the intelligence we received predicted what actually occurred," former Capitol Police Chief Steven Sund told senators who are investigating security failures related to the attack. He called the riot "the worst attack on law enforcement and our democracy that I have seen" and said he witnessed insurrectionists assaulting officers not only with their fists but also with pipes, sticks, bats, metal barricades and flagpoles.

[Video not showing up above? Click here to watch » https://www.youtube.com/watch?v=thobhSl3SXM]

Sund; Paul Irving, the former House sergeant-at-arms; and Michael Stenger, his former Senate counterpart, said that they had not seen a report from an FBI field office in Norfolk, Va., that flagged an anonymous social media thread that warned of a looming war at the Capitol despite planning meetings with the bureau and others in federal law enforcement capacities.

They pointed to a breakdown in communication of some of the intelligence. Sund testified that he now knows the FBI report had reached the Capitol Police the day before the attack, but he had not personally seen it. He said that a Capitol Police officer assigned to a joint terrorism task force received the document the night before the riot and sent it to an intelligence division official on the force.

"It did not go any further than that," Sund said.

"How could you not get that vital intelligence?" asked Gary Peters, D-Mich., chairman of Senate Homeland Security and Governmental Affairs Committee, who said the failure of the report to reach the chief was clearly a major problem.

"That information would have been helpful," Sund acknowledged.

Even without the intelligence, there were clear signs that violence was a possibility on Jan. 6. Far-right social media users openly hinted for weeks that chaos would break out at the Capitol while Congress convened to certify the election results.

Sund said he did see an intelligence report created within his own department warning that Congress could be targeted on Jan. 6. But he said that report assessed the probability of civil disobedience or arrests, based on the information they had, as "remote" to "improbable" for the groups expected to demonstrate.

Robert Contee, acting chief of Washington's Metropolitan Police Department, also suggested that no one had flagged the FBI information from Norfolk, Va., which he said came in the form of an email. He said he would have expected that kind of intelligence "would warrant a phone call or something."

Contee laid the blame for the slow deployment of the National Guard solely on the Defense Department, noting that the Army had expressed reluctance to send in the troops as the violence escalated.

Contee, whose officers engaged in some of the most violent clashes of the day, described how he was frustrated at the speed of deployment of National Guard troops as the scope of the violence become clear. He recounted a phone call that included Capitol security officials, as well as D.C. leaders and Defense Department brass.

"My response to that was simply, I was just stunned," Contee added. "I have officers that were out there literally fighting for their lives, and, you know, we're kind of going through what seemed like an exercise to really check the boxes, and it was not an immediate response."

"I was stunned at the response from Department of the Army," Contee said.

The hearing was the first of many expected examinations of what happened that day, coming almost seven weeks after the attack and over a week after the Senate voted to acquit Trump of inciting the insurrection by telling his supporters to "fight like hell" to overturn his election defeat. Fencing and National Guard troops still surround the Capitol in a wide perimeter, cutting off streets and sidewalks that are normally full of cars, pedestrians and tourists.

The joint meeting of the Homeland Security and Governmental Affairs Committee and the Rules and Administration Committee was the first time the public has heard from Sund and Irving, the top two security officials at the Capitol on the day of the assault. Both resigned after the attack.

They have come under scrutiny over reports that they did not act swiftly enough to call for the National Guard.

Irving took issue with Sund's account that the former sergeant-at-arms rejected National Guard support because of "optics." He also disputed Sund's timeline of events Jan. 6 that indicated Irving waited a half-hour before approaching political leaders about calling in the Guard.

"Certain media reports have stated that 'optics' determined my judgment about using those National Guard troops. That is categorically false," Irving said. "'Optics' as portrayed in the media did not determine our security posture; safety was always paramount when evaluating security for Jan. 6."

Still, he acknowledged the security failures. "We now know we had the wrong plan," he said.

Some Republicans have sought to undermine the severity of the attacks by claiming that they were unplanned. In response to questions Peters, Sund, Contee and Irving all said that they believed the siege was coordinated.

"These people came with equipment, climbing gear," Sund said, adding that two explosive devices placed near the Capitol distracted authorities. Contee said there is evidence the attackers used hand signals and coordinated their use of irritants such as bear spray.

"No single civilian law enforcement agency -- and certainly not the [Capitol force] -- is trained and equipped to repel, without significant military or other law enforcement assistance, an insurrection of thousands of armed, violent, and coordinated individuals focused on breaching a building at all costs," he testified.

Sen. Rob Portman, R-Ohio, seemed somewhat surprised by the disclosures, calling for such training and for protective gear for officers, including helmets and gas masks.

Capitol Police Capt. Carneysha Mendoza testified to the violence she confronted Jan. 6. After she was called in early to duty at 1:30 p.m., she fought to keep rioters from damaging the Capitol, nearly breaking her arm and suffering burns from gas deployed in the rotunda.

"I received chemical burns to my face that still have not healed to this day," Mendoza told senators.

After fighting the mob for four long hours, she spent the next day at the hospital with the family of officer Brian Sicknick, who collapsed after suffering injuries during the siege and later died.

"It's sad to see us attacked by our fellow citizens," Mendoza added.

Information for this article was contributed by Luke Broadwater of The New York Times; by Mary Clare Jalonick, Michael Balsamo, Lisa Mascaro, Lolita Baldor and Nomaan Merchant of The Associated Press; and by Mike DeBonis and Karoun Demirjian of The Washington Post.