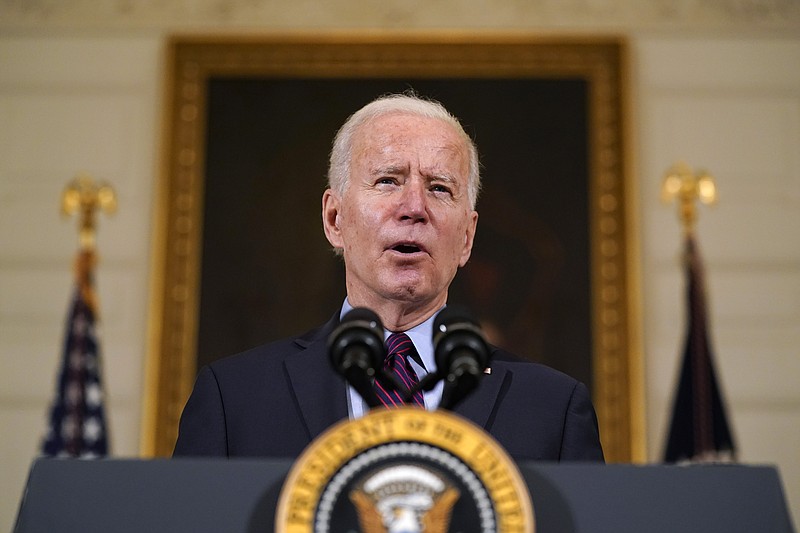 Biden proposed the 100-day pause on deportations during his campaign as part of a larger review of immigration enforcement and an attempt to reverse the priorities of former President Donald Trump. Biden has proposed an immigration bill that would allow legal authorization for an estimated 11 million people living in the U.S. illegally. He has also instituted other guidelines on who immigration and border agents should target for enforcement.

Tipton, a Trump appointee, initially ruled Jan. 26 that the moratorium violated federal law on administrative procedure and that the U.S. failed to show why a deportation pause was justified. A temporary restraining order that the judge issued was to expire Tuesday.

“In many ways, this case is about the proper limits of governmental power,” Tipton said in the 105-page order.

The Biden administration said in a statement Wednesday that Tipton’s ruling did not affect many of the steps it was taking.

“After four years of an administration that separated children from their parents, deported veterans and denied those fleeing persecution the right to ask for protection, this administration will bring order and humanity to our immigration enforcement system,” the White House said.

Tipton said Texas probably will prevail in its argument that the Department of Homeland Security violated the Administrative Procedure Act by not providing a reasoned justification for the plan.

“The core failure of [the department]” lies “in its omission of a rational explanation grounded in the facts reviewed and the factors considered,” Tipton said. “This failure is fatal, as this defect essentially makes [the department’s] determination to institute a 100-day pause on deportations an arbitrary and capricious choice.” The judge said the new administration did not consider fully the resulting financial strain on Texas, from costs associated with detaining more migrants and providing services such as education to unaccompanied children.

Tipton agreed with the Homeland Security Department that presidents wield extensive authority over immigration policy. But the judge said the executive cannot “suspend” or “dispense with” the legislative powers of Congress. That was a reference to a U.S. law that says the government “shall remove” so-called criminal migrants within 90 days of a final removal order against them, the judge said. The Biden administration interpreted those words to mean it “may remove” people within that time frame, “when it unambiguously means must remove,” the judge said.

The judge also agreed with Texas that pausing deportations will increase costs for detention facilities in Texas because a “significant number of criminal aliens” who would otherwise be removed will be “moving freely within and into Texas” and probably end up detained again. Tipton noted similar costs for education, saying Texas spent between $26.7 million and $112.1 million to educate unaccompanied children in recent years, and that those costs would go up under Biden’s plan.

“Texas incurs real financial costs in providing public education to unaccompanied children,” Tipton said. “The record demonstrates that an increase in the number of unaccompanied children in Texas due to the 100-day pause would lead to an increase in its public education costs.” It was not immediately clear if the Biden administration will appeal Tipton’s latest ruling. The Justice Department did not seek a stay of Tipton’s earlier temporary restraining order.

On Wednesday, Biden lifted a freeze on green cards issued by his predecessor during the pandemic that lawyers said was blocking most legal immigration to the United States.

Trump last spring halted the issuance of green cards until the end of 2020 in the name of protecting the coronavirus-wracked job market.

On Dec. 31, Trump extended those orders until the end of March.

Most immigrant visas were blocked by the orders, according to immigration lawyers.

As many as 120,000 family-based preference visas were lost largely because of the pandemic-related freeze in the 2020 budget year, according to the American Immigration Lawyers Association.

It also barred entry to immigrants with employment-based visas unless they were considered beneficial to the national interest such as health care professionals.

Meanwhile, in the first five days since the Biden administration began to process the thousands of asylum-seekers waiting in Mexico, the United Nations High Commissioner for Refugees registered 12,000 people.

That’s nearly half the 25,000 active cases the U.S. government has cited.

People who have waited in Mexico and elsewhere to get hearings on their U.S. asylum requests are dealing now with a mix of hope and frustration, along with overloaded websites and telephone lines that never stop ringing.

The hurdles are far better than the wait often in wretched conditions of tens of thousands of asylum-seekers forced to choose between waiting in Mexico — or returning to Central America — under the Migrant Protection Protocols, or Remain in Mexico program. Instituted by the Trump administration in January 2019, the program sought to discourage asylum-seekers by making them wait in Mexico rather than releasing them with orders to appear for future court dates in the U.S.

The Homeland Security Department announced Wednesday that it would begin processing asylum-seekers with registered cases who have been living in a tent encampment on the banks of the Rio Grande in Matamoros, Mexico. Life in the camp has always been precarious, but it was especially hard hit by frigid winter weather that struck Texas and northern Mexico last week. Processing residents of the camp is a priority for the Biden administration, the statement said.

Last week, the U.S. government began processing a small number of asylum-seekers with active cases in San Diego. The processing is expected to expand to El Paso soon.

According to preliminary data from the U.N. agency, of the 12,000 people who have registered, some 4,000 are children or dependents and about 1,200 registered from outside Mexico.

Information for this article was contributed by Nomaan Merchant, Maria Verza and Julie Watson of The Associated Press; and by Erik Larson of Bloomberg News.

CORRECTION: The American Immigration Lawyers Association estimates there is a backlog of 473,000 people who have applied for family-based visas. An earlier version of this story incorrectly identified the association.