OPINION | TAKEOUT TASTINGS: The p's and queues of picking up a meal 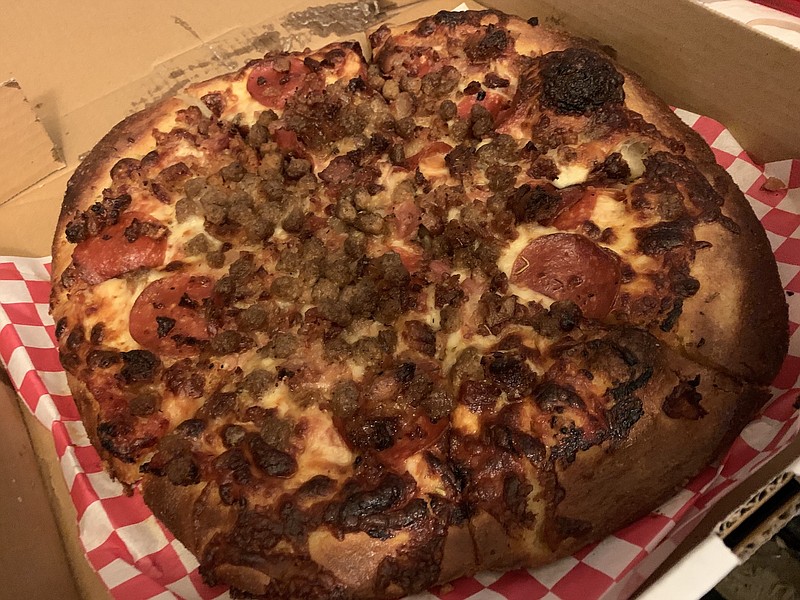 We picked up a pizza, a plate lunch and a pleasant sandwich this week before prodigious precipitation put a pause on our peregrinations after provender.

Certified Pies is an ambitious enterprise put together by a trio of enterprising entrepreneurs — CEO Kreg Stewart, general manager Samantha Stewart and executive chef Harlem Wilson — operating what they are billing as Arkansas' first Black-owned pizzeria out of a commercial kitchen on the back side of a West Markham Street shopping center. The menu offers wings and salads, but pizza is the principal product and based on what we had the other night, it's a good one.

The Boss Hog, a carnivore's delight available in 12- and 16-inch ($18.95) versions, puts a "signature red sauce base," a five-cheese blend and plenty of pepperoni, two kinds of sausage, beef and crumbled crunchy bacon on a hand-tossed crust. (You can tell it's hand-tossed because it's slightly irregular. As many of the best pizzas are.) Ours was just slightly overcooked, but as we like our crust firm and crunchy, that was rather an advantage than otherwise. The cheese layer was thick enough so that the pieces of meat did not, mostly, fall off into the box. The 12-inch pie will serve two regular diners or one really hungry one. We're guessing the 16-inch pie would do well for a family of four.

HOW IT WENT/HOW IT'S GOING: For now, Certified Pies is only certifying pies, etc., on weekends: 2-8 p.m. Friday-Saturday and 11 a.m.-2 p.m. Sunday. There is an online ordering system — two, at least, in fact — but they're only taking phone orders right now, and getting through on the phone is entirely a matter of catching somebody between calls; we got the voicemail twice before we got through. We were told it would be 45 minutes for our pie to be ready. That was overly optimistic; we discovered, when we arrived right on time, at least a dozen vehicles, some in designated "curbside" parking spots and others in line outside the back door, awaiting orders.

After about 20 minutes an employee came to our car window and verified our identity; a few minutes later, another came by with a portable point-of-sale device through which we paid; and a few minutes after that came our pizza — a half-hour beyond the promised hand-over time. We'd say, since we got our pie home in fairly short order (though making even a right turn out of the shopping center onto West Markham Street took awhile), it was worth the wait. 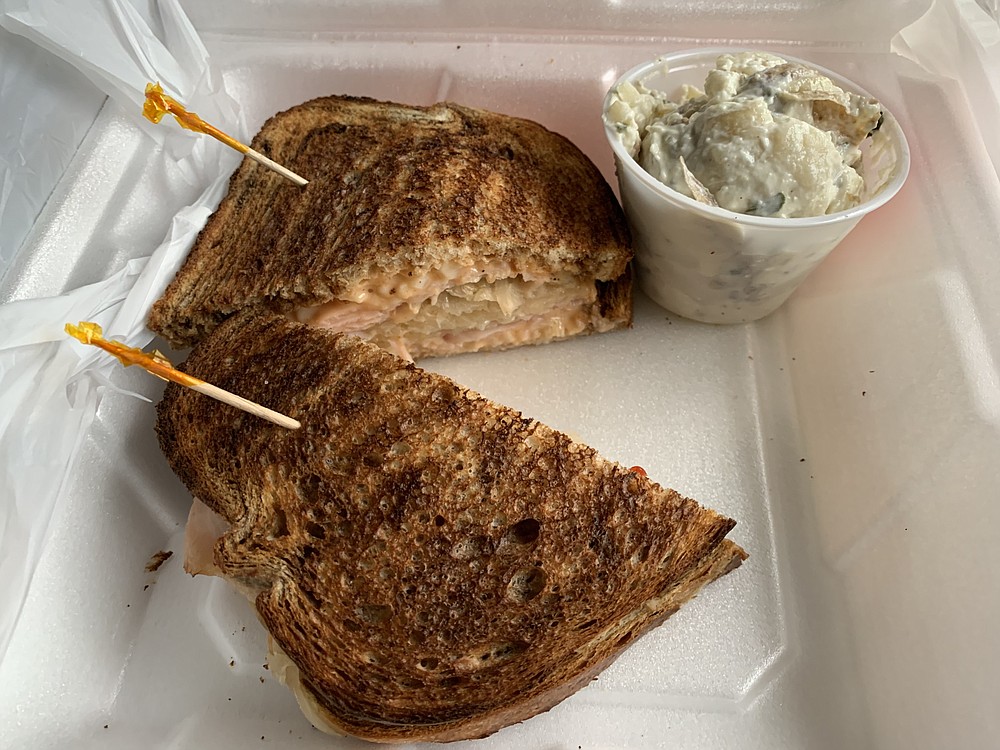 Corned beef is too expensive at the moment, so the Capitol Bistro, on Capitol Avenue a block from the state Capitol, is making Reubens with turkey instead. A pleasant potato salad is a side option. (Arkansas Democrat-Gazette/Eric E. Harrison)

WHAT WE GOT: Turkey Reuben ($8.95 including tax) with side potato salad

Located on the ground floor of the Victory Building, where Capitol Avenue meets Victory Street — indeed, Victory passes through the building, and there's a Subway outlet on the other side of the arch — this cute little spot offers breakfast and lunch, as well as scarves and other craft items. Our first choice was the Corned Beef Reuben, but the nice lady running the front-of-house operation explained that the cost of corned beef was prohibitive, and wouldn't we like a nice turkey reuben instead. And so we did. It came out on grilled rye, with what at first glance appeared to be a bit more generous portion of Thousand Island dressing on the generous portions of turkey and sauerkraut but which tasted fine and was all nicely balanced. We got a small portion of excellent mayonnaise-based potato salad on the side.

HOW IT WENT/HOW IT'S GOING: We dropped in to the open dining room and ordered off a board behind the counter. It took about 10 minutes for our sandwich to come out of the kitchen. There was one occupied table in the dining area and one to-go order being picked up as we arrived. 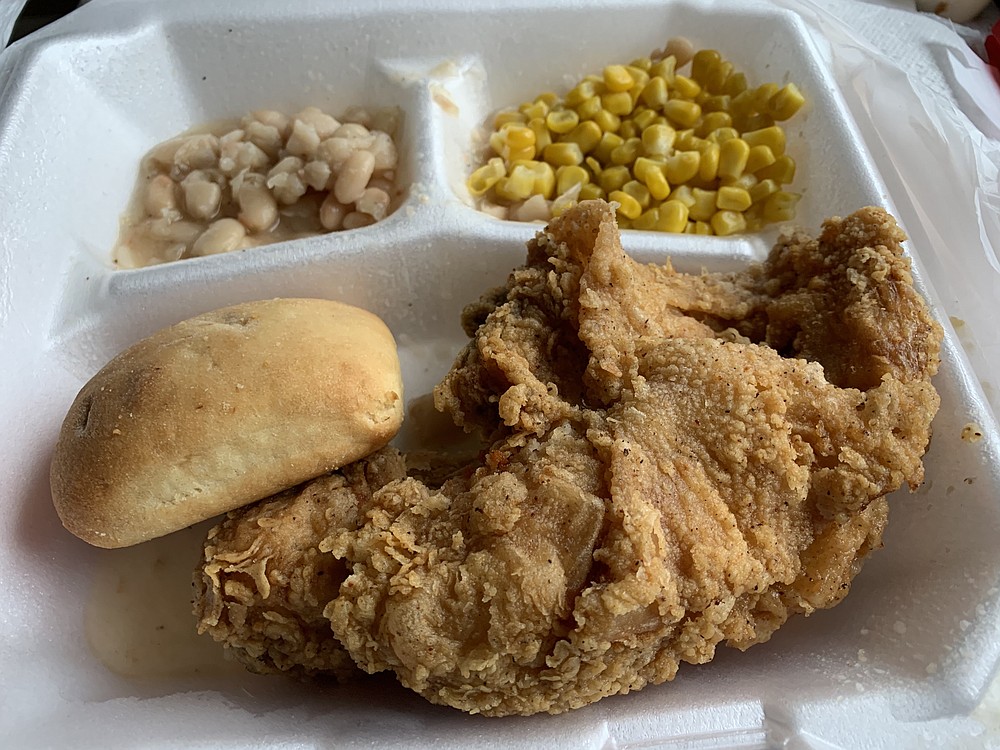 While namesake/owner/chef Flint Flenoy expands his reach, now also operating out of the former Flight Deck at Central Flying Service and the former Sack-It Grill in the Regions Bank Building, his "original" downtown location recently reopened in the Union Plaza, at Capitol Avenue and Louisiana Street. The menu offers breakfast items and burgers, but the main attraction has always been the meat-and-two-sides plate lunches. Flenoy brags about his fried chicken, and it's certainly worth ordering when it's on the line, as it was when we visited the other day (we chose it over the hamburger steak, which is also very good). We got two pieces, a leg and a breast, the latter being absolutely enormous, the chicken deliciously moist and the coating crisp and well drained. The great northern beans had sort of slopped over into the corn in the three-part foam clamshell, forming a sort of impromptu succotash, but we enjoyed that as well as if it had all been well separated. We got, as has been our custom here, a square dinner roll instead of corn bread, but not because the corn bread isn't usually excellent.

HOW IT WENT/HOW IT'S GOING: Late in the lunch period, there was one occupied table and we were the only to-go customers. So there was no wait.