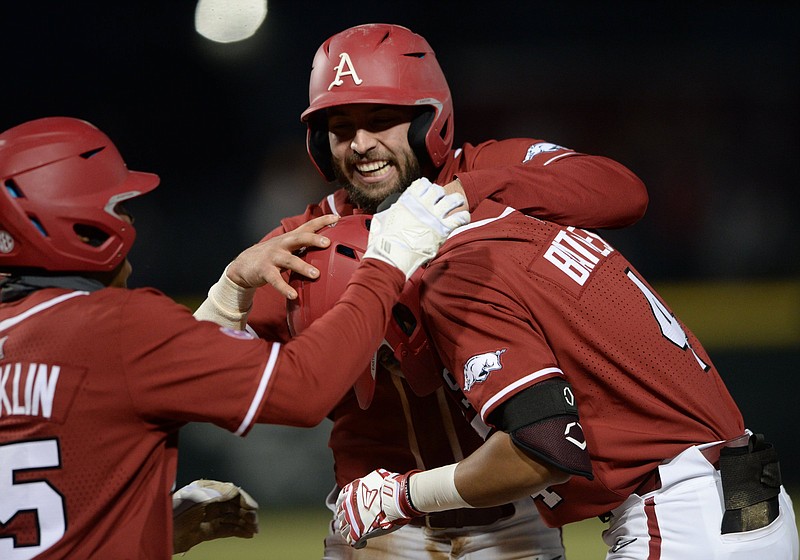 FAYETTEVILLE -- The No. 8 Arkansas Razorbacks stayed unbeaten in dramatic fashion in a chilly home opener on Thursday, rallying for three runs to tie Southeast Missouri State in the ninth inning, then walking off the Redhawks on Jalen Battles' bases-loaded infield single in the 10th.

The University of Arkansas (4-0) avoided losing its first home opener ever at Baum-Walker Stadium before a crowd of 4,218 and its first on campus opener since a 5-3 setback to Kansas on Feb. 18, 1994 at the old George Cole Field.

The Redhawks (2-2) jumped on Caleb Bolden for three runs in the first inning and could not hold their three-run ninth inning lead that would have rewarded an excellent start from left-hander Dylan Dodd.

The Razorbacks' late rally supported another sterling effort from the Arkansas bullpen, which opened with four strong innings from Patrick Wicklander and was capped by another strikeout-heavy power outing by freshman Jaxon Wiggins (1-0) in the 10th.

[Video not showing up above? Click here to watch » https://www.youtube.com/watch?v=B8lsNVg0l0Y]

"We figured it out with just a tremendous job by our bullpen ... giving us an opportunity to climb back in the game," said Arkansas Coach Dave Van Horn, who improved to 19-0 in home openers. "Just real proud of those guys. Hopefully the pitching staff will keep it rolling until we get our bats going."

Battles had RBI singles in the both the ninth and 10th innings, as Arkansas rallied late, just as it had in winning two of the three games in its sweep at the College Baseball Showdown last weekend.

"We always know we're never out of a game," Battles said.

"It's like anything else, once you've done it you get that experience and you can do it," Van Horn said. "We've done it a couple, two or three times now. Maybe not to this extreme, but we've been behind and fought back."

Casey Opitz started the 10th inning rally with a double to right field off Kyle Miller (0-1). After Cayden Wallace worked a 14-pitch walk, Zack Gregory was hit by a pitch from Blake Cisneros to load the bases.

Battle bounced a slow roller to the mound that Cisneros couldn't glove, and Opitz raced home before shortstop Tyler Wilber could make a play.

Opitz had three flyouts before opening the ninth with a single, then igniting the winning rally with his double .

"He's been clutch ever since he's been here so it didn't surprise me," Van Horn said.

Dodd held the Hogs to a pair of solo home runs by Christian Franklin and Brady Slavens while striking out 10 through six innings.

Arkansas trailed 5-2 entering the bottom of the ninth before mounting a weird comeback that included two critical replay reviews.

With former White County Central standout Austin Williams on the mound trying to close out a three-inning save, Opitz led off with a single but was erased on Wallace's fielder's choice. Gregory singled to right, then Battles stroked a single up the middle to score Wallace and cut Arkansas' deficit to 5-3.

"I was down two strikes," Battles said. "I was just trying to get the bat on the ball. It's really not how hard you hit it, it's just where you place it and that's what I did."

Robert Moore, the first hitter to face Miller, launched a towering shot to right field that appeared to hit the yellow padding on top of the wall, inches shy of a walk-off homer, before bouncing back onto the field. Because the runners had to hold up, no one scored and Moore had a long single to load the bases. Van Horn asked for a replay review and the umpiring crew confirmed the call on the field.

Franklin worked the count full and drew an RBI walk to make it 5-4, then Cullen Smith hit a fly ball to left field on which Battles tagged up and scored to tie the game.

SEMO Coach Andy Sawyers immediately had his players challenge the tag by Battles.

Bolden struggled to find his command three days after dominating Texas with seven strikeouts in a four-inning save.

Lead-off man Peyton Leeper worked a seven-pitch walk, then Bolden hit the three-hole hitter Wilber with a 2-2 pitch and Andrew Keck walked on a 3-2 count to load the bases.

Wicklander relieved and nearly got a strikeout of Danny Wright, but the catcher Opitz could not hang on to his two-strike foul tip. Wright then hit a run-scoring ground out to shortstop. The Redhawks plated their third run when Keck scored from third on a double steal and Arkansas failed to tag out the trail runner Wright.

Dodd, the reigning Ohio Valley Conference pitcher of the week, struck out six of the first 10 Arkansas batters. He had not allowed a hit until Franklin cracked a two-out home run into the Arkansas bullpen in the third inning.

The Razorbacks got another run back in the fourth when Slavens hit another solo shot, his second of the season, below the scoreboard in right-center field to make it 3-2 in the fourth.

The Redhawks tacked on two more runs against lefty Caden Monke in the eighth, snapping a streak of 19 1/3 scoreless innings by the Arkansas bullpen.

The Arkansas bullpen had thrown 19 2/3 scoreless innings, since Elijah Trest allowed a home run in the seventh inning of the season opener, before the Redhawks ended that streak with two runs in the eighth off Caden Monke. … Arkansas center fielder Christian Franklin just missed a second HR vs. Dylan Dodd on his fly ball to the warning track in deep center field as the last out of the fifth inning. … Saturday’s 3 p.m. game is scheduled to pit Arkansas RHP Peyton Pallette (0-0, 0.00) against SEMO RHP Ryan Vogt (0-0, 6.00). … The Razorbacks played their latest home opener since beating Northeastern (Okla.) State 2-0 on Feb. 28, 1976.