State virus tally back on rise; hospital cases up after drops 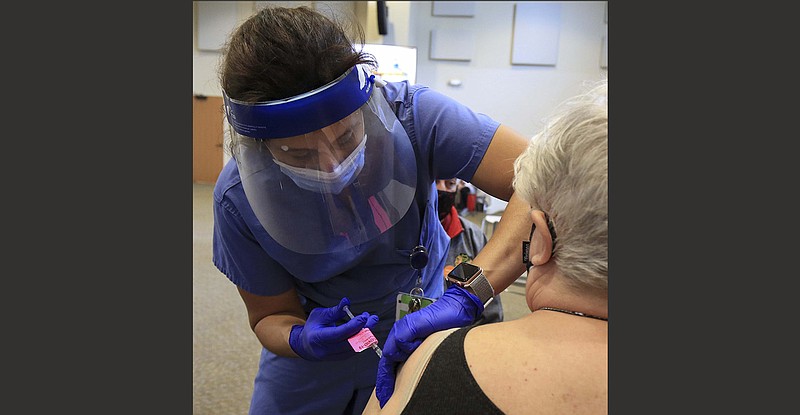 Nurse practitioner BarbaraMcDonald, left, gives Pauline Gerstein a covid vaccine shot Wednesday Feb. 25, 2021 at the UAMS vaccine clinic in Little Rock. Yesterday was the first day for the clinic to operate in its new location at the Centre at University Park at 6401 W. 12th Street.(Arkansas Democrat-Gazette/Staton Breidenthal)

Newly identified coronavirus infections in Arkansas continued to rebound from last week on Thursday as the tally of cases rose by 726.

The increase was smaller than the one the day before but was the third in a row that was larger than the one a week earlier, when testing was slowed by winter weather.

After falling the previous two days, the number of people hospitalized in Arkansas with covid-19 rose Thursday by 26, to 522.

The state death toll from the virus, as tracked by the Department of Health, rose by 10, to 5,397.

Also Thursday, the state Department of Corrections announced that it will resume a visitation pilot project on March 6 that was suspended in December as prisons went on "lockdown" in response to an increase in cases among staff members and in the community.

Meanwhile, Gov. Asa Hutchinson's office said he will make a "significant announcement" today on the state of the covid-19 public health emergency that he first declared last March.

He also will "provide an update regarding COVID-19 directives in Arkansas," according to a media advisory.

Hutchinson said earlier this week that he would extend the emergency declaration this week before it expires on Saturday.

Hutchinson also is scheduled this afternoon to visit a drive-thru vaccination clinic in Lowell where 3,000 people are expected to receive initial doses of the Moderna vaccine.

A state official has said the event, organized by the Northwest Arkansas Council, could serve as a model for other large vaccination clinics.

"I am going to the clinic in order to thank the community organizers, to see the effectiveness of the vaccine administration, and learn best practices for more clinics around the state," Hutchinson said in a statement.

"I also want to use the appearance as a means to encourage everyone to get the vaccine when it is their turn."

The council is a business group that includes Walmart, J.B. Hunt and Tyson Foods.

Statewide, the number of virus patients on ventilators rose for the second-straight day, from 100 on Wednesday to 108.

After an increase a day earlier, the number of virus patients in intensive care units as of 2 p.m. fell by nine, to 203.

The visits must be for immediate family members and are by appointment only.

"We felt like we needed to work on using this new system on a limited basis before we expanded," she said.

On Wednesday, she said the prison system had just 21 active cases among inmates, which she said is the lowest number she's seen since starting work at the department in May.

On Thursday, that number rose to 48 as 44 new cases were identified and other inmates were classified as having recovered.

Thursday's increase in cases followed rises of 834 on Tuesday and 803 on Wednesday.

It was almost three times as many cases as the 253 that were added the previous Thursday, Feb. 18, when many testing sites were closed by snow.

"I think we're catching up with the cases that didn't get done during the inclement weather," state Epidemiologist Jennifer Dillaha said.

She said she was hopeful that the daily case increases soon will resume the general downward trend they began after peaking in early January.

One reason: She said 7.2% of the polymerase chain reaction, or PCR, tests and antigen tests that were performed over the past 14 days were positive.

That's below the target of 10% and lower than it has been in the past, when the daily case increases were larger.

"So that tells me that the overall trend is that we're proportionately not missing a lot of cases," she said.

She noted the increase in hospitalizations followed a drop of 49 a day earlier.

"I don't like seeing them go up, but the day-to-day fluctuation is not so unusual since we had such a decrease yesterday," she said.

Likewise, she said the increase in the number of patients on ventilators was "not especially alarming at this point."

The Northwest Arkansas Council's vaccination event, at J.B. Hunt's headquarters in Lowell, is expected to be the state's largest one-day vaccination clinic so far.

It could be topped, however, by an event planned for March 6 at Arkansas State University's First National Bank Arena in Jonesboro.

Shane Speights, dean of the New York Institute of Technology College of Osteopathic Medicine at ASU, said organizers are hoping to give initial shots to about 3,500 people.

He said providers had been discussing plans for a large event for weeks, but it only recently became possible, as the weekly state allotment of vaccine doses from the federal government has increased.

"We're really kind of racing the clock on this," Speights said, citing more contagious variants of the coronavirus that have been identified in most other states.

"Having events like this are really pivotal to be able to get to that end goal of a higher number of vaccinated individuals," he said.

In Northwest Arkansas, state officials asked the Northwest Arkansas Council for help in increasing the number of Benton County residents age 70 and older who have received vaccinations, as well as in developing a model for a mass vaccination event, Ryan Cork, executive director of the council's health care transformation division, said.

"For us, the advantages are the human capital side," Cork said of having a large one-day event versus an ongoing clinic.

"We're able to have 250-plus volunteers that signed up for a one-day, eight-hour event in lieu of trying to get volunteers for 40 hours a week."

He said Bella Vista used a city alert system to let residents know about the event, and participating providers also helped spread the word to their patients.

Organizers set aside 13%-15% of the appointments for eligible members of the county's Hispanic and Marshallese populations, he said.

Patients should be able to drive through the various stations and get their shots within five minutes, he said.

Several other organizations were listed as participating.

At both the Jonesboro and Lowell events, neither patients nor their insurance will be charged, organizers said.

With the paperwork that would be involved, "that's actually a piece that we recognize could actually slow down the process," Speights said.

At a church in Searcy, Unity Health-White County Medical Center on Thursday wrapped up a two-day clinic with the Arkansas Foundation for Medical Care that provided initial vaccine doses for about 1,200 people age 65 and older, Erica Duncan, a hospital spokeswoman, said.

She said the hospital encouraged people to make appointments. But unlike at most clinics, they weren't required.

Meanwhile, UAMS on Thursday held its first vaccination clinic at its new site, the Centre at University Park in Little Rock, where it administered shots to 248 people.

UAMS spokeswoman Leslie Taylor said the university can vaccinate up to 1,000 people at the clinic, up from about 350 a day at the former site at the Freeway Medical Tower, but only has enough vaccine for about 500 shots per day.

Little Rock is providing the new space without charge, she said.

"This new space is also ground level with easy parking and easy entry and exit from the facility," Taylor said in an email.

"Many couples are coming in to the clinic together and we are vaccinating them at the same time/same station so they can wait together after their vaccine."

She said the university also is using a mobile unit to hold about two clinics a week at different places around the state.

According to the Health Department, pharmacies and other providers participating in the vaccination effort coordinated by the state had received 835,590 doses as of Thursday morning, up by 18,860 from the total as of a day earlier.

In addition, the Health Department said Walmart, Walgreens, CVS and pharmacies belonging to the Community Pharmacy Enhanced Services Network had administered 38,481 doses that were allotted through federal programs.

That was an increase of 2,922 from the total as of a day earlier.

Walgreens and CVS were allocated 49,400 doses of the Moderna vaccine for residents and workers in Arkansas long-term care facilities as part of a federal program.

Dillaha said Thursday that the state also is reclaiming 1,000 of the unused doses from CVS that will be targeted toward vaccinations of Hispanic and Marshallese people in Washington County.

Walmart was allocated 11,600 doses for vaccinations that began Feb. 13 at 58 stores as part of a different federal program.

The cases that were added to state tallies included 574 confirmed through PCR tests.

The other 152 were "probable" cases, which include those identified through antigen tests.

After falling for more than two weeks, the number of cases that were considered active rose by 44, to 4,720, as 672 Arkansans were newly classified as having recovered.

Among prison and jail inmates, the Health Department's count of cases rose by 29.

Murphy said the number of cases among inmates rose by 17, to 842, at the Varner Unit in Lincoln County; by 16, to 1,580, at the Ouachita River Unit in Malvern; by six, to 233, at Omega Supervision Sanction Center in Malvern; and by five, to 87, at the East Central Arkansas Community Correction Center in West Memphis.

Among nursing home and assisted-living facility residents, the count of virus deaths rose by four, to 2,022.

The number of people who have ever been hospitalized in the state with the virus grew by 65, to 14,714.

The number of virus patients who have ever been on a ventilator rose by seven, to 1,516.