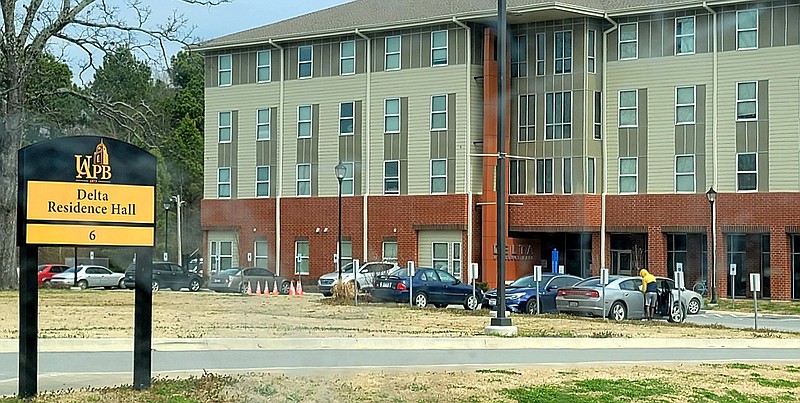 Some students of the Delta Housing Complex moved back into their residency on their own after telling campus officials that their units were working. (Pine Bluff Commercial/Eplunus Colvin)

Editor's note: This is part one of a two-part series

University of Arkansas at Pine Blueff Chancellor Laurence Alexander and executive cabinet members talked virtually and frankly to students, parents and alumni this week, explaining to them how, because of a citywide water crisis, students have suddenly found themselves living in hotels in Pine Bluff, Little Rock and elsewhere.

Several updates were provided by the panel, and rumors were also addressed concerning the meals the students are receiving at the hotels and whether some students are still living on campus.

The Zoom meetings were held at 1, 5, 6:30 and 8 p.m. on Wednesday to provide transparency, which the panel said would continue throughout the crisis.

Each meeting began the same way, with Alexander thanking each group for their diligence, perseverance and patience during this crisis.

"This is the most difficult and historic time in our university's history," said Alexander, who added that in the middle of a pandemic, Pine Bluff accumulated near-record snow totals.

Alexander went on to tell those in attendance how Liberty Utilities was not forthcoming with information and how he was not expecting the students to be displaced for the amount of time that they have been.

"Immediately after that snowstorm we got word that there were some malfunctions at Liberty Utilities, our water provider," said Alexander. "Liberty Utilities had some problems, and we all suffered as a result."

Alexander said university officials then began to get reports from staff on the ground that they were experiencing severe water pressure shortages, to the extent that they could not flush their toilets and could not practice the usual standard of hygiene.

After a day of misinformation and realizing that this issue was happening throughout the entire city of Pine Bluff, Alexander said a decision was made to focus on the safety of the students.

As time went on and more information started coming out about the leaks throughout the city, Alexander said he received more information from Liberty Utilities that they had no idea how long this was going to last.

"We ask them that question repeatedly, 'How long was this going to last? What's the worst that we are looking at?'' Alexander said. "But the executives could not answer that question."

Liberty officials have blamed the low water pressure problems on the many days of subfreezing temperatures that caused pipes to leak and burst. Businesses and Jefferson Regional Medical Center have been hampered in their ability to carry on in a normal fashion, with some residents saying they have no water or very little water at all. As of Wednesday, however, things have started to improve in some areas of town.

The decision to move the students was made when the majority of the staff was snowed in at their homes. With the few staff members that were around, Alexander said they pulled together and did what they could do at that moment.

Elbert Bennett, vice chancellor for student affairs, said some students were still living on campus, and, despite the rumors, it was by choice.

"We did not force any students to stay on campus," said Bennett. "We asked all students to leave. It was not optional. A couple of students stayed who said their facility was working properly."

Bennett said the students that lived in the Delta Complex did not have the same issues with the toilets that were happening in the other areas because the Delta Complex has tanks that fill up. That process was slow, but it worked.

"The rest of the campus are water-pressured facilities that take more power and more water to empty the toilets," said Bennett. "Delta housing complex units work just like the units in our home, and we did permit students to stay in those rooms, but if they were having problems we would relocate them."

Bennett said some students have moved back into their rooms on their own, which was discovered during a room check.

"We had 14 additional students in the [Johnny B. Johnson] and the Delta Housing Complex that moved back into the facility and their response was, 'Our facilities are working. We want to stay.'"

Despite that, Bennett said the school is not going to move students back on campus until school officials get a clearance to move back.

"When students come back unbeknownst to us, we don't know," he said. "They just come back because they still have their room key."

For the students residing in the hotels, food has been an issue as their meals aren't what they are used to getting compared to on-campus dining. Students are receiving three meals a day, but those meals include a continental breakfast and box lunches for dinner and lunch.

"We understand their frustrations as it relates to the food that the students have been receiving," said Carla Martin, vice chancellor for finance and administration.

"We have worked with UAPB dining so that the individuals that are in the Little Rock, White Hall or Pine Bluff hotels are being able to receive meals from their food service provider," Martin said.

Breakfast includes cereal, milk, granola, fruit, a danish and water. For lunch, the students receive two sandwiches or two wraps or a combination of the two with chips, cheese crackers, cookies, a granola bar and soup. Dinner is identical.

"I don't know how Jared was able to eat Subway every single day for a year but he did," said Martin. "We're asking that you journey with us as we navigate these issues and join Jared and eat these boxed lunches and box meals for just a little bit longer."

Martin explained the reason for the box lunches was to ensure food quality and prevent any food-related illnesses.

"Many individuals have asked, 'Where are the hot meals?'" she said. "By the time we box 340-something meals, load them into a vehicle or a bus, drive them by bus to Little Rock and unload them at different locations, we are outside of the parameters for food guidance and the abilities to keep food warm."

Martin said school officials are still having conversations as to whether there might be other alternatives for feeding the students, but due to Centers for Disease Control and Prevention guidelines, the inability to gather together is preventing the university from being able to rent out a banquet hall and come in and serve a hot meal.

"We are trying to be creative and think outside of the box," said Martin. "We are going to move to include pizzas, hot pockets, ramen noodles and other things that can be warmed up at the hotels. I know it is less than ideal, but we all know this entire situation is less than ideal."

Part two of this two-part series will address academics and university support offered to UAPB students and the response from students, parents and alumni.