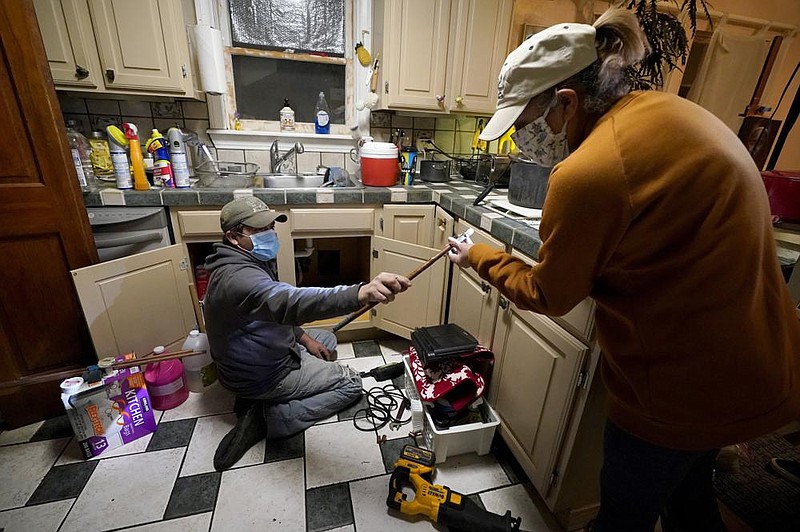 As water pressures from all three Liberty Utilities plants in Pine Bluff increase, the flow has been stabilized across the city, officials said during Thursday evening's incident command meeting.

Plant 2 on 28th Avenue, which was segmented to increase the pressure going into Jefferson Regional Medical Center earlier in the week, is pumping out water at 70.7 pounds psi, but Liberty officials say the plant is back operating in concert with the other two plants now.

"Our pressures are so good, we're undoing that process," said Mike Beatty, Liberty water and gas vice president. "We're not just turning all the valves back on, we're doing them one at a time and making sure the hospital's staying good. The pressure is good all over the system, so we feel pretty good about our process of undoing the segmentation."

Danny Holcomb, facilities director at Jefferson Regional, said water has flowed into the hospital at 58 psi. Normal pressure is between 50 and 60 psi.

"We're back at full operation," Holcomb said. "We were having to constantly add water to [tanks] to make sure they didn't run dry. Our sterilization operations before we do surgery, we couldn't operate any of those until after the pressure got above 44, 45 psi. ... If we're anywhere near 50 and 60 pounds of pressure, we can do anything we need to do here."

Plant 1 on Fifth Avenue is pumping at 56.9 psi and Plant 3 on Industrial Drive is operating at 52.7 psi. The follow-up bacteria sample from Plant 1 came back clean, allowing Liberty bring online refurbished filters without the risk of a boil order.

Water is flowing into the campus freely at the University of Arkansas at Pine Bluff, according to the Liberty executives. Many residential students have been staying in hotels in Little Rock and Pine Bluff as Liberty works with campus leaders to fix leaks and resolve the university's boiler and sanitation system problems resulting from the weakened water pressure during the Feb. 14-17 snowstorm and frigid weather.

Beatty said UAPB officials asked to have the water meters turned back on.

"They do have some leaks on their side, and their actively repairing, but it sounds like they're actively good," Beatty said. "Their focus, from what I understand, is their dormitories and their cafeteria."

But when asked whether Liberty's pressures are up to par, utility President David Swain said: "From Liberty's standpoint, we're there."

Pine Bluff, Dollarway and Watson Chapel school districts, however, are electing to continue with virtual learning today, exercising caution against overusing a water system that produced at a 14.7-million-gallon-per-day rate Thursday, higher than usual for this time of year. Swain attributed that rate to Tyson Foods operating at 75% capacity, to which community leaders did not object.

"We've got good pressure in our office, but if 1,500 kids try to come on campus and flush the toilets, I'm not sure the schools can handle that," Watson Chapel schools Superintendent Jerry Guess said.

Beatty said the schools "should be in good shape," now that the pressures are stabilized.