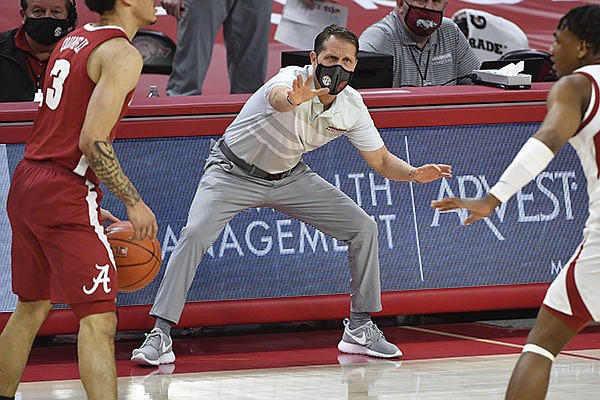 Arkansas coach Eric Musselman reacts to a play against Alabama during the first half of an NCAA college basketball game in Fayetteville, Ark. Wednesday, Feb. 24, 2021. (AP Photo/Michael Woods)

FAYETTEVILLE -- After the University of Arkansas basketball team beat No. 6 Alabama 81-66 on Wednesday night, Coach Eric Musselman was asked whether his Razorbacks' eighth consecutive SEC victory had clinched an NCAA Tournament bid.

Musselman didn't want to even discuss it.

"I think we still feel that we have something to prove," Arkansas senior forward Justin Smith said. "We're just a hungry group. We haven't really been complacent throughout this stretch. There's still more we want to get done."

ESPN analyst Dick Vitale, arguably the loudest voice in college basketball, tweeted congratulations to Arkansas after the Alabama game and said Musselman must be on Cloud 9.

The Razorbacks continue to climb in NCAA Tournament bracket projections, up to a No. 3 seed by Jerry Palm of CBS Sports and a No. 5 seed by ESPN's Joe Lunardi.

"We've got LSU next game," Arkansas freshman guard Moses Moody said after scoring 24 points against Alabama. "So we're going to get on that scout and just stay locked in."

"It's moment by moment as far as the bracketology," Musselman said. "The amount of time, effort and energy that I spend on it is zero.

"We got fortunate the first time," Tigers Coach Will Wade said. "I know you look at the final score and stuff, but they missed some layups ... they missed some wide-open threes. They didn't have Justin Smith.

"This one will be vastly different from that game."

Smith, Arkansas' best rebounder and interior defender, watched the first LSU game from home as he continued to recover from ankle surgery that sidelined him for four games.

"Watching that game, I was frustrated because I was close to coming back," Smith said. "In my mind I had wanted to make that game the day that I came back, but the way that my rehab was going and everything, that wasn't going to be the case.

"But I'm excited to play this game. We're looking forward to it and hopefully we can avenge what happened earlier this season."

Arkansas avenged a 90-59 loss at Alabama that occurred the game after being blown out at LSU.

The day after losing to LSU, Musselman held a lengthy practice that he called the toughest in his two seasons at Arkansas. The Razorbacks wore weighted vests like they would in a training camp practice.

"I think defensively they're much improved," Wade said. "They follow the scouting report and follow the direction of the coaches, and taking away the other team's strengths is something they're doing better than anybody in our league.

"I think they're playing with unbelievable belief, unbelievable confidence, and it's a credit to Coach Musselman and his staff."

Wade lauded the job the Razorbacks have done bouncing back from their back-to-back road losses against LSU and Alabama.

"You start staggering like that, it's not easy to recover," Wade said. "Arkansas has done a phenomenal, phenomenal job of recovering. I guess that weight vest practice worked.

Freshman forward Jaylin Williams, whose physical play inside has been a key in Arkansas' SEC winning streak, said it's nice to hear praise for the Razorbacks and about their NCAA Tournament projections.

"I mean, of course it's in all of our heads, but we're ready for the next game," Williams said. "We're thinking about LSU. We're ready to play them and ready to see what happens next."

Musselman said the Razorbacks can't afford to look ahead -- at all.

" I mean, I'll be honest with you, I'm still worried about how do we get in the NCAA Tournament," Musselman said. "That's literally my No. 1 concern.

"Crazy stuff happens. Our goal is to try to win the next game on our schedule. That's the most important thing."