LEGEND OF BASS REEVES: Black lawman a star in France 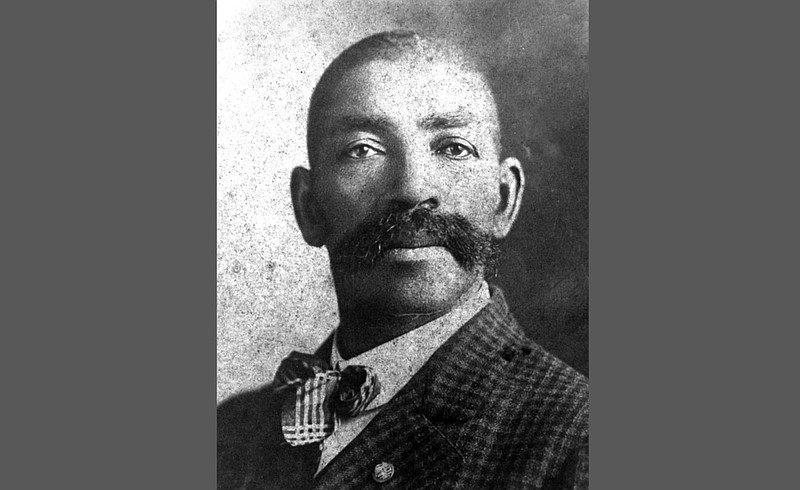 Settlers around Fort Smith said Bass Reeves, shown in this undated photo, “could whip any two men with his bare hands,” according to the Encyclopedia of Arkansas. (Special to the Democrat-Gazette)

It was time for a Black cowboy hero in the venerable Franco-Belgian comic book series Lucky Luke.

But the author, Julien Berjeaut, didn't have a real-life model in mind.

"I was about to make up a fictional character when Achde, the graphic artist of this comic book, found out about Bass Reeves," Berjeaut said in an email. "It was almost too perfect: his ability, his sense of law and justice, and even his outlook seemed ideal for us!"

Born a slave in Crawford County, Bass Reeves became a deputy U.S. marshal in Fort Smith in 1875, making him one of the first Black federal lawmen west of the Mississippi River.

"He could shoot a pistol or rifle accurately with his right or left hand," according to the Encyclopedia of Arkansas. "Settlers said Reeves could whip any two men with his bare hands."

Reeves became a legend for his ability to catch criminals under trying circumstances, according to the encyclopedia entry. He escorted fugitives by the dozen into the Fort Smith federal jail.

"As a cartoon character, having such a Groucho Marx moustache, his large hat and long overcoat, it was a gift, everything was here already," said Berjeaut, who lives in Paris and goes by the professional name Jul.

The character of Lucky Luke is a white cowboy in the American Old West. He is "the man who shoots faster than his own shadow," according to the series creator, who went by the mononym Morris.

Millions of children in Europe read the Lucky Luke comic books at an impressionable age. In the nearly 80 books published in the seven-decade history of Lucky Luke, there had only been one Black character, in a comic book titled "Going Up the Mississippi."

Berjeaut said he took over the Lucky Luke series seven years ago and thoroughly read the nearly 80 already published "albums," referring to comic books. The first 30 albums issued in France were paperback, and the rest were published in hardcover there.

"I really wondered why these two fundamental identities had been wiped off, and decided to cope with those fraught issues," he said. "I knew it was something quite bold at the time, but I felt time had come to do it."

Berjeaut first published "The Promised Land," a story where Lucky Luke escorts an Orthodox Jewish family to the West. Then came "A Cowboy in Paris," in which Lucky Luke is commissioned by the U.S. government to escort the Statue of Liberty from Paris to New York.

Next was "A Cowboy in High Cotton," which was published in French late last year and in English this month. Reeves is the hero of this book. He saves Lucky Luke and others who are about to be set ablaze by the Ku Klux Klan in Louisiana.

"This story was special in a sense that it dealt with the aftermath of slavery and the tragedy of Black condition at the time, but still had to remain a comedy, suitable for children and adults as well," said Berjeaut. "This challenge took me four years of research and writing."

"My story requested a strong black character to ride along with our famous hero," he said. "A traditional Lucky Luke story implies a situation, being saved by the fastest cowboy in the West. This time it couldn't go this way. First, I wanted to be faithful with history, and it wouldn't have been honest to have a single person solve by himself the issue of racism and violence in the Deep South. And I didn't want Lucky Luke to embody a 'white savior.' I needed to have someone as powerful and more aware of codes and behaviors of post-slavery Louisiana plantations."

On the first page of "A Cowboy in High Cotton," Reeves has captured the Dalton gang and he stops by a Kansas saloon to let one of them use the "privy." There, Reeves bumps into his old buddy Lucky Luke.

Shortly afterward, Luke inherits a Louisiana plantation and heads south to divvy up the land and give it to the former slaves, who are still working there and not getting paid.

One thing leads to another, and Luke is eventually captured by the Klan. Just before they set him on fire, Reeves arrives and shoots through the ropes that bind Luke to a pole. As the outnumbered heroes are trying to fight off a large number of Klansmen, a hurricane sweeps through, "and once it's passed the land is barely recognizable ... all references scrambled."

In the next cartoon frame, a Black couple sees a basket floating in a river. Inside are two babies, one Black and one white.

"That's our Moses all right," says the Black man. "But who's the other one?"

Luke is looking for Bass.

"Last time I saw him, he was flying over the church astride an alligator," says Luke's horse, Jolly Jumper.

Bass emerges from the swamp with a dead gator over his shoulder.

"It'll make a fine purse for my wife," he says. "She hates it when I leave on business, so I always bring her back a present."

Some of the former slaves decide to head West. Others remain on the former plantation, with plans to rebuild the school.

"A Cowboy in High Cotton" met with some criticism, coming at a time when France is wrestling with issues of race, police brutality and colonialism.

The right-wing magazine L'Incorrect wrote in French: "It was the event of December 2020, a new Lucky Luke album for a certified politically correct Christmas, courtesy of screenwriter Jul and cartoonist Achde, who had just prostituted the lonely cowboy to the obsessions of time. ... The argument underlying this album is typical of American neo-progressivism."

Berjeaut said the backlash was to be expected.

"Quite like in the U.S., but with the usual European delay, France has started to confront its colonial history, and the difficult racism issue," he said. "Historians and activists have been shaking society a lot in the past years, and there is a brutal reaction in some marginal parts of conservative society. When it comes to sacred and patrimonial characters like Lucky Luke, some are being offended in their feeling of supremacy. But its a minor part of the reaction, since the album has been widely praised by the media, and was an unprecedented commercial success."

Berjeaut said more than 300 million copies of Lucky Luke books have been sold since it was created. He said "A Cowboy in High Cotton" is nearing 500,000 in sales in France after only three months.

"Four generations have been reading Lucky Luke continuously ever since 1946 and it's still the top bestselling in France," he said. "Ninety-eight percent of the people know this character. All Europe reads it. In Germany we sell almost as well as in France. But even out of Europe, it's quite a hit."

Philippe Reichert, 66, who was raised in French-speaking Algiers and lives in Tahiti, said Lucky Luke instilled in him a fascination for the United States. He made more than 10 trips to the U.S. between 2006 and 2017.

"I've always been a fan of comic books," said Reichert, a retired teacher. "I learned to read with them. My favorites were Tintin, Spirou and Lucky Luke. Later on I discovered Mad Magazine. ... We didn't have access to the American comics when I was a kid, so it was an important discovery for me. These readings (and the movies ... and the music) were definitely a reason of my attraction to the USA."

Reichert said he was a fan of Lucky Luke in particular when Rene Goscinny was writing it, but Goscinny died in 1977.

"He loved the USA and particularly the history of the Wild West," said Reichert. "He was inspired by characters like Calamity Jane and Billy the Kid."

Reichert said Lucky Luke lost some luster after the passing of Goscinny, but Berjeaut is reinvigorating the series.

"Jul is very talented," said Reichert. "I know his work. I like what he is doing."

Much of America is just now discovering Bass Reeves. He has been featured in books, films and in three comic books published by Allegiance Arts & Entertainment of Little Rock.

Kennedy said he's been getting calls lately from people all over the country who think Reeves may be their ancestor.

"It is very very difficult to tie yourself back to Bass Reeves," said Kennedy. "We don't know if there's a direct descendant."

Kennedy said the museum, which has yet to open, has three rifles, four pistols and a pocket watch that are thought to have belonged to Reeves.

While still raising funds, a grand opening of the museum is tentatively planned for 2022.

"The only place these men could have seen success like this in the country during in the 1870s, '80s, '90s, was Fort Smith, Indian Territory and Oklahoma Territory," Kennedy said during his Facebook talk.

During that time, many white people would have considered it an affront to be arrested by a Black deputy.

"Quite honestly, there was a short life expectancy for a lot of the deputies."

The last page of "A Cowboy in High Cotton" is a tribute to Bass Reeves.

"It was the best kept secret about the Old West, and for a long time no one listened to those who knew: 25 percent of cowboys were Black (and a large number of their colleagues were Latino!)," it reads. "Hollywood Westerns have always hidden that history by building the legend of the blond, blue-eyed cowboy, yet it was a difficult, poorly considered profession that paid on average a single dollar a day.

"Among those forgotten names, Bass Reeves holds a unique and important place: first Black deputy U.S. Marshal west of the Mississippi River, born into a slave family, he arrested more than 3,000 outlaws over his heroic career. A crack shot and incorruptible defender of the law, he embodies the most legendary aspects of the Old West." 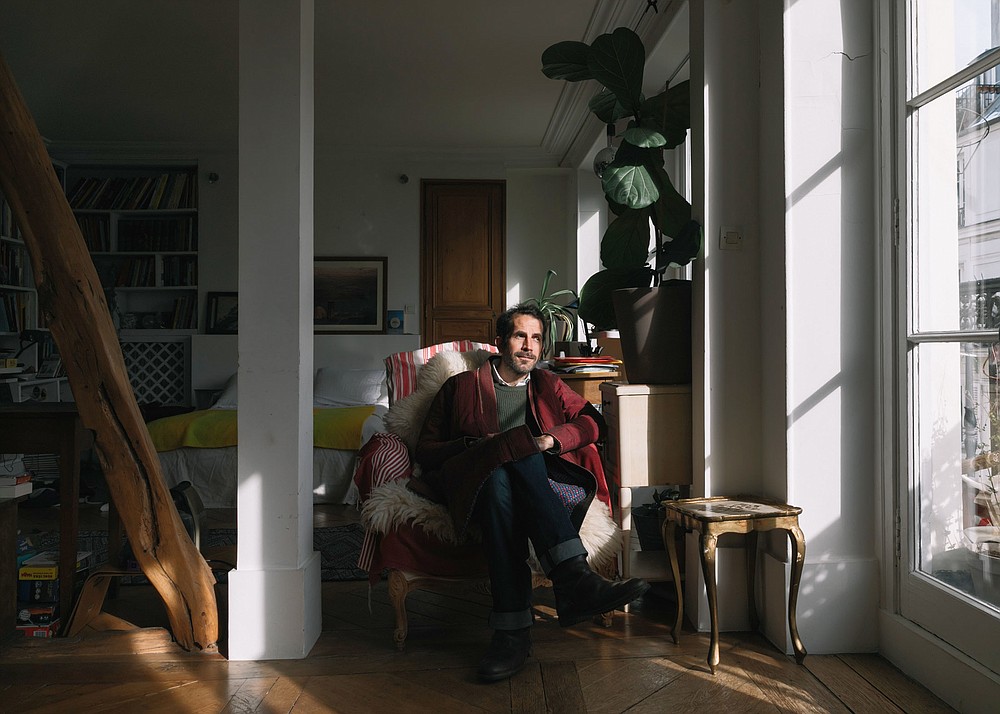 Cartoonist Julien Berjeaut said the challenge of incorporating the aftermath of slavery and the ordeal that Black people were going through took four years of research and writing. The story “had to remain a comedy, suitable for children and adults as well,” he said. (The New York Times/Andrea Mantovan) 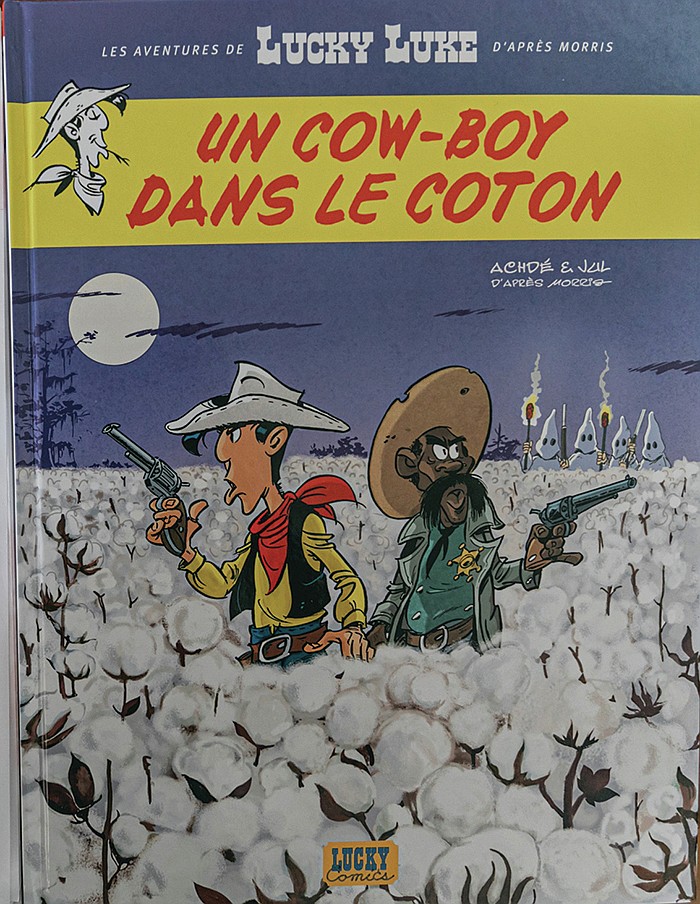