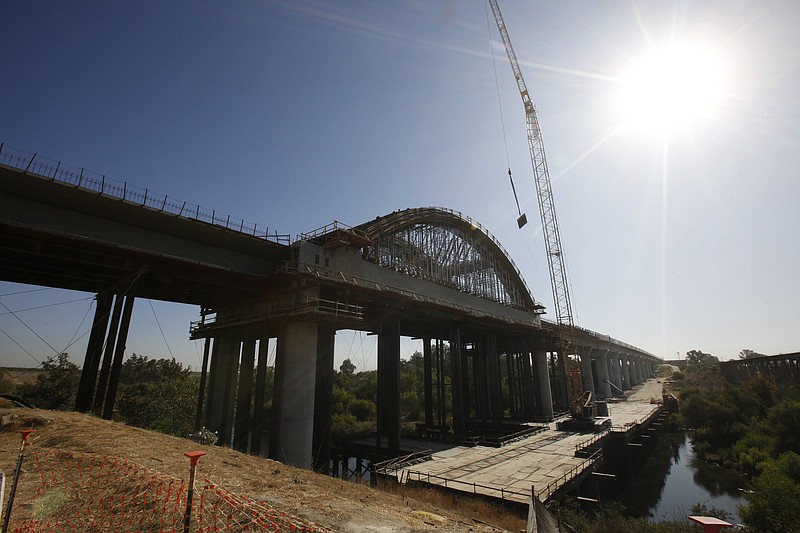 FILE - This Oct. 9, 2019, file photo shows the high speed rail viaduct under construction over the San Joaquin River near Fresno, Calif. A letter from a major contractor blames the state for delays in building California's bullet train, contradicting claims that the line's construction pace is on target and warning the project could miss a key 2022 federal deadline, according to a newspaper report Tuesday, Jan. 12, 2021. (AP Photo/Rich Pedroncelli, File)

LOS ANGELES — A 65-mile section of California’s bullet train through the San Joaquin Valley that a contractor assured could be constructed much more cheaply — with radical design changes — has become another troubling and costly chapter in the high-speed rail project, a Los Angeles Times investigation found.

The segment runs across rivers, migratory paths for endangered species and an ancient lake bed through the length of Kings County, a fertile agricultural belt south of Fresno. Before awarding a contract for the section, the California High-Speed Rail Authority and its consultants knew about these sensitive issues and prepared lengthy environmental reports aimed at accelerating construction by avoiding legal obstacles.

But in 2014, when the rail authority awarded the contract, it went with the lowest bidder — a Spanish company named Dragados — which promised $300 million in cost savings by altering the design that the authority had proposed to regulators.

Seven years later, these changes have been largely abandoned and have contributed to more than $800 million in cost overruns on the Kings County segment. That figure is 62% above the contract price tag, which the rail authority has agreed to pay, according to interviews and technical and contractual documents reviewed by the Times.

In addition, the rail authority awarded the contract without completing a scientific assessment of how sinking land in the area — a result of decades of excess groundwater pumping — could affect the rail route. California is now paying tens of millions of dollars to raise track embankments over 21 miles.

In a statement, the California High-Speed Rail Authority said it is working with regulatory agencies to resolve design issues. The agency declined to make top officials available to answer questions but asserts it is making good progress on completing an initial 171-mile line through the San Joaquin Valley, which includes the Kings County section. It also said it was not required to finalize the study on land subsidence before construction began in 2015.

“We continue to apply lessons learned to our current and future work to ensure issues of the past do not repeat themselves,” the authority said, adding that in the past two years, the state agency has established 35 active construction sites across 119 miles of the Central Valley.

Officials for Dragados — which has extensive bullet train experience across Europe but less of a track record in California — did not respond to requests for comment, saying they are “required to coordinate responses to media questions” with the state.

Some experts say this marks yet another black eye for the project that has been beset by cost overruns and delays that now threaten it. The price tag of the massive project to build a Los Angeles-to-San Francisco high-speed rail system has shot up from an original estimate in 2008 of $33 billion with service starting in 2020 to at least $100 billion with an uncertain start date.

“The rail authority should have been concerned about the low bid,” said William Ibbs, a University of California, Berkeley professor of civil engineering who has consulted around the world on high-speed rail projects. “The devil is always in the details.” When the rail authority launched the Kings County work, Obama administration officials were exerting “immense pressure,” in the words of one former rail authority official, to get construction moving, even though it had fewer than 30 employees and was dependent on consultants. Four years earlier, the federal government had issued grants for what was supposed to be a “shovel ready” public works project, the nation’s largest.

Today, Dragados has not started construction on about half its bridges and viaducts, four years after the original deadline of 2017, and it had completed less than 50% of its planned work by December, according to rail authority progress reports. The rail authority bears a share of responsibility, having failed to deliver 278 of 998 parcel land purchases needed for construction.

But numerous change orders — which include design revisions sought partly by Dragados — are a large part of the problem.

The Times’ review found that California has approved 273 change orders for the Spanish contractor — about one every week since mid-2015. These changes covered items that included extra insurance premiums, delay costs, route changes and land shortages, adding up to more than $800 million.

“It is not like a single project, but a lot of projects strung over a distance,” said USC civil engineering professor Gregg Brandow, who was asked by the Times about the process. “Even then, it seems like a lot of change orders,” he added, terming the cost increases “extravagant.” The rail authority, however, said it found nothing of concern about Dragados’ significantly lower bid, citing “a public, transparent, multi-year two-step process that was approved by the board of directors.” California’s high-speed rail endeavor still has support from Gov. Gavin Newsom and other state leaders, who hope it will ultimately relieve congested airports, spur economic development in the Central Valley and provide a cleaner alternative for linking the Bay Area, the Central Valley and Southern California.

But with continued cost increases and delays, the project potentially could run out of money before an initial 171-mile line from Merced to Bakersfield is completed. The Dragados segment, which is part of that initial line, is just part of the problem.

Two other construction teams have filed their own massive change orders. Far more land than ever imagined is needed in the Central Valley, and it is coming at a higher cost. Consultants have racked up hundreds of millions of dollars in higher costs to develop environmental statements. Relocating underground utilities has proved more complex than expected.

When California selected Dragados in 2014, the $1.2 billion contract was the rail authority’s largest ever, but it was $506 million less than the next-lowest bidder, Tutor Perini, and $834 million less than the third bidder, Samsung. The exact bid number — $1,234,567,890 — was considered cheeky in the no-nonsense construction industry with its sequence of all 10 numerals.

At the time, rail authority Chief Executive Jeff Morales heralded the low price tag as a “significant milestone.” Others, however, say the wide gap among the bids should have been a red flag.

“Tutor Perini bid a half-billion dollars more and it was already working on the project,” said UC Berkeley’s Ibbs. “So they knew more about it and had more experience in California construction.” In its bid, Dragados proposed fundamental changes to what the authority’s environmental consultants — URS, Hatch Mott MacDonald and Arup — had envisioned in Kings County, with its complicated landscape of creek beds, wildlife habitats, roads and other infrastructure.

To avoid potential conflicts, the authority’s consultants proposed building the rail line on an elevated platform as it entered a future train station south of Han-ford. But Dragados — offering up “alternative technical concepts” and “design refinements” — proposed constructing the rail station and adjacent line on ground level. The change was supposed to save $130 million.

Yet the Spanish firm underestimated the challenges, records show and project officials say. These included moving a nearby four-lane freeway into a trench and rerouting track owned by Union Pacific Railroad. The freeway trench was far more complex than expected. No agreement was reached with the railroad. The California Department of Fish and Wildlife was opposed, according to two officials knowledgeable about the matter who asked to remain anonymous because they were not authorized to talk to the media.

Dragados also said its plan would save $79 million by replacing a proposed 2-mile viaduct over a network of waterways of the Kings River with 13 box culverts. And it proposed saving $43 million by lowering and shortening bridges over Cross Creek and Deer Creek, near Allensworth.

The California Department of Fish and Wildlife nixed the plans.

In an October 2019 decision, it approved a 1,883-foot viaduct — about one-third of a mile — with 57 culverts for wildlife over the Kings River waterways. A separate decision in May 2020 ordered additional culverts and animal protections for the creeks, including 14 escape dens for kit foxes that will have to be maintained “in perpetuity.” The authority has approved at least one change order of $5 million for a viaduct over the river, and others are pending.

In a statement, rail authority officials said the wildlife issues were resolved, but the U.S. Fish and Wildlife Service, which has its own role to enforce the National Environmental Policy Act, told the Times that was not so.

In a statement, the service’s Sacramento office said it has contacted the rail authority about reviewing the latest plans for the segment, which the agency had originally approved based on a biological opinion under the U.S. Endangered Species Act. This new review “may result in the USFWS issuing an amended biological opinion on the revised project segment,” the wildlife service added.

Engineers who worked on the original environmental approvals, and asked to remain anonymous because they were not authorized to discuss project details, said they weren’t surprised the rail authority is now running into regulatory hurdles under federal and state environmental laws.

“It is mind-boggling that they would entertain some of the things that Dragados proposed,” said one senior engineer. “To have changes like this, they should have just started with a new environmental document and gone back to the beginning.” Four senior project officials who spoke to the Times on background said the state was lax in not holding Dragados accountable for the increased costs.

In its statement, the rail authority disputed it was accepting the costs for the Dragados design alterations despite agreeing to pay for the change orders. It said it is evaluating each issue to determine who is responsible. In a “finding of fact,” which the Times obtained in a Public Records Act request, the rail authority justified paying for the Hanford viaduct by asserting it would help meet a federal grant deadline.

Another 2014 decision that has caused higher costs and delays is the rail authority’s instruction that potential bidders could disregard land subsidence in what geologists call the Corcoran subsidence bowl, even though a geotechnical report on the issue had not been completed.

When it was finished in 2017, the report found that some areas of the rail passage were expected to sink 20 feet between 2016 and 2036. The analysis said it wouldn’t affect the operation of high-speed trains — because the slopes would be within the design specifications of the track — but flooding risks would increase.

Although the rail authority initially rejected paying for the extra flood protection measures, it later agreed to cover the cost, saying the measures have “merit,” according to an agency document.

Ideally, the state agency would have studied and recognized the subsidence problem before issuing a contract and would have put the required embankments into its bidding, letting different firms compete on the price, project engineers told the Times.

It did not. Current bullet train leaders, facing deadlines of their own, are now grappling with those decisions.