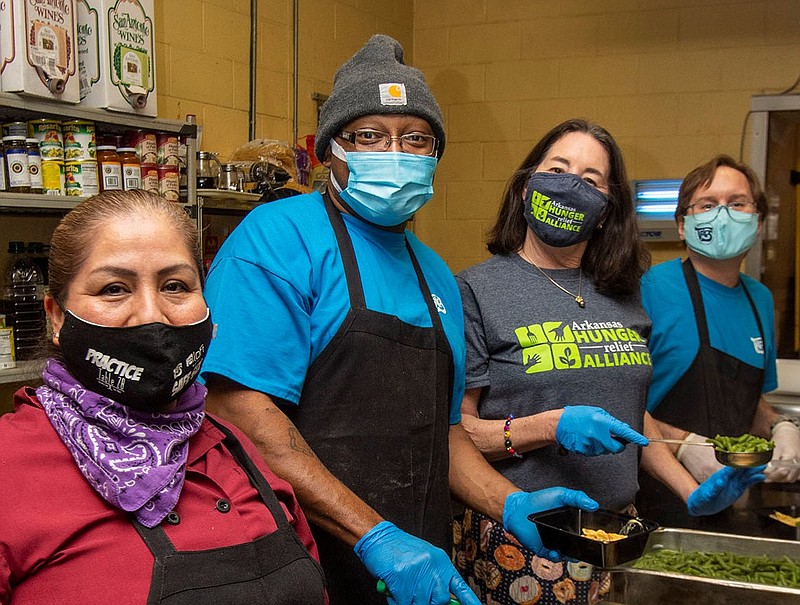 An entrepreneur/TV host, a celebrity couple and three long-standing restaurants have teamed up to provide 11,000 meals to the food-insecure in Central Arkansas.

Plating Change, a nonprofit started by Marcus Lemonis, chief executive officer of Camping World and host of CNBC's "The Profit," has made $35,000 orders at Trio's and Doe's Eat Place in Little Rock and $40,000 at Lindsey's Hospitality House in North Little Rock to provide free, hot meals to those in need and provide business to the restaurants.

Lemonis, who started Plating Change through his Lemon-AID foundation, became aware of the restaurants through his friends, Mary Steenburgen and her husband Ted Danson.

Steenburgen, who won an Academy Award for Best Supporting Actress for her role in the 1980 film "Melvin and Howard" and currently appears in the series "Zoey's Extraordinary Playlist," grew up in North Little Rock and has a connection to each of the eateries.

She and Trio's executive chef/owner Capi Peck are also buddies.

"We have known each other since high school," Peck says. "We were in a YWCA organization called Y Teens together, which encouraged young women to do community projects and give back to the community. That planted these seeds that have grown within both of us for 50-plus years."

In early December, Steenburgen contacted Peck about Plating Change. Danson had heard about the program's work in California and New York and told Steenburgen about it. (Steenburgen was not available for comment before press time).

"They partner through celebrities that have roots in the community," Peck says. "That's why Mary and Ted are involved, because of their love of Little Rock and North Little Rock."

Peck, who is city director for Little Rock's Ward 4, is also a volunteer with the Arkansas Hunger Relief Alliance. Through the Alliance, the restaurants are able to access the most food-insecure people in the area.

The restaurants are paid $10 a meal when meals are fulfilled.

"Our instructions are to come up with something nutritious that can be easily packed individually and then get that distributed," says Peck, who opened Trio's in 1986.

The three restaurants had delivered more than 7,000 meals before the snow and cold weather earlier this month caused a temporary delay in deliveries.

Growing up in North Little Rock, Steenburgen and her family often ate at Lindsey's, the legendary barbecue and home-cooking spot. The restaurant was started by Irma and D.L. Lindsey in 1956 in their house, a block from its current location at 207 Curtis Sykes Drive. Their son, Donnie Lindsey II and his wife, Eleanor, took it over in 2007.

"We are mixing it up," Donnie says of the fare they are providing for Plating Change. "We're doing a Smoked Chicken Meal with Barbecue Sauce, Green Beans, Corn and a Dinner Roll. It's a good, hearty meal."

At Doe's, kitchen workers have been coming in on Tuesdays, when the restaurant is closed, to prepare meals. They also assemble Plating Change dishes on Thursdays during regular business hours.

"We're doing 200-350 meals each day," says Doe's president and owner, Katherine Eldridge, whose father, George Eldridge, opened Doe's at Ringo and West Markham streets in 1988 through a deal with the original Doe's in Greenville, Miss. "We have kitchen help come in and a couple of volunteers to help plate."

When regular deliveries were hampered because of the snowstorm earlier this month, Eldridge redirected meals to a warming center set up at the Hall of Industry at the State Fairgrounds.

Members of the Little Rock Fire Department helped get meals out from Trio's as snow and ice covered the roads.

Plating Change is not only helping provide food to the hungry, it's giving restaurants some much-needed business during the pandemic.

"This is another day of work for several members of my staff," Eldridge says. "We're closed on Tuesdays now, this keeps them working another day that they weren't able to work, and it helps so many people in need. It feels good."

"It's been a roller-coaster ride," says Eleanor Lindsey. "You shut down, you open back up, but this has been a tremendous blessing. Capi said it's like a perfect storm, it gives us a little boost and it allows us to help those in need."

Peck says a fundraiser has been undertaken to help sustain the program after the Plating Change money runs out.

"If we could do 500 meals a week for the next several weeks, that would be fantastic," Peck says. "The community has really come together. Nobody should be hungry. Food insecurity has really escalated during the pandemic and this little way to help out has been very rewarding."