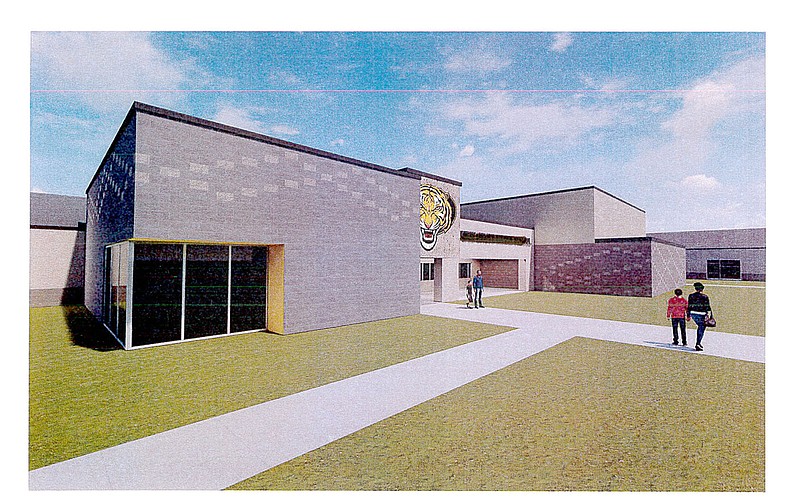 COURTESY PHOTO The front of the new Prairie Grove Junior High will have a Tiger head, along with the school name. Prairie Grove School Board looked at a photo of the concept at its meeting last week.

Joenks said schools are required to turn in their online instruction plan to the Arkansas Department of Education by May 1. Joenks said he hopes to have a draft ready for Superintendent Reba Holmes by March 19, and then it will be reviewed by Missy Hixson, assistant director with Northwest Arkansas Education Service Cooperative in Farmington.

The board will be able to review and approve it before it is sent to the state, Joenks added.

The district is sending out a survey to parents asking them about their plans for next year, whether online or on site, Joenks said.

"We are trying to get preliminary numbers," Joenks said, adding the survey would be very simple and just ask parents if they had to decide now what would they do.

Joenks said discussions with teachers will continue on what program to use for online instruction next year. He said teachers "are not totally enamored" with the current program, Lincoln Learning.

The education cooperative in Farmington has offered to provide teachers for online instruction but this staff would only teach classes. They wouldn't do any extras, Joenks said. The district would pay the teachers.

Another idea is to use Virtual Arkansas but that costs $500 a class, Joenks said.

Lincoln Learning has provided a foundation for teachers, but its lessons are very basic and do not have a lot of rigor, Joenks said.

"Teachers are frustrated with that," he said.

One idea is to use Lincoln Learning as a resource and add to it. He said he probably will recommend teachers use Google Classroom for junior high and high school and use See Saw for younger grades. The idea, Joenks said, is teachers can do their lesson plans in these programs and post links to resources for students, who are either online or on-site.

Joenks was asked if the school could require all students to attend classes on-site.

He said he believes more students will come back to on-site learning because of the covid-19 vaccine. In addition, Joenks said he believes the district needs to be more selective about virtual students. The district has found out this year that some students do not do well in the online environment.

"You cannot substitute a committed teacher in a classroom," Joenks said, adding, "The biggest difference is you have a teacher at school to give immediate help."

Joenks said the district also wants to reduce the stress and pressure on teachers next year and is looking at ways to do that.

"Our math scores have not been horrible but are not up to par for our expectations at Prairie Grove," Joenks said.

He said the state is discussing whether to make a computer science course mandatory for high school graduation. If that happens, the school would have to hire someone licensed in computer science to provide the 1/2 credit course for ninth-12 graders.

He gave an update on how the district will use the latest round of federal covid stimulus funds.

The state of Arkansas is to receive $558 million for school districts. Prairie Grove will receive $736,000 from the Elementary and Secondary School Emergency Fund, or ESSER, and Joenks said this money will be used for HVAC systems and other ventilation upgrades, summer academic programs, credit recovery programs and Chromebooks for student use.

In other action at the Feb. 16 meeting, the school board unanimously voted to renew Holmes' contract for the 2021-22 school year. The board has met in executive session at two special meetings for Holmes' annual evaluation. It did not go into executive session last week.

For the consent agenda, the board approved a $750 stipend to Kristen Walker to serve as interim head soccer coach for 2020-21 school year and hired Rosemary Anderson for food service. It approved board-to-board transfers: one student to Lincoln and two students to Farmington.

In other business, the board:

• Approved a bid of about $17,800 to replace three high school rooftop HVAC units. The district will use ESSER funds for this project.

• The board gave its OK to technology director Shawn Witt to move ahead on several technology projects throughout the district using E-rate funding. Witt proposed to use E-rate funding for projects that would cost $229,611. Of this, the district's portion would be $68,000. Projects include leased fiber, technology equipment, network cabling for the new junior high building and network switches.

For his security report, Witt said the district is looking at two locations for off-site evacuations for students if the need arises. The district has signed a memorandum of understanding with one local organization and is working on another. Witt said he did not want to announce publicly the locations for safety reasons.

"These (places) are relatively close but far enough away to not interfere with emergency vehicles," Witt said.

• Approved purchasing 90 Chromebooks for $27,584 from Best Buy. These will be kept on a cart at the schools so that students will have devices while on-site, if needed. Thirty Chromebooks will be kept in the library at each building.

• Approved change orders totaling $35,525 for the new junior high building. The change orders include remodeling the building's two mechanical rooms for an additional $24,303 and making changes to paving to coordinate with the city for the Viney Grove/Bush Street intersection for an additional $16,253. In the third change order, the district decided to delete a motorized stage curtain and substitute it with a manual curtain for a savings of about $5,000.