Rioters use Trump as defense

At least one judge isn’t buying it: ‘Detached from reality’ by MICHAEL KUNZELMAN AND ALANNA DURKIN RICHER THE ASSOCIATED PRESS | February 28, 2021 at 4:34 a.m. 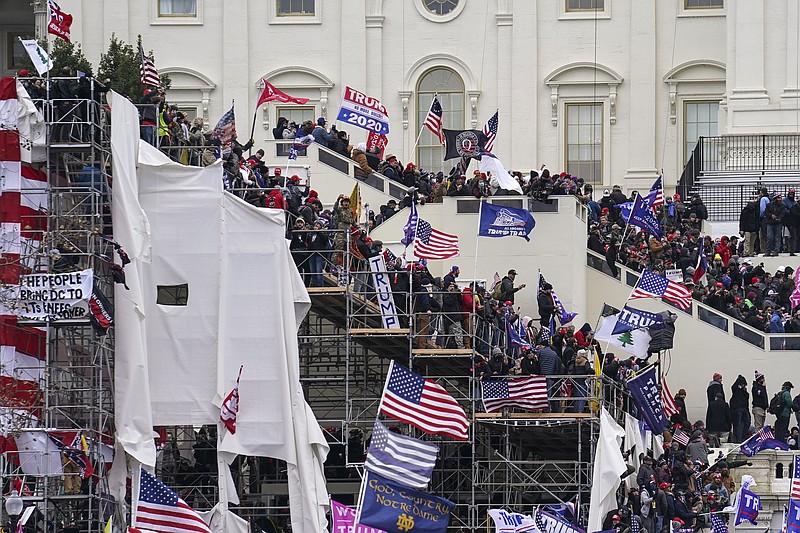 Facing damning evidence in the deadly Capitol siege last month -- including social media posts flaunting their actions -- rioters are arguing in court they were following then-President Donald Trump's instructions Jan. 6. But the legal strategy has already been shot down by at least one judge, and experts believe the argument is not likely to get anyone off the hook for the insurrection where five people died, including a police officer.

"This purported defense, if recognized, would undermine the rule of law because then, just like a king or a dictator, the president could dictate what's illegal and what isn't in this country," U.S. District Judge Beryl Howell said recently in ordering pretrial detention of William Chrestman, a suspected member of the Kansas City-area chapter of the Proud Boys. "And that is not how we operate here."

Chrestman's attorneys argued in court papers that Trump gave the mob "explicit permission and encouragement" to do what they did, providing those who obeyed him with "a viable defense against criminal liability."

Trump was acquitted of inciting the insurrection during his second impeachment trial, where Democrats made some of the same arguments defense attorneys are making in criminal court. Some Republican lawmakers have said the better place for the accusations against Trump is in court, too.

Meanwhile, prosecutors have brought charges against more than 250 people, including conspiracy, assault, civil disorder and obstruction of an official proceeding. Authorities have suggested that rare sedition charges could be coming against some. Hundreds of Trump supporters were photographed and videotaped storming the Capitol and scores posted selfies inside the building on social media, so they can't plausibly argue in court that they weren't there. Blaming Trump may be the best defense they have.

"What's the better argument when you're on videotape prancing around the Capitol with a coat rack in your hand?" said Sam Shamansky, who's representing Dustin Thompson, an Ohio man accused of stealing a coat rack during the riot.

Shamansky said his client would never have been at the Capitol on Jan. 6 if Trump hadn't "summoned him there." Trump, he added, engaged in a "devious yet effective plot to brainwash" supporters into believing the election was stolen, putting them in the position where they "felt the the need to defend their country at the request of the commander in chief."

While experts say blaming Trump may not get their clients off the hook, it may help at sentencing when they ask the judge for leniency. It could also bolster any potential cases against the former president, experts say.

While the legal bar is high for prosecuting Trump in the Capitol siege, the former president is already facing a lawsuit from Rep. Bennie Thompson, D-Miss., that accuses him of conspiring with extremist groups to prevent Congress from certifying the election results. And more lawsuits could come.

A lawyer for Jacob Chansley, the shirtless man who wore face paint and a hat with horns in the Capitol, attached a highlighted transcript of Trump's speech before the riot to a court filing seeking Chansley's release from custody. The defense lawyer, Albert Watkins, said the federal government is sending a "disturbingly chilling message" that Americans will be prosecuted "if they do that which the President asks them to do."

In another case, the judge called an attorney's portrayal of the riots as mere trespassing or civil disobedience both "unpersuasive and detached from reality." In yet another, a judge rejected a man's claim that he was "duped" into joining the anti-government Oath Keepers group and participating in the attack on the Capitol.

Meanwhile, a lawyer for Dominic Pezzola, another suspected Proud Boy, said he "acted out of the delusional belief that he was a 'patriot' protecting his country." Defense attorney Jonathan Zucker described Pezzola as "one of millions of Americans who were misled by the President's deception."

"Many of those who heeded his call will be spending substantial portions if not the remainder of their lives in prison as a consequence," he wrote. "Meanwhile Donald Trump resumes his life of luxury and privilege." 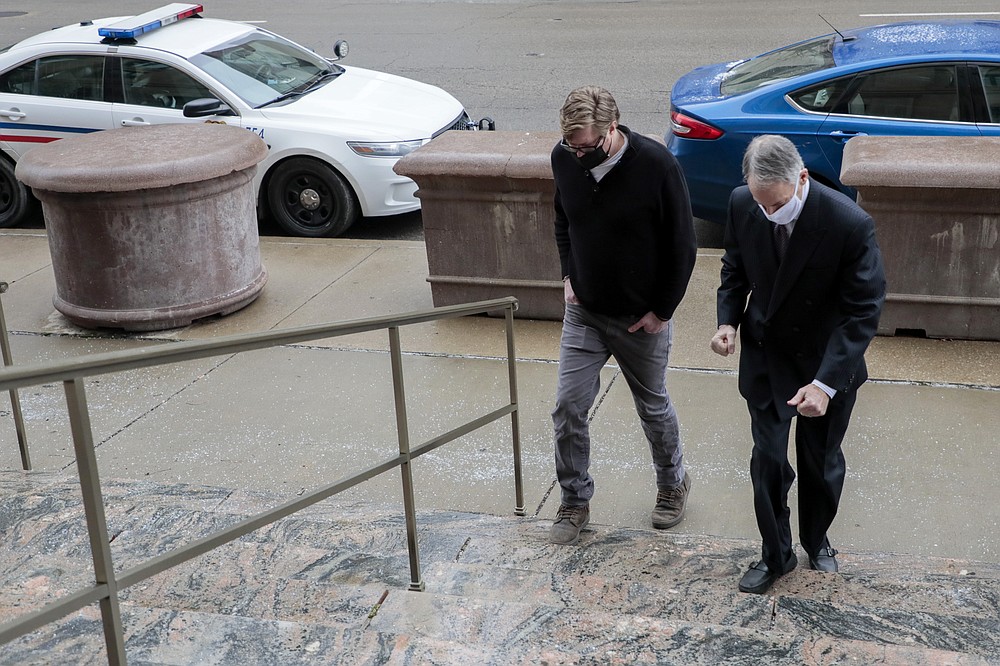 FILE - In this Jan. 25, 2021, file photo Dustin Thompson, left, of Columbus, who is accused of being part of the Jan. 6 insurrection at the U.S. Capitol, arrives with his lawyer, Sam Shamansky, to turn himself in at the Joseph P. Kinneary U.S. District Courthouse in Columbus, Ohio. (Joshua A. Bickel/The Columbus Dispatch via AP, File) 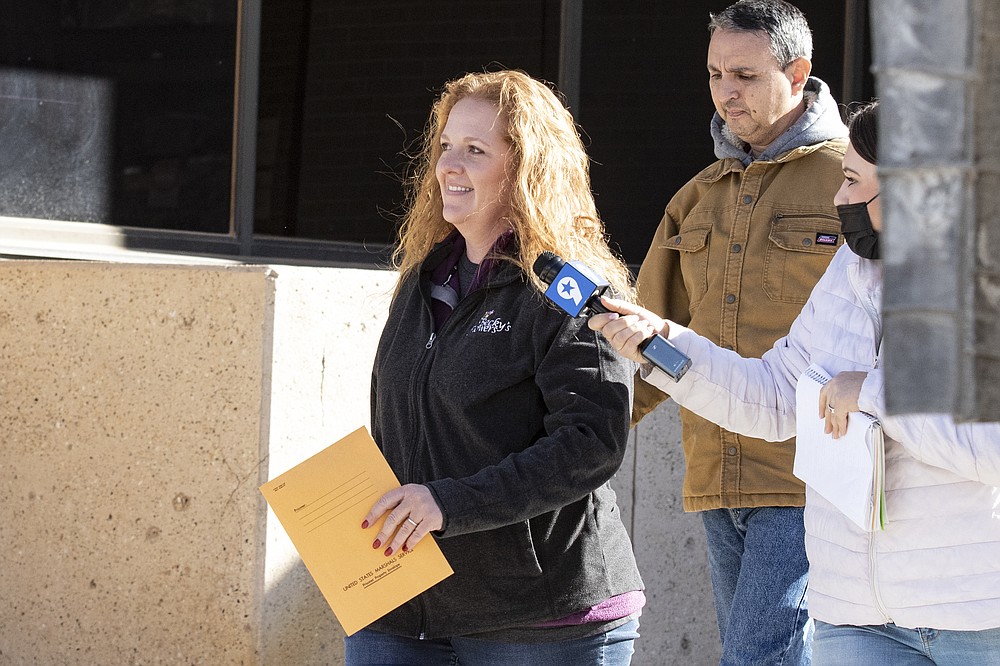 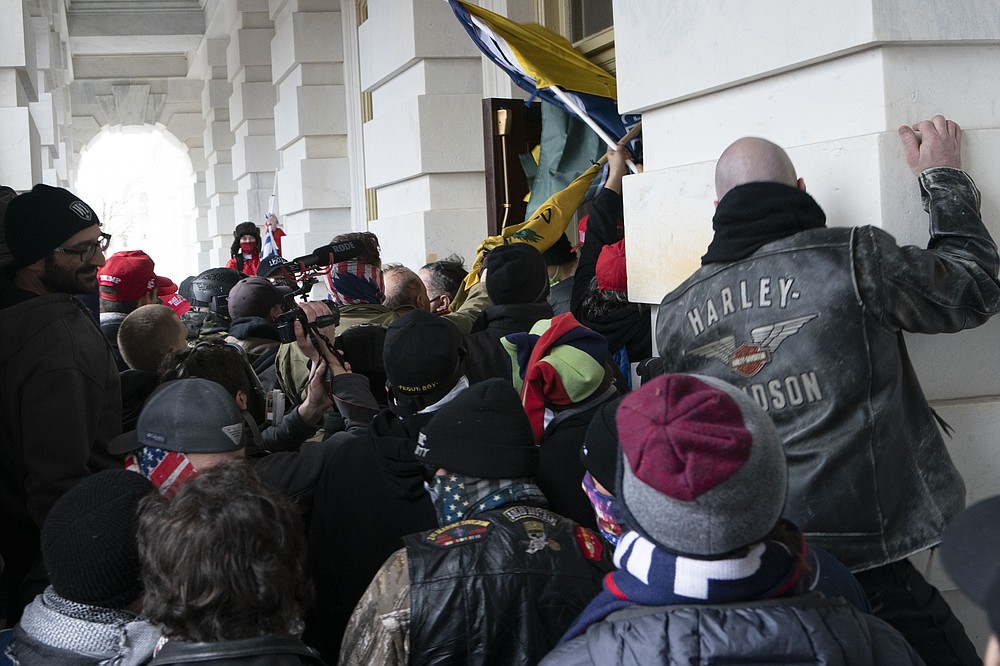 FILE - In this Jan. 6, 2021 file photo insurrectionists loyal to President Donald Trump try to open a door of the U.S. Capitol as they riot in Washington. (AP Photo/Jose Luis Magana, File) 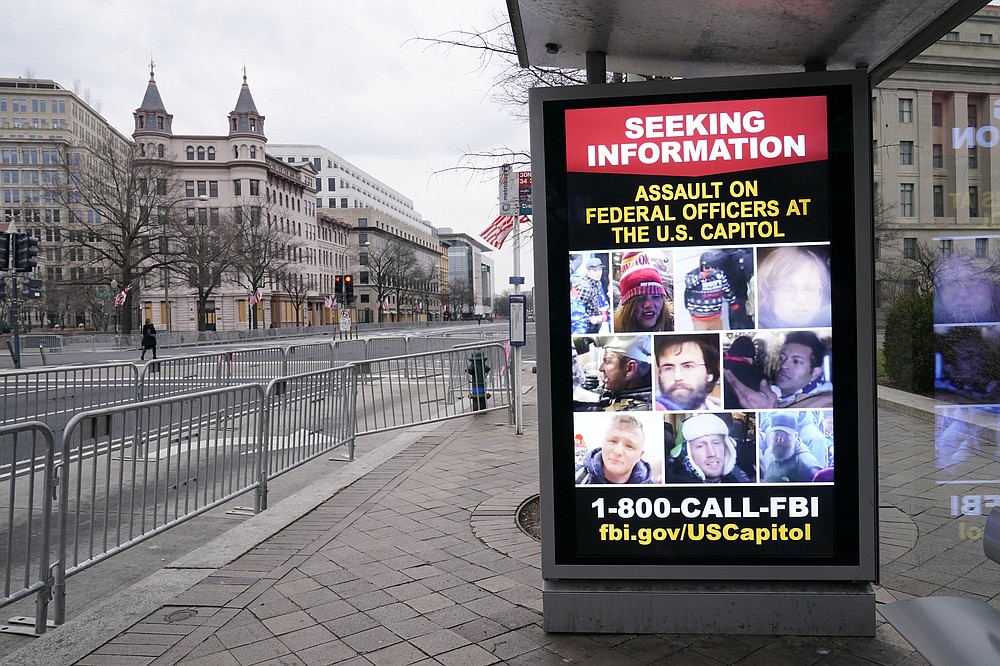 FILE- In this Jan. 15, 2021, file photo a bus stop along Pennsylvania Avenue shows a poster from the FBI in Washington. (AP Photo/Susan Walsh, File) 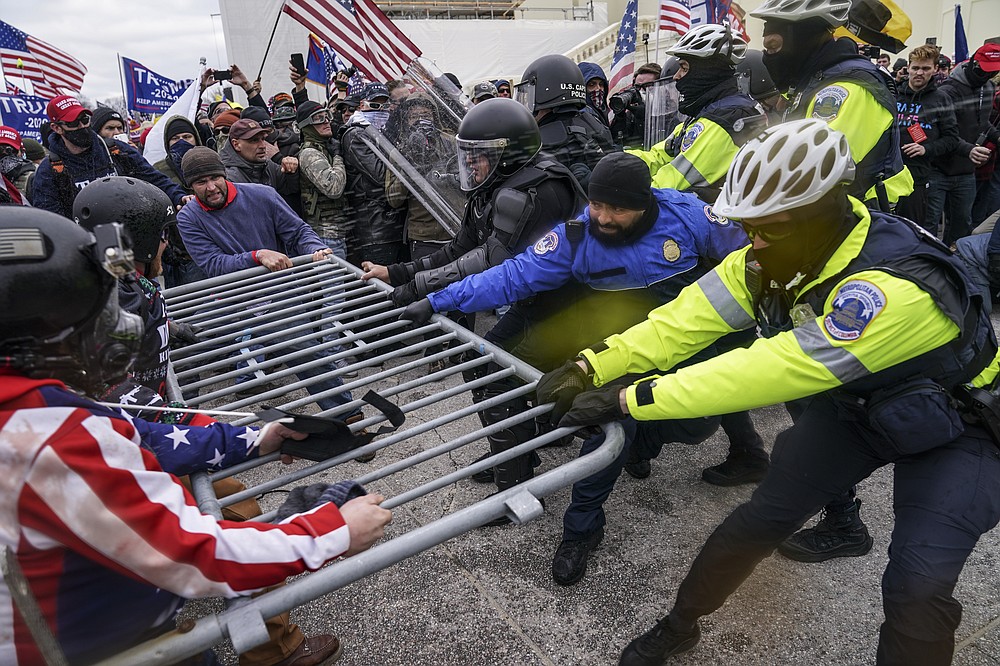 FILE - In this Jan. 6, 2021, file photo rioters try to break through a police barrier at the Capitol in Washington. Congress is set to hear from former security officials about what went wrong at the U.S. Capitol on Jan. 6. (AP Photo/John Minchillo, File) 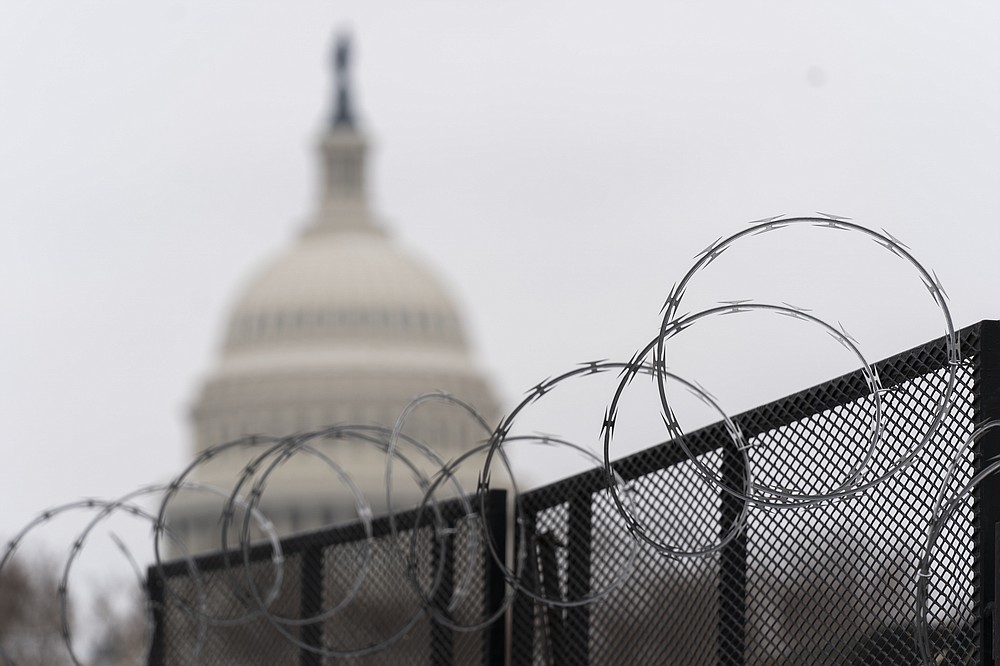