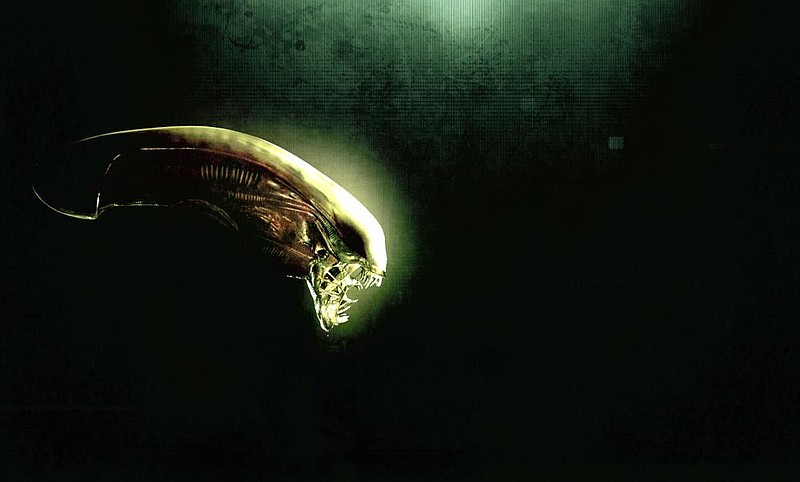 You don't have to show the monster early or often.

If you want to scare us, withhold the monster.

Spielberg did that in "Jaws," in part because his monster looked like junk if you inspected it. His monster malfunctioned. He couldn't deploy it as originally intended, so he cut his movie to make that an advantage. That's what has been reported anyway.

Four years after "Jaws," in 1979, Ridley Scott made a movie that hybridized horror and science-fiction -- a haunted house movie set in space. He put a monster on a spaceship. He was not the first to do this. I thought of "Nosferatu" (1922) when the ship's first mate disturbs the vampire. A more obvious influence is 1958's "It! The Terror From Beyond Space," in which a murderous Martian stows away on a ship bound for the Earth. And "It!" simply transposes the plot of Agatha Christie's mystery novel "And Then There

Were None" into the key of science fiction.

David Cronenberg, who would in the 1980s become known as the leading proponent of so-called body horror, even went so far to suggest that the script for "Alien" inappropriately borrowed from his 1975 film "Shivers" in which a mad scientist creates a sex-spread parasite that infects bodies of his neighbours via the promiscuity of his mistress.

"I have to say that some of my images like this [parasite] ended up in things like 'Alien,' which was more popular than any of the films I've ever made," Cronenberg told Cahiers du Cinéma's Serge Grünberg. "But the writer of 'Alien' has definitely seen these movies, Dan O'Bannon. The idea of parasites that burst out of your body and use a fluid and leap on your face, that's all in 'Shivers.'"

Screenwriter O'Bannon, who co-wrote the film with Scott, cheerfully acknowledged in David McIntee's book "Beautiful Monsters: The Unofficial and Unauthorised Guide to the Alien and Predator Films," that "he stole it from everybody!"

Including himself -- just a few years earlier in 1974, before he would have had the opportunity to see "Shivers," O'Bannon co-scripted John Carpenter's "Dark Star." Though the beach ball of an alien in that film presented as somewhat less ferocious than the seldom-seen monster in "Alien," the plots are similar.

There are many parents to "Alien." A DNA test would likely reveal some "High Noon" in its heritage as well as some Universal Classic Monsters stock. Some "Stars Wars" comes through in Scott's depiction of scruffy space truckers working for a living in a dingy and scratched up "used future."

There is even a strain of high art whispering through the movie's bloodline -- Swiss painter H.R. Giger remembered living through World War II in his Nazi-adjacent homeland, the lamps in the family home "always a bluish dark so the planes would not bomb us."

Giger channeled the morbid anxiety of his childhood into his art, painting skulls and mummies and the monster that, for most of the running time of "Alien" is withheld.

"Alien" works as a cathartic scare film and as a work of artful design, but the best way to watch it may be to invest in the human crew of the Nostromos. While you can argue that the script is straightforward to a fault, with the characters motivated by the primal motive to survive (Cronenberg thought the movie lacked ideas, that the characters simply wanted to avoid "being eaten by a crocodile"), it is a wonderfully acted movie.

We have the grunts Parker (Yaphet Kotto) and Brett (Harry Dean Stanton) bitching about their jobs, worried about collecting their shares, resenting the whims and fortunes of the brass, the capable, easy-going Dallas (Tom Skerritt) and his chief lieutenant, the doomed and selfless Kane (John Hurt). Science officer Ash (Ian Holm) is predictably icy and mission-focused -- a little Spockian, perhaps.

There's the Navigator Lambert (Veronica Cartwright) and warrant officer Ripley (Sigourney Weaver), who would (spoiler alert) emerge from the movie as iconic as Giger's monster.

Who was, in the first film, played by a human, a Nigerian graphic artist named Bolaji Badejo, son of the director general of the Nigerian Broadcasting Corporation, who was 6 feet 10 inches tall and remarkably lean with long legs. He was discovered in a London pub and took mime and tai chi classes to prepare for the role. They custom-built the suit around him, and had him keep for the most part to the shadows.

It is remarkable to note that while several of the cast members had reputations as fine character actors, none of them would have been considered stars at the time. Cartwright, at 29 years old, was the youngest member of the principal cast. (Badejo, concealed within the Xenomorph costume, was 26). It's difficult to imagine that similar casting decisions would be made today.

One of the striking things about "Alien" is how naturalistic the performances are. It's a gritty independent drama with serious actors, set in a fantastic environment. It had none of the wink-wink-nudge-nudge quality of "Star Wars," and didn't drift toward camp like a lot of late '70s horror movies like "Phantasm."

Some dialogue was even improvised; Scott and Hurt worked out the chest-bursting scene without giving the other actors much information about how it would play out. The reactions of the actors, being sprayed by blood from Hurt's (prosthetic) torso, are reactive, not rehearsed.

I told my wife, Karen, I was writing about "Alien" and she seemed to shudder.

"That's one scary movie," she said.

And it is not scary in the cheesy Blumhouse way of horror. The terror of "Alien" is of a deeper order, more like "The Exorcist" or the psychological effect of "Rosemary's Baby" (in which we never see the devil or the baby).

Perhaps the closest analogy may be Ken Russell's transgressive and genuinely profane 1971 film "The Devils," which conflates sexual and religious furor and ecstasy in discomfiting ways. ("The Devils" is also notoriously hard to see, having never been released on DVD or Blu-ray, which makes it all the scarier.)

It's difficult to think of a film released since "Alien" that evokes a similar dead-serious dread, though there are two Cronenberg films -- 1983's "Videodrome" and 2002's "Spider" -- that come close.

At least part of that has to do with the circumstances in which the movie is initially encountered; I first saw "Alien" when I was 20 years old in a theater as the director intended. My experience was not much different from a lot of other college students who saw it during its initial theatrical run.

I was familiar with the conventions of film but didn't give much thought about how movies worked or didn't work. I was far more innocent than when I saw, for instance, "The Babadook" as a veteran film critic in 2014.

The "Alien" we encountered in a cinema all those years ago is a different "Alien" than anyone will walk into this weekend. The terror of the original film has been diluted by the various sequels and spin-offs -- it was recently announced that Noah Hawley, having pulled the same trick for the Coen brothers' "Fargo," will be writing and executive producing an anthology television series based on the film.

The sort of detailed mythology that supports fan fiction has been erected around the movie; the monster has become a celebrity. It has appeared in a soda commercial (a Pepsi ad tied to the release of David Fincher's "Alien 3" in 1992) and at least 20 video games have featured the character or other members of its species Xenomorph XX121.

These days the monster has its own Wikipedia page. You know its eggplant-shaped head; you can read detailed speculative histories of the species on the internet and know the mechanics of face-hugging and chest-bursting with a few clicks.

It is no longer a shadow moving through shadows. It's an icon; its penetrative psychosexual horror is a fit subject for both scholarly deconstruction and skit comedy.

We have dragged the monster into the light and made it a symbol and a clown. We have pulled the wings off the butterfly.

But in his time, he was terrible. 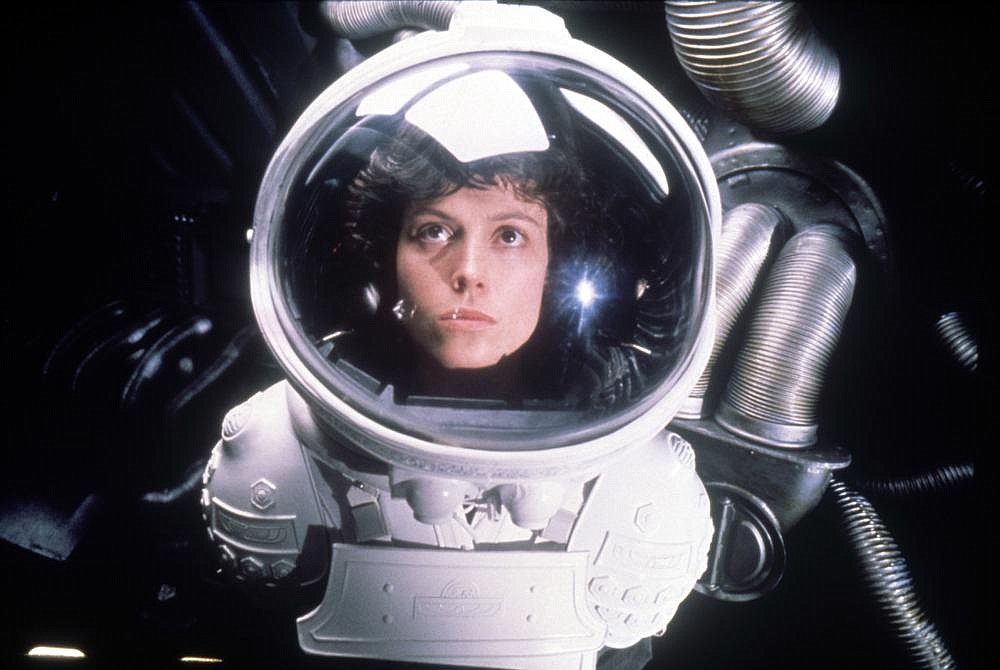 Sigourney Weaver plays Ellen Ripley, who was a warrant officer on the USCSS Nostromo in 2122 when it encountered a single Xenomorph unintentionally collected from the planetoid LV-426 and is perhaps the greatest action heroine of all time.
ADVERTISEMENT