'Pinocchio' is another dark fairy tale 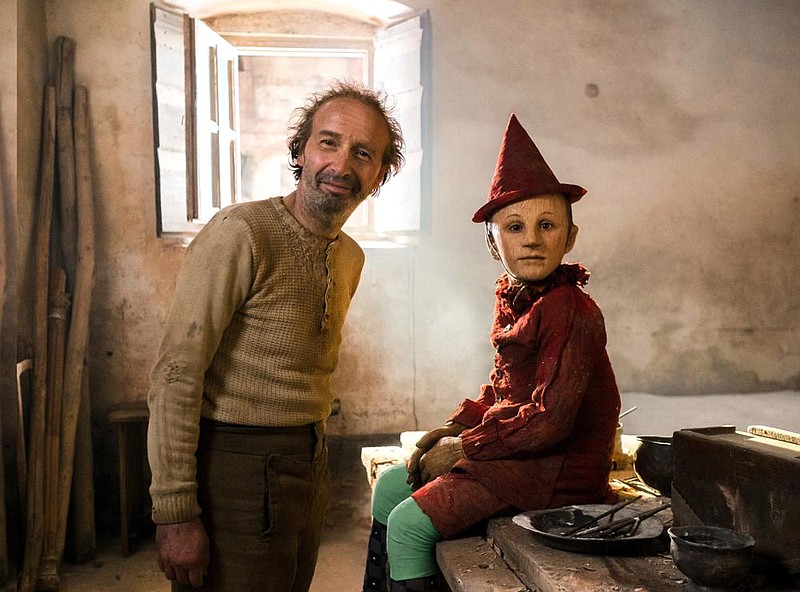 Matteo Garrone won the Grand Jury Prize at the Cannes Film Festival for his 2008 gangster drama "Gomorrah" and has received similar acclaim for his black comedy "Reality," about a would-be "Big Brother" contestant and "Dogman," about a dog sitter who supplements his income by peddling cocaine.

If you follow his directorial career closely, however, it's not surprising that his latest effort is a new adaptation of Carlo Collodi's 1883 fairy tale "Pinocchio."

If most of Garrone's previous movies are set in a grim world free of magic, he explains that the themes and approach are remarkably similar.

"There is something of 'Pinocchio' in the other movies I have done," he says by phone from his native Rome. "It's true that certain parts of 'Gomorrah' were a dark fairy tale. The lesson of Collodi in 'Pinocchio' is to teach the kids how dangerous can be the world around you, without following the advice of the people around who love you. In parts of 'Gomorrah,' I saw how dramatic the decisions can be that the kids take and how having the wrong model that can destroy you. I think in a way, 'Pinocchio' is not so far away from 'Gomorrah.'

"When I tell fairy tales, I like an approach that's very realistic and to mix realistic and supernatural dimensions, like in the book of Collodi. He mixes realism and the dimension of magic."

If the comparison sounds weird, the "Gomorrah" is the story of two teens (Ciro Petrone and Marco Macor) who imagine they are hard core gangsters when they obtain firearms.

"They are following an illusion," he says. "They think that no one can beat them. They have the reference of 'Scarface.' They think they are in a movie in a way. They are naïve. The thinner one (Petrone) could be Pinocchio. He's in other movies that I've done. He (Petrone) brings me luck."

Careful viewers can spot Petrone as a bartender in "Reality" and as a ticket taker in "Pinocchio."

Garrone is not a stranger to fantasy. His 2015 R-rated adaptation of 17th-century poet Giambattista Basile's "Tale of Tales" featured John C. Reilly battling a convincing sea monster and a lifelike flea that's the size of a schnauzer.

In addition to the wooden marionette title character, "Pinocchio" has a talking tuna, a tree that grows gold coins (even in the film, sadly, it's just a dream) and an enormous snail who keeps up the home of the blue fairy (Marine Vacth).

The only time I encountered anything approaching a language barrier during our brief conversation came when I fumbled in asking him about how he made imaginary beings like Pinocchio and the overgrown flea seem like living beings. His aesthetic vocabulary is remarkably wide, but I still couldn't put my question together properly. Finally, I switched the wording to how he's able to make movies with such good monsters.

"Pinocchio's not a monster," he says. "He's a puppet. He's a kid. He's a fantasy hero. He desires to be a boy, so it was important to give humanity to this puppet."

That's impressive considering that Pinocchio has a detailed wood grain and looks more like maple than flesh.

"It's the incredible work of (special makeup effects artist) Mark Coulier ('The Iron Lady' and 'The Grand Budapest Hotel'), who is one of the most important artists for prosthetics. He's already won two Academy Awards. He helped me to arrive at such a high level of quality," Garrone explained.

Garrone included some of the darker material that Walt Disney deleted from his own 1940 animated masterpiece. For example, assassins chase after the puppet and hang him before supernatural forces arrive for his rescue. The new film has a PG-13 rating and retains much of the flavor of the original tale.

"In the story of 'Pinocchio,' every animal represents a member of society in a way," he says. "I always feel a little out of tune when I see a realistic animal that talks with the voice of a human being. I decided to make these characters more anthropomorphic, so a little bit human, a little bit animal. So this way, it's not so strange to see them speaking with a voice. We tried to be faithful to the incredible illustrations of Enrico Mazzanti, who was the first illustrator of 'Pinocchio.'"

The director also depended on his unusually dedicated leading man Federico Ielapi, whose expressions could still be seen under all the makeup.

"Federico was 8 years old when he worked on the project," Garrone say. "For three months, he had to do four hours every day in makeup to become a puppet. He was strong, brave. It was the opposite of the character of Pinocchio, so he was very good in his interpretation. As you know from the book, Pinocchio is a character who always runs away from every discipline, duty. He escapes from every effort. Federico has been very generous, but also very, very brave to support a character so complex."

Under the Tuscan Sun

Roberto Benigni, who won Oscars for directing and starring in "Life Is Beautiful," also played Pinocchio in his own 2002 adaptation, but he's getting better reviews for playing Geppetto, the cash-strapped woodcarver who becomes Pinocchio's father.

European audiences like his performances as the puppet better than Yanks did (people who hadn't read the book were disoriented). That said, Americans, who might remember Benigni walking on audience chairs to receive his Oscars, will be surprised by Benigni's subtlety in the new movie.

Unlike Federico, Benigni wasn't submerged under prosthetics, but Garrone says the comic, who has also starred in movies by American directors Woody Allen ("To Rome with Love") and Jim Jarmusch ("Down by Law"), didn't need them.

"Roberto was very generous to play Geppetto with me," Garrone says. "When he decided to run this risk with me, I thought it was the most beautiful that I could have. Roberto comes from that world. We know that the story of 'Pinocchio' is the story of poverty in a period of Italy when there was a lot of poverty. Roberto grew up in Tuscany (as did Collodi), the son of a farmer, knowing what it means to be poor. So, he's sort of a symbol of an Italy that is sort of disappearing."

Similarly, Pinocchio's Italian origins are often taken for granted. Collodi's book appeared in serial form in 1881, but today, you can spot him in Geico ads where his nose grows as he lies to a crowd about the untapped potential in the room (his career as a motivational speaker was short). He's made cameos in the "Shrek" movies, and the Washington Post awards fibbing politicians "Pinocchios" in his, um, honor.

When asked about how Pinocchio now belongs to the world, instead of just Tuscany, Garrone says, "It's true it's very Italian, but like all the masterpieces of literature, it's universal. It talks about today. It talks about the past, and it talks about the future. My approach was to be faithful to the soul of the story by Collodi and tried to give to the audience that thinks it knows the story before reading the book as an adult. When you read the book you discover there are many things that you do not know. At the same time being faithful to the book is the best way to be surprising for the audience. It's a paradox, but it's my approach to this movie."

Nonetheless, Garrone insisted on shooting "Pinocchio" in Italian while he shot "Tale of Tales" in English. Even the dub that's now playing Stateside reminds America where both the film and the book came from.

Federico Ielapi's Herculean efforts didn't end on set. On the new English soundtrack of the film, he even re-recorded his own voice. European audiences frequently see North American films dubbed in the local tongues, so the director says recording new dialogue wasn't much of a challenge.

"We are masters of dubbing because we have done it for a long, long time," Garrone says. "In Italy, the audience is used to seeing a movie dubbed. I knew we could do something that was a really, really high level of dubbing. I was sure we could do a dubbing that they didn't realize it was dubbed. We decided to keep the accents of Italy a little bit. The voices in the movie are tied to that world. We made tests and had incredible reactions. We can make the movie universal and also for the kids. I think the dubbing that we have done is as good as the original."