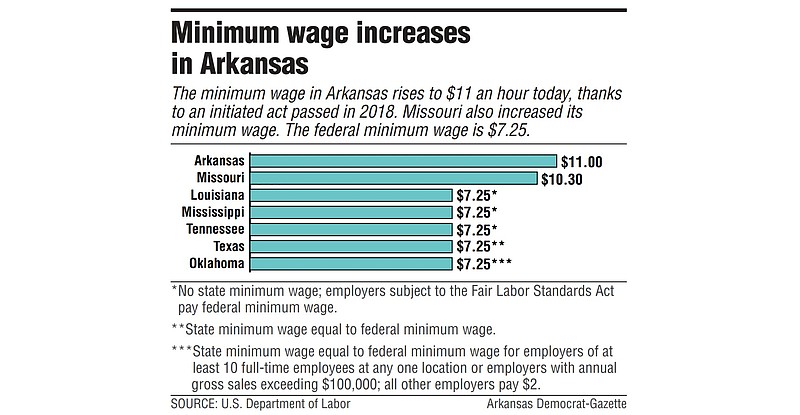 Arkansas' 2021 minimum wage is higher than that of surrounding states.

Effective today, Arkansans making the state minimum wage will receive a $1 per hour pay increase under an initiated act passed in 2018.

Arkansas businesses must now pay employees no less than $11 an hour, marking the final step of a three-year phase-in that began in 2019. Before then, the state's minimum wage was $8.50 per hour.

The wage increase amounts to a $40 per week raise, before any taxes or other deductions, for employees who work 40 hours a week at minimum wage. Minimum-wage earners in Arkansas will make up to $440 a week.

The change comes in the midst of economic uncertainty brought on by the worst pandemic in 100 years. Supporters say the $1 increase comes at the perfect time, when many families are struggling to make ends meet.

"The chances of any of it really going into savings are slim. Not only are people going to get more money, they're going to have more money to spend," said David Couch, who led the campaign for the initiated act in 2018.

Those opposed say it puts a burden on businesses in an already-difficult time.

"It will make it more challenging for some people to find work because business owners will be forced to pay their people for fewer hours or hire fewer people to offset the increase. It's difficult," said Randy Zook, president of the Arkansas State Chamber of Commerce.

The Natural State is one of 20 states that raised its minimum wage effective either Thursday or today. Another state, Michigan, previously planned to raise its minimum wage, but a state law prohibits scheduled minimum-wage increases when the state's annual unemployment rate is above 8.5%.

In 2018, Arkansas was one of six states to raise wages through ballot initiatives. Missouri is the only neighboring state to raise its minimum wage at this time, from $9.45 to $10.30 an hour. It will continue to increase by 85 cents per hour each year until 2023, when it reaches $12 an hour.

Arkansas' other surrounding states follow the federal minimum wage, which was set at $7.25 an hour in 2009.

Gov. Asa Hutchinson, along with the state's congressional delegation, opposed the 2018 measure.

Asked at a Dec. 22 news conference if he would seek a moratorium on increasing the minimum wage due to the pandemic, Hutchinson said he would not.

Noting that it was a voter-approved matter, the governor said, "... (T)hat would not be something that I am considering or would consider, and that's not driving the concerns that I've heard from small businesses. They are struggling, but there's a lot of different factors in that, and of course that does impact their wage rates as well, but I am delighted that Congress in a bipartisan way came together and provided small-business relief." The governor was referring to the Paycheck Protection Program.

Zook said Tuesday that the state chamber did not have any plans to address the minimum wage increase during the 2021 regular legislative session. The session starts Jan. 11.

"It's a difficult issue," he said. "It's a popular idea, to increase wages, you know, but at the same time there are limits. But it's a political challenge. When people start voting for their income, bad things typically happen."

During the 2019 regular session, lawmakers debated a measure that would have exempted small businesses and nonprofits from the minimum-wage increases, but the legislation died.

Zook, as well as some state legislators, have noted concerns about the rising costs of child care. Couch was skeptical.

"I'm sure in some instances it might for people who didn't get an increase in minimum wage and had to pay more for day care, but the moral of my story is that the day care is inflating the price way more than the cost of the additional wages," Couch said.

Jamie Thornton, co-owner of Natural State Smoothies in Fayetteville, said he feels the wage increase is going to hurt a lot of businesses like his. The business has 14 part-time employees, all college students, who he said are all looking for extra hours to work that he can't give them.

"I'm in favor of paying a living wage, but it's going to be hard for businesses like ours," Thornton said. "If it was a quarter to 50 cents a year every year for the next five or six years, that would have been a much easier thing for small businesses like mine to be able to do, but a dollar during a worldwide pandemic is an awful lot to ask businesses that are already struggling to be able to do."

Thornton said he will likely try to increase prices in order to make payroll.

Bruno Showers, senior policy analyst at Arkansas Advocates for Children and Families, didn't rule out workers' hours being reduced due to minimum-wage increases, but said that doesn't result in their overall pay going down.

"If you're making $7.25, then make $11 and work 35 hours, you still have more income in your pocket. I think most people would consider that a good thing," he said.

The nonprofit group supported the 2018 minimum-wage-increase initiative and released a study the same year that found that about 1 in 4 Arkansas workers -- nearly 300,000 people -- would benefit from the minimum-wage increase.

That number includes 213,000 workers whose pay is directly impacted by the law and another 88,000 who make slightly more than the state minimum wage and whose pay would likely rise as employers pay more to keep them, according to the study.

Showers said minimum-wage increases have a net zero impact on unemployment rates, as the higher wages are injected back into the local economy.

The Arkansas Minimum Wage Act applies to employers with four or more employees. Under state law, tipped employees must be paid at least $2.63 per hour, and the tips they earn must be enough to bring them up to minimum wage.

The states with the highest percentages of hourly paid workers earning at or below the minimum wage were in the South, according to the bureau's report.