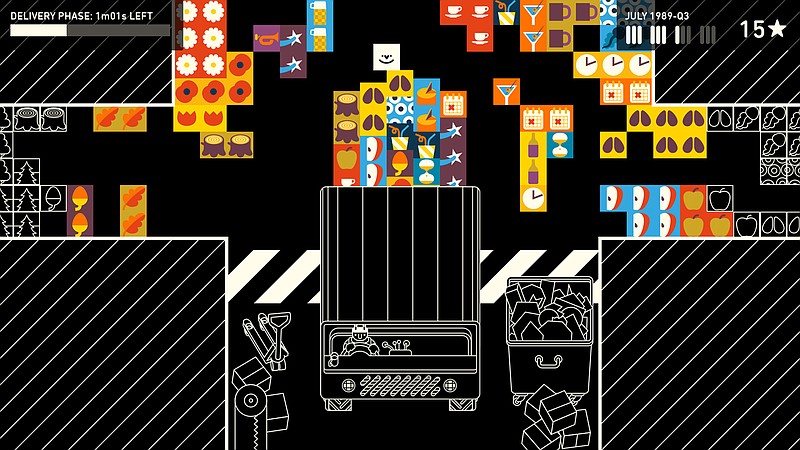 Wilmot's Warehouse is a game for people who like to organize. You are Wilmot, the employee responsible for storing all of the products in the warehouse as they arrive. Later you have to find them — quickly. (Photo courtesy Finji)

If a game can somehow be zenlike and relaxing, but also fast-paced and anxiety-inducing, "Wilmot's Warehouse" is a top contender.

Created by an indie studio based out of Grand Rapids, Mich., "Wilmot's Warehouse" is a gem that will scratch an itch you maybe didn't know you had, requiring pattern recognition, spatial reasoning and a good memory.

Wilmot, bless his little heart, is an always-smiling white block, and it's his job to quickly sort incoming truckloads of products in a big, mostly empty warehouse and then deliver those items to co-workers in a timely fashion.

Like Wilmot, the products also are all squares, and each block has a brightly colored but minimalist design, such as an umbrella or mountain or diamond.

How the warehouse is organized is entirely up to the player, but what makes the game tricky is that only the blocks near Wilmot can be seen. As Wilmot moves away from an area, the products first turn into black-and-white outlines, and then vanish entirely. Players will have to rely on their memory and sorting ability to recall where products are stored.

There are seemingly infinite ways to store items for ease of recall. You might notice that you have a number of building products, such as factories and skyscrapers and apartments, so you put those in one area, and in another area, you store blocks showing planets and stars. But then a new shipment comes in with a space observatory block. Where does that go?

In a way, "Wilmot's Warehouse" is a game about pictograph language. While it's usually quite clear what is represented by each design, what's less clear is how those items should be grouped together, and in the end it seems like a very personal choice that might say a lot about the way we think.

The game alternates between two phases: a sorting phase to organize or reorganize, and a fetch phase in which products are delivered to waiting co-workers.

After customer orders have been picked out of the warehouse and delivered to waiting co-workers, another delivery truck arrives, always bringing an ever-increasing number of items, and with a greater variety. Wilmot has only a limited amount of time to sort and store the newly arrived products. Players must not only sort the new blocks and deliver them to the area where similar blocks are already waiting, but then take several new items and find a place for them.

Along the way, Wilmot can earn some handy upgrades, such as the ability to carry more than six items at once and a speed boost for zipping around when empty-handed.

Making co-workers happy with prompt deliveries can earn Wilmot stars, which are used to buy the upgrades. He does have a boss, who occasionally rewards him with motivational posters encouraging him to lift with his legs, not his back. Big help, those.

Thankfully, there are chances to relax during all the organized chaos. Every fourth delivery, Wilmot gets an opportunity to rearrange the warehouse with no limit. Often, the dozen or more new varieties of items that have arrived will lead to a complete reorganization of the warehouse, in search of maximizing worker efficiency.

If you want the true Amazon warehouse worker experience, there's a hard mode available that gets rid of the unlimited reorganization time and shortens the amount of time available to unload shipments and make deliveries. Thankfully, you can still pause for bathroom breaks without being penalized.

There's also a neat feature that will show you a bird's-eye-view timelapse of how the warehouse changes throughout the game. In total, there are 200 block types that Wilmot will have to sort, push and pull around the warehouse (the appearance of which is randomized in each new game). And once that majestic peak of ultimate efficiency has been reached, Wilmot, that reliable paragon of promptness, is promptly fired and replaced by an automated, robotic system.

Maybe he can go back to school to learn to program robots.

Special mention goes to the game's music, which is a sublime electronic soundtrack by Eli Rainsberry.

"Wilmot's Warehouse" might look like a simple puzzle game on the surface with its minimalist design and easy-to-grasp controls, but beyond being enjoyable, it clearly also has something to say about the world and about ourselves. 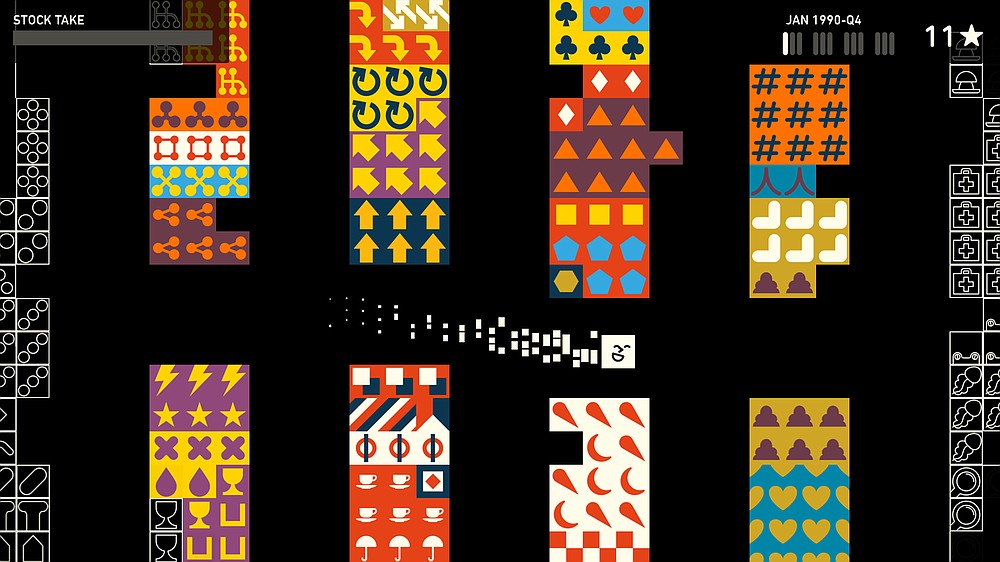 Wilmot's Warehouse is a game for people who like to organize. You are Wilmot, the employee responsible for storing all of the products in the warehouse as they arrive. Later you have to find them — quickly. (Photo courtesy Finji)
ADVERTISEMENT