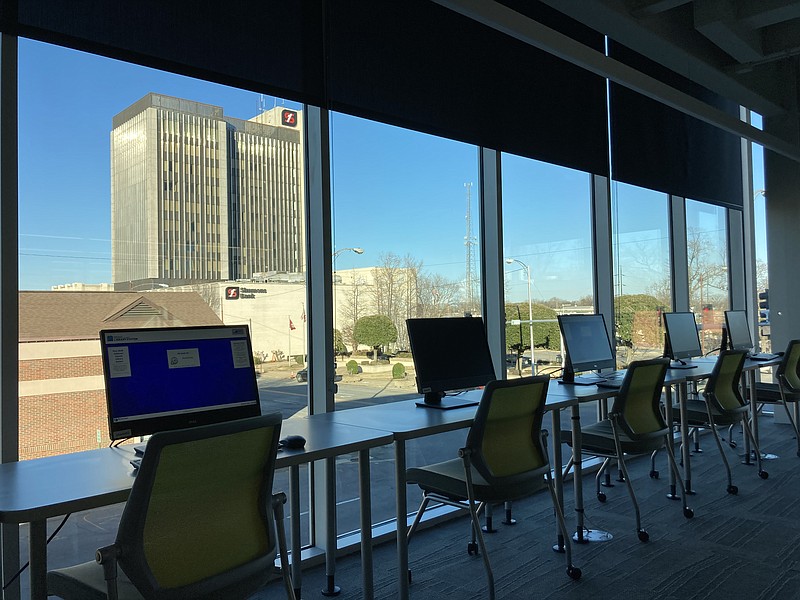 Head librarian Bobbie Morgan says she will be back to work on Jan. 19. Shown here is the view from the computer lab at the newly opened library in Pine Bluff. (Pine Bluff Commercial/Byron Tate)

Head librarian Bobbie Morgan said Monday that she plans on coming back to work.

Morgan, who is the director of the Pine Bluff/Jefferson County Library System, was said last month to have cleared out her desk and moved her house belongings to Georgia where she was going to work remotely. But reached by cellphone on Monday, Morgan said the reports of her departure had been greatly exaggerated.

"I'm still on vacation and will be gone for another two weeks," she said. "I'll be back the day after the Martin Luther King holiday," which is on Jan. 18 this year.

Morgan declined to talk about her work situation after a special meeting that was called in December by the library's board of trustees -- a meeting she did not attend.

At that meeting, the trustees voted not to accept Morgan's proposal to work remotely. They instead approved a resolution saying that Morgan, once her vacation was exhausted, had to come back to work and physically be in the building. If she declined to do that, the board said, then she would be asked to tender her resignation immediately.

Morgan said Monday that she had received a letter on Wednesday outlining the board's requirements for her return. The board had set Jan. 4 as the date when she would have to return.

Morgan said she was unaware of that date and said she needed a couple more weeks off because she had run into problems in getting her house in order. After that, she said, she will return and will work until April 2, which has been her exit target for a few months now.

She did say, however, that the minutes of the October board meeting show that the board had already agreed to her request to work remotely.

In the audio recording of that meeting, which took place Oct. 13, then-board President Tommy Brown can be heard saying multiple times that the motion on the table was to approve the preliminary budget, which included a proposal from Morgan "to work for a year from home next year" and to be paid $37,564. In the end, the board voted unanimously to approve the proposal.

How that apparent previous approval affects the resolution the board approved at the December meeting was unclear.

Tom Owens, newly elected president of the board of trustees, said Monday that he was aware of Morgan's desire to come back to work as well as her contention that the board had already agreed to her terms, but he said he had just returned from a holiday trip and had not had time to review the matter.

At the next board meeting, Owens said, he "will talk to the board and see what their pleasure is."

Owens was elected president at the first board meeting he ever attended. He and two other people were named to the board by County Judge Gerald Robinson after Robinson and Mayor Shirley Washington attended the December meeting and said they did not like the fact that Morgan was going to be paid full-time benefits and allowed to work from home. They said it was crucial that the library's director be on-site, especially since the library system had just opened the new library on Main Street to the public.

As county judge, Robinson gets to select five members of the board of trustees while Washington, as mayor, gets to name six. One member of the board resigned, but Robinson replaced Brown and the other two board members with three new members, one of whom was Owens.

Ricky Williams, the library system's assistant director, said Morgan had been given the tools to work from home, which was her desire, and that he was a bit stunned with her decision to come back into the building.

"I don't know what to think right now," he said Monday afternoon. "I know she had plans to work remotely. I'm just rather surprised that she's coming back to finish out her term."

At the regular December board meeting, when the board declined to offer Morgan a contract that would allow her to work from home, Morgan tendered her resignation, effective April 2. She said she wanted to work remotely because of her age and other health factors that put her in a high-risk category for suffering serious consequences if she were to become infected with the coronavirus. But faced with being terminated, she will apparently return for about two and a half months.

"That's my retirement, and I am looking forward to it," said Morgan, who is 68. "It's been a long work career."