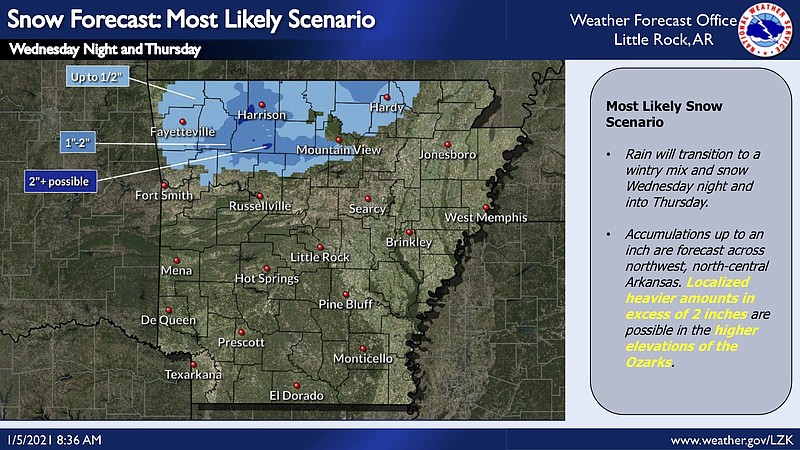 This National Weather Service graphic shows portions of northern Arkansas are expected to see snow Wednesday night and into Thursday.

Areas of the Ozark Mountains can expect anywhere from three to five inches of snow Wednesday night into Thursday, the National Weather Service reported with greater confidence Tuesday afternoon.

Outside of the Ozarks can expect anywhere from an inch to two inches of snow accumulation, according to the National Weather Service.

The weekend storm system expected is less likely to bring snow to southern Arkansas as the system is trending further south, according to the afternoon update from the National Weather Service.

A winter storm watch has been issued for parts of northern Arkansas from 6 p.m. on Wednesday to noon on Thursday, forecasts show.

Heavy rainfall is expected to begin across Arkansas on Wednesday, with chances increasing of snow accumulation in northern parts of the state, according to the National Weather Service.

Rainfall amounts are predicted to range from half an inch to two inches, a weather service briefing states. The rain is expected to begin over western Arkansas and spread east throughout Wednesday, according to the briefing.

Forecasters cautioned the rain may cause localized flooding, particularly in areas where rain has already saturated the soil.

Most areas can expect high temperatures Tuesday in the 40s or mid 50s, meteorologist Brian Smith said. Colder air is expected to move in Wednesday night and into Thursday morning, with most areas predicted to see temperatures in the 30s. Some areas in the southeast part of the state, though, will see temperatures around 40 degrees, Smith said. 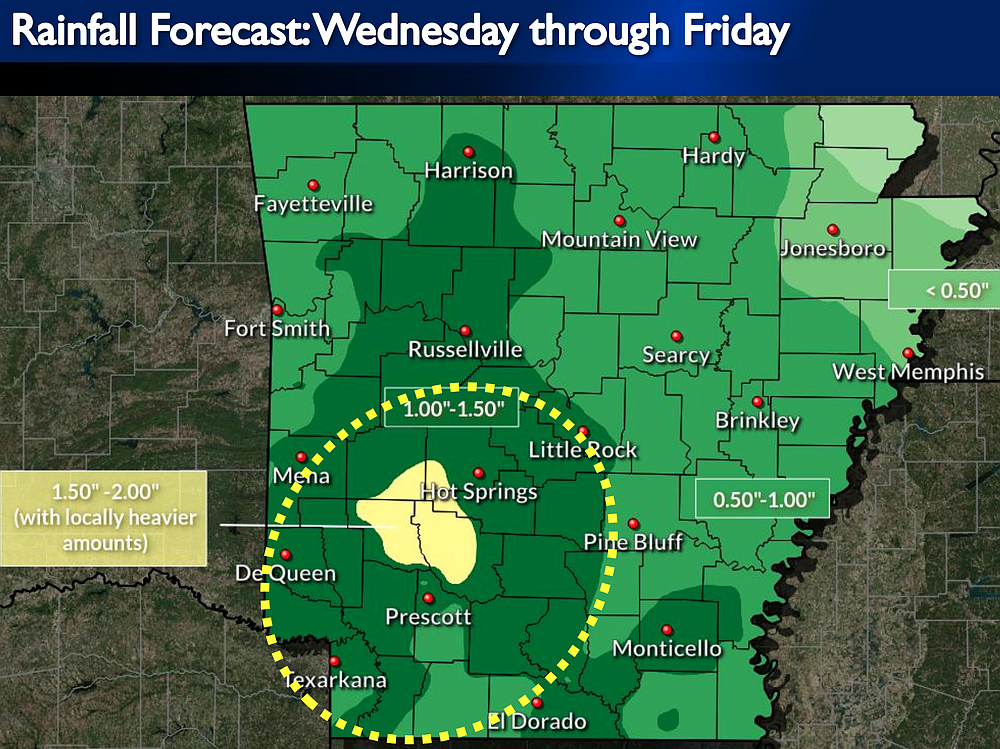 Forecasts from the National Weather Service show heavy rainfall expected to begin Wednesday across the state.

In the Ozark Mountains region, the wintry mix is expected to transition completely to snow between late Wednesday and Thursday morning, forecasters said. Predicted snow accumulation ranges from half an inch to more than two inches in areas with higher elevation, the weather service said.

Another storm system is predicted to bring a chance of snow Sunday into Monday in roughly the southern half of the state, including Little Rock, according to forecasters. Smith said uncertainty related to this storm system was very high Tuesday and adjustments are nearly guaranteed.