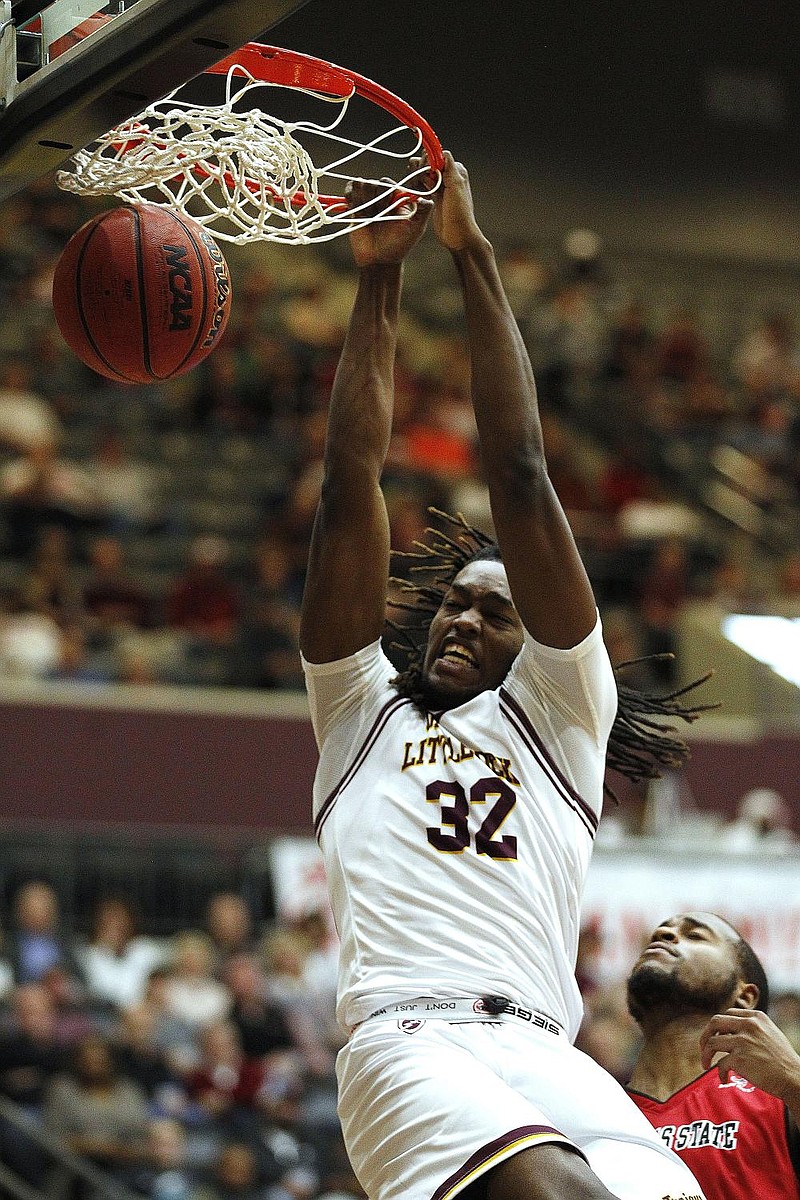 UALR’s Kris Bankston dunks during the second half of the Trojans’ 84-83 loss to Arkansas State on Saturday at the Jack Stephens Center in Little Rock. Bankston had 15 points as one of four Trojans in double figures. ( Arkansas Democrat-Gazette / Thomas Metthe)

Kris Bankston is a prolific dunker.

Bankston's attacks on unassuming rims are loud and aggressive, the kind that can bring a crowd to its feet and swing the momentum of a game inside the Jack Stephens Center.

Baskets across the Sun Belt got a reprieve when the redshirt junior suffered a season-ending lower back injury in November 2019.

He first felt discomfort during a practice early last season. The aches eventually morphed into a pain he could no longer play through.

"It was to the point where I could barely walk," he said.

Three games into his junior season, it was over.

He had built his reputation on violent dunks, but he never considered what the impact of landing after these feats was doing to him.

"I had two different doctors tell me that my back injury was caused by the way I exploded off the ground and landed on it," Bankston said. "I used to land very hard whenever I dunked. I never even noticed it."

After almost a full year of recovery, Bankston has returned to his role with the University of Arkansas at Little Rock. The 6-8, 220-pounder from Little Rock Fair has appeared in all nine games this season, providing the Trojans with 3.9 points per game on 68.2% shooting in 11.2 minutes per game off the bench.

Before Bankston returned to the court, he had to make-over the most crucial part of his game.

"For the past year, I've had to relearn how to dunk," Bankston said.

The UALR medical staff recommended a longer recovery over surgery last season. Bankston was granted a medical redshirt that preserved a year of eligibility.

The cruel truth about the injury was the same components that made Bankston an explosive talent were also what sidelined him for nearly 12 months. The upper body strength he used to fuel his grandiose dunks also put a tremendous amount of torque on his back.

"After every dunk, he would land and that put all the force straight from his feet, to his knees to his lower back," UALR trainer Micah Smith said.

Years of dunking, and subsequently landing wrong, finally caught up to Bankston.

When he was first sidelined, sitting for too long could lead to excruciating pain. Jogging was a struggle, too.

A pair of training teams put Bankston through physical therapy that slowly got him back to running and jumping. He also had to train himself how to dunk again, and more importantly, how to land when he did so.

Prior to his injury, Bankston let go of the rim after he finished a dunk, landed on his heels and leaned backward, concentrating his mammoth force toward his back.

Before his return, he was required to shift the landing to his toes and focused on coming down with his body as straight up as possible to distribute the force more evenly through his back and lower body.

Becoming comfortable with the new process in a live game took all summer and into the fall, and the process is ongoing.

"This injury is one that many people don't come back from or don't return back to the form that they were in," Smith said. "Some people would have hung it up. Kris didn't do that."

While still regaining strength, Bankston is making the most of his limited minutes.

In the conference opener against Texas-Arlington on Friday, the score was knotted at 14-14 when Bankston entered as the UALR offense was beginning to stagnate.

He quickly assisted on a Ruot Monyyong basket, then made a hook shot on the next possession. A few minutes later, a glimpse of the old Bankston re-emerged.

After an errant Texas-Arlington pass, Bankston threw down a lob from Yacine Toumi and hung on the rim for some extra flourish. On the next possession, an Isaiah Palermo pass sent Bankston into a fast break all alone. With nothing but the basket in front of him, he cocked back and threw down another slam.

Suddenly, the Trojans led by eight.

"I really enjoyed that," Bankston said. "My body feels good. I love coming off the bench to bring a burst of energy to my teammates."

The limited crowd inside the arena didn't feel so quiet at that moment, and the buzz remained even after Bankston's feet -- toes first -- returned to the ground.