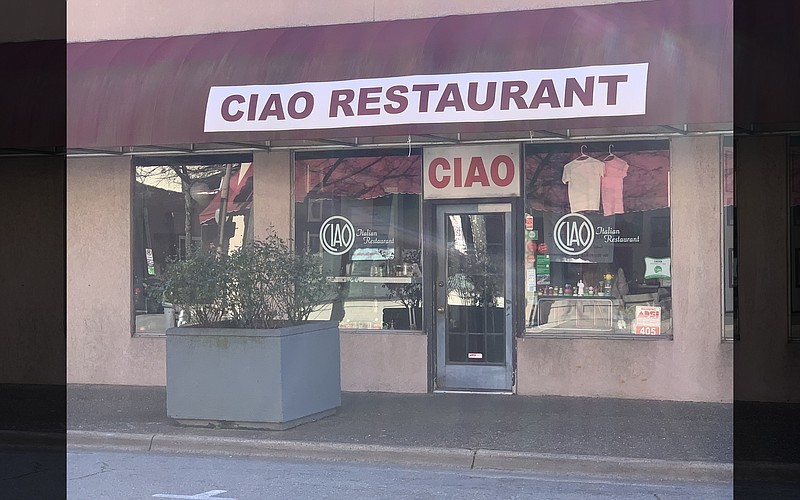 Becky Mobly, owner of Ciao Italian Restaurant, 405 W. Seventh St., Little Rock, said "ciao" to her customers in a final Facebook post Monday: "It has been fun having my own little world at Ciao. I appreciate every person who participated in it. I have loved taking part in your birthdays, anniversaries, rehearsal dinners, new babies, and everyday lunches and dinners. This adventure has come to an end [and] it is now time for a new adventure in this unpredictable world. Lots of love from your friends and family at Ciao." Suzanne Boscarolo opened the restaurant in 1985; she later also opened a "branch," Ciao Baci, in 2001. Mobly took Ciao over in 2004 after working there for a little over a year.

The Menchie's Frozen Yogurt outlet in the Promenade at Chenal, 17801 Chenal Parkway, Little Rock, has closed — permanently, according to a sign on the door. Co-owner Todd Rivers posted this on Facebook Sunday: "Sadly, Renee and I have made the tough decision to permanently close our Promenade location. ... This past year simply presented challenges we were unable to overcome. Our Bryant store will remain open, and we invite each of you to come see us there." That store is at 7301 Alcoa Road, and the phone number there is (501) 794-6070.

Work continues on Restaurant Bar Mar y Tierra, in the eastern half of the brick building at 1900 W. Third St., Little Rock. Owner Gracie Soto says she still does not have an opening date. But she has a request pending with the state Alcoholic Beverage Control Division for a license to sell alcoholic beverages for consumption on the premises and a permit to sell beer at retail to be carried out and not consumed on the premises. The menu will consist primarily of steak and seafood; tentative hours are 11 a.m.-10 p.m. daily. The space has housed many eating and drinking establishments, the latest of which was Satchemo's Bar and Grill; previous occupants include, not necessarily in this order, Twelve Modern Lounge, Star Bar, Cove Ultra Lounge, Special T's Sub's & Catering, Mr. Nelson's BBQ, Blues & Entertainment and The Italian Couple. The west half, currently vacant, formerly housed Warehouse Liquor.

Meanwhile, something is going on at the neighboring vacant, revolving-door space at 1706 W. Third, on the other side of a railroad overpass, that most recently housed The Capital's Seafood House and several places before that. We've spotted on more than one occasion a yellow pickup truck parked out front with the door open. We may be nearing the resolution of a long-standing mystery — the building has been vacant for more than a year, since the Seafood House closed in November 2019, but there has never been a "for sale" or "for lease" sign out front.

We reported some time back on Jeff Franklin's project at 724 S. Woodrow, near the Woodrow Street exit from Interstate 630, which originally was to include a farm-to-table restaurant. Franklin says the pandemic and the resulting hits to the restaurant industry have moved that part of his plans a couple of years down the line, but he is making progress on some of the other elements, including an indoor garden and a open-24/7 solar-covered charging station for electric cars. He is looking initially to incorporate a wine bar and has a spot for a food truck, with hopes to be up and running by early July, depending on the weather and the speed of his construction crews. Franklin (whose 16 years in the restaurant business included stints at Capers, Corky's and Buffalo Grill), says he listened to his advisers in delaying the restaurant until the industry has recovered more fully, and "thank God I didn't take out a loan for that before 2020." Meanwhile, he is also making progress on renovating the building next door, at 704 S. Woodrow, for an artists' colony, and he has a similar "21st Century filling station" project also just getting underway in Hot Springs.

Those working on Blue Heaven, going into the former Ed and Kay's at 15228 Interstate 30 North, Benton, say they still don't have a target opening date but hopes are for the place to be up and running sometime in the vicinity of Valentine's Day. This post appeared Dec. 31 on the Facebook page, facebook.com/BlueHeavenBenton: "Bar tile and mirror work in progress! Keep your eyes on our page for an estimated opening date. We hope to have one to share with you soon!" Oh, and the answer to a trivia question on the Facebook page — how many restaurants have occupied the building — is five, including Blue Heaven: Pat's Cafe, Ed & Alma's, Ed & Kay's and Bruno's Italian Villa. Ed & Kay's occupied the building for more than two decades before closing in mid-2014.

And our report last week on the new outlet of Marco's Pizza at 3701 E. Johnson Ave., Jonesboro, included a nonoperative telephone number. A representative of the chain has supplied a new, correct one: (870) 393-5656.