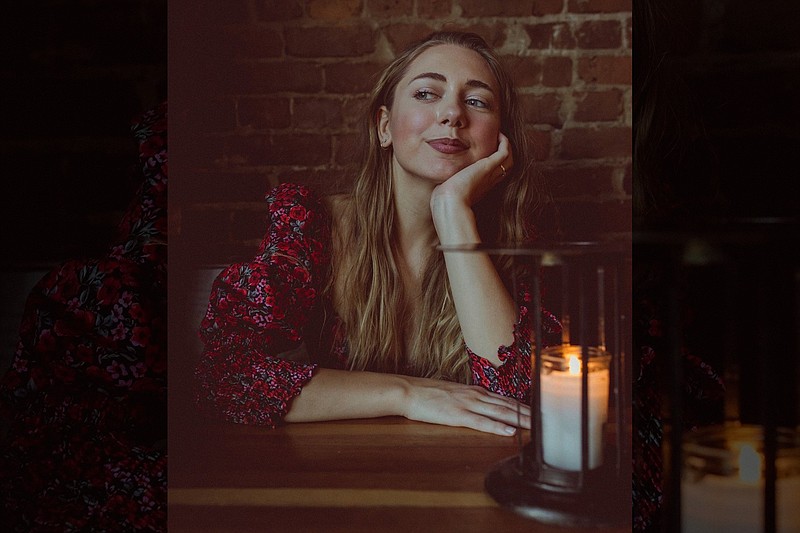 Multi-instrumentalist and singer-songwriter Ashtyn Barbaree plays the River Bottom Winery in Roland on Saturday. (Special to the Democrat-Gazette)

Ashtyn Barbaree, an acclaimed young singer-songwriter and geologist from Fayetteville, will perform from 3 to 5 p.m. Saturday at the River Bottom Winery, 13810 Combee Lane, Roland.

Barbaree, who plays tenor ukulele, guitar and bass, has been praised by the House of Songs in Bentonville as "one of the hardest working songwriters in Northwest Arkansas." She was part of the 2018 Songwriter Summit in Northwest Arkansas and she then was chosen to perform in Montreal at the Folk Alliance International.

A former music conductor at TheatreSquared, Barbaree — who began performing when she was 15 and had worked her way up to 300 shows a year before the virus — released her debut self-titled EP in April 2018. She is currently writing and recording her first full length album to be released this year.

◼️ Lance McDaniel will perform from 7 to 10 p.m. Friday, at The Library Kitchen & Lounge, 313 President Clinton Ave., Little Rock. McDaniel, a native of Marked Tree, is the lead singer of The ShotGunBillys

The Sam Allbright Band will perform from 8 to 10 p.m. Saturday at Kings Live Music, 1020 Front St., Conway. Admission is free.

Lazy Daisy is a cover band made up of Murray Williams and Chanika McLelland. They've played together in Northwest Arkansas since 2013.

Feelin Groovy will perform a 1960s and '70s show from 4 to 8 p.m. Saturday at the Desoto Club and Grill, 100 Clubhouse Drive, Hot Springs Village.

The International Bluegrass Music Association Women in Bluegrass Summit will be held at 11 a.m. today on Zoom (which is full, but can be viewed on Facebook) with panels on gender equity from renowned artists and women in business, as well as presentations on feminism and the history of women in bluegrass.

◼️ Arkansas Sounds Presents: K.T. Oslin, from 7 to 8 p.m. today in an online event hosted by the CALS Ron Robinson Theater. Country singer Oslin, who was born in Crossett, died Dec. 21. Check it out at ronrobinsontheater.org.

◼️ Rufus Wainwright will perform side one of his album "Release the Stars" at 4 p.m. Friday. Tickets are $20 in advance, $25 on Friday, available at rufuswainwright.veeps.com.

◼️ Joan Baez Mischief Makers 2: An Intimate Evening with the Artist will be held at 7:30 p.m. Saturday on Facebook. Admission is $18 in advance, $24 the day of the event; available on go.seated.com. The archived stream will be available until Feb. 14.

Baez is marking her 80th birthday with a reception and a second showcase of her portraits of people making the world a better place, which opened Jan. 6 and runs through Feb. 14 at Seager Gray Gallery in Mill Valley, Calif. The event will include an interview with Baez, a virtual tour of the show and other festivities, along with "mischief" to mark the occasion.

◼️ Hayes Carll will be featured on "Sundays with Mary" at 2 p.m. Sunday on Gauthier's Facebook page. Mary Gauthier hosts the show.

◼️ Bill Jagitsch, renowned for building cigar box guitars when not repairing Apple computers, will do a live-stream on his Facebook page at 8 p.m. Sunday, which he does each Sunday.

Down in El Dorado, plans have been announced for the second annual Mad Battle on Feb. 20, when seven bands will compete for a $2,500 grand prize. Bands include Crutchfield, deFrance, Fox Eating Foxes, Jasper Wilderness and Jimmy Lewis & 8 Second Ride. There will be two more "wild card" bands added, and here's the scoop on that: The two will be chosen by a fan-based vote via Facebook. Fans can begin voting for favorite band's video beginning Monday on the Murphy Arts District's Facebook page.

Votes will be counted by the amount of "likes" or "loves" per video. The top two videos will be announced Jan. 18 and those two bands will join the announced five bands on Feb. 20 in First Financial Music Hall for a 6-10 p.m. concert. For more information, visit the Mad Battle video album via Facebook.

GONE, BUT NOT FORGOTTEN

Let's ease into 2021 by mentioning some of the music-making folks who left us in 2020, some of whom came to Central Arkansas, some of whom even came more than once, to share their passion with those of us who enjoyed hearing them: John Prine, Billy Joe Shaver, Jerry Jeff Walker, Peter Green (of Fleetwood Mac), Little Richard, Eddie Van Halen, Tony Rice, Charley Pride, Adam Schlesinger (of Fountains of Wayne) and Justin Townes Earle.

Earle's father, Steve Earle, just released an album of his son's songs, "J.T.", on Monday, which would have been his son's 39th birthday. Proceeds will go into a trust for his son's 3-year-old daughter, Etta St. James Earle. The album is Steve Earle's third tribute album: he also did tributes to his friends Townes Van Zandt and Guy Clark.

◼️ A year ago, my wife, Vicki, and I hit the road for an event that was new to us, the 30A Songwriters Festival, which featured music in some 25 venues of varying sizes and styles Jan. 17-20 in South Walton County, Fla. (and encountered three Little Rock music fans there: Gregory and Stephanie Ferguson and Arnold Goodman). We saw great music there and experienced the first of the great shared sadness that came to define 2020, when singer-songwriter David Olney died on stage (apologizing and then closing his eyes) during a performance which also featured Amy Rigby and Scott Miller.

We were on our way to that show, but got lost and missed the start of the show, arriving as we were hearing the sirens of emergency vehicles whose professionals could do nothing for Olney.

We didn't have to pick and choose among the shows, since none of them ever happened, not even the ones that were rescheduled. "Oh, well," as Fleetwood Mac once sang, in one of my favorite rock 'n' roll quotes.