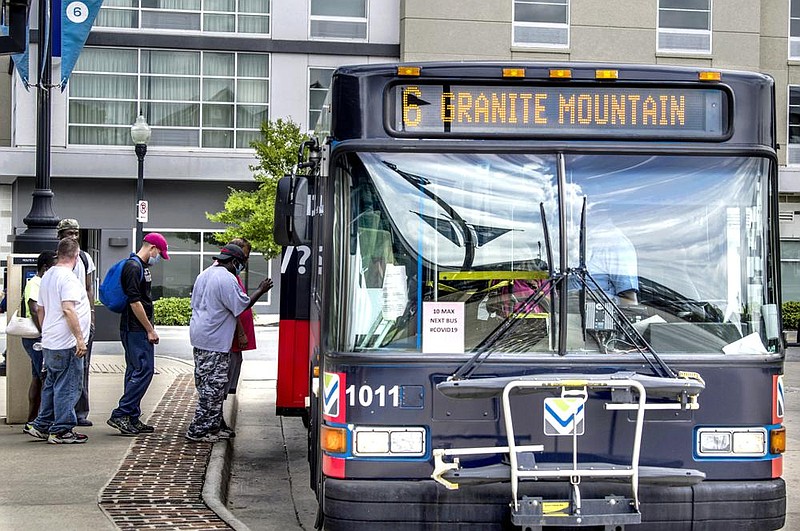 A Little Rock man fighting a misdemeanor conviction for threatening a bus driver has made more than 300 threatening phone calls to the driver's employer, Rock Region Metropolitan Transit Authority, and its lawyers over the past six weeks, the agency said in a petition Friday asking a Pulaski County circuit judge to order the man to stop his campaign of "retaliation" and "harassment."

The bus service is concerned that Charles Erwin Askew, 59, might act out against the agency or its employees at any moment. Askew, a one-time murder suspect who did prison time in the 1990s for drug dealing and terroristic threatening, has been feuding with the county bus service since at least 2015 because Rock Region Metro has repeatedly barred him for threatening its drivers, court records show.

Since Dec. 1, he's left 304 threatening voicemails at the offices of Rock Region Metro's lawyers, the Cross, Gunter, Witherspoon & Galchus firm in Little Rock, according to the petition.

The Wednesday messages came a day after U.S. District Judge D. Price Marshall dismissed Askew's 2019 civil rights lawsuit against four Rock Region workers who he claimed had conspired to retaliate against him for complaining about how they had barred him from riding the bus.

Citing the Arkansas Workplace Violence Prevention Act, Rock Region's lawyers are asking Judge Herb Wright to immediately order Askew to stay away from its offices at 901 Maple St. in North Little Rock and 310 E. Capitol in Little Rock and to stop calling its employees, and bar him from its buses.

Rock Region is turning to the court after repeated police intervention has failed to dissuade Askew from going after the bus service and its employees, according to the petition.

"METRO is extremely concerned that Mr. Askew intends to act on his threats, which -- based on his last voice mail -- may occur this weekend," bus service attorney Abtin Mehdizadegan wrote. "These threats are not idle. Metro employees witnessed Mr. Askew loitering near its property in a silver sedan ... on or about January 5, 2021."

Askew also should be ordered to stay away from the law firm at 500 President Clinton Ave. and be prohibited from calling the lawyers, the transit agency said.

Regarding the federal suit, Mehdizadegan noted that one of Askew's court-appointed attorneys quit his case after reporting she had received 108 "rambling and threatening" voicemails and phone calls from Askew, which made her staff afraid that he would act on those threats. At that time, the judge also ordered Askew to stop calling him, court filings show.

Askew was convicted of misdemeanor criminal trespassing and terroristic threatening in July 2019 in Little Rock District Court. He was given a one-year suspended sentence and ordered to pay $430 in fines and court costs. He's appealing that verdict to Pulaski County Circuit Court.

Among his complaints in his dismissed federal suit were accusations that employees had put him on speakerphone to mock his voice when he called to complain about how he was being treated. Askew is mostly deaf and his voice is distinctive, according to court filings.

About six months before Askew filed that civil rights suit against the bus service, he tried to launch another federal suit that named a bus driver, seven supervisors and the agency's executive director, claiming they had violated his civil rights. That October 2018 lawsuit was dismissed almost immediately, even before Rock Region lawyers had responded.

He complained in the handwritten suit that bus drivers "were playing shenanigans, antagonizing, aggravating, stigmatizing plaintiff then stonewall [sic] plaintiff with character assassination." One defendant tried to run him over while others lied to police that Askew had threatened another Rock Region worker, Askew wrote.

In 1992, Askew was sentenced to 20 years in prison after pleading guilty in separate cases to marijuana trafficking and terroristic threatening, court records show.

In October 1983, Askew was acquitted of second-degree murder over accusations that he fatally shot a 25-year-old Little Rock man, Jefferson Ray Allen, in April 1983 following a fight near the intersection of Wright and State streets.

According to newspaper accounts, Askew testified that Allen shot first, nicking his hand, and that he had returned fire in self-defense. Askew said Allen and some other men were mad because he had given a statement to police about a homicide case.